Everyone get a pencil and some paper. I’m about to drop some knowledge. Ready? Write this down. It’s the recipe for A Good Time.

1 bicycle (It can be a road bike, a mountain bike, a fixie, a singlespeed, a 10-speed, a cargo-bike…whatever, as long as it has two wheels and handlebars.)

6 cans of cheap beer.  (Not just any canned beer, cheap canned beer, because you’re probably going to accidentally crush a can or two. Pabst is fine. Coors works. Avoid local—it’s a sin to waste local beer.)

That’s it, that’s the game, which I’ve named A Good Time. Fastest time through the cans (out and back) wins. The beauty of this game is in its simplicity and portability. You can play it anywhere—in your driveway, at the trailhead after a ride, in the parking lot of a PTA meeting…Obviously, the closer the can placement, the harder the game, so I’ll leave that element up to your discretion and ability.

Now, if you really get into the spirit of A Good Time, you’ll create a series of bike skills/drinking challenges to fill out a complete pentathlon of events. May I suggest a bunny hopping/keg stand challenge, and a track stand while drinking a beer challenge (you’ll need a designated beer holder to stand next to the biker with this one). And while you’re in the mood, why not spend hours developing a point system and crafting some sort of trophy for the overall winner of this Epic Bike/Beer Pentathlon. Maybe, something like a bike helmet that holds and dispenses two 12-ounce beers for hands-free biking and imbibing. (See below). 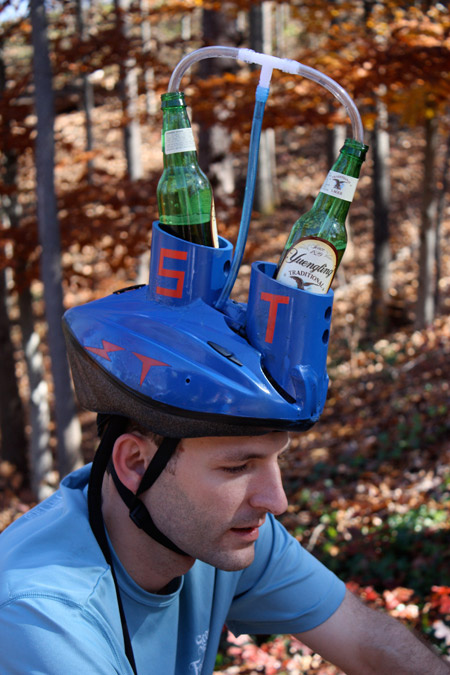 Follow Graham Averill’s adventures in drinking and Dad-hood at daddy-drinks.com