I’m a slow healer and my scabs are just now peeling (this was a few weeks ago when I started this article). A few weeks have passed since the Trans-Sylvania Epic and it’s taken about that long to find a moment to settle down.  Stage racing, although challenging, is more about vacation than anything else.  It’s a chance to see a new place, enjoy others company, and to indulge in the petty nuances of bike racing. With a full life of work and kids, taking the time to make it to the race was no small thing, but, with a fresh batch of chocolate raisin oatmeal cookies, a complete and professional assembly of tools and camping supplies, and a few hidden inspirational note cards, Trish sent me off like a kid to camp. This was going to be a treat.

State College is not such a far drive from Asheville as it turns out.  I was lucky enough to make the trip with the everywhere legend, Jon Stang.  A lifetime of stories to catch up on, and a new one in the making, make time roll along like a Virginia ridge line.  Nolichucky, Holston, the New, the Roanoke, and the Shenandoah, they flowed by, some going east and others west. Beyond that, the terrain takes on its less familiar Pennsylvania form, the ridges veer to the east and the roads go this way and that. Mennonite farm country and small ridges are overrun with oversize highways. In between the roads and the farms, the wilderness remains, unaware of any changes beyond. Uniformly rocky, ferny, and wooded, the terrain is green, and rugged; the trails are well built but un-groomed. 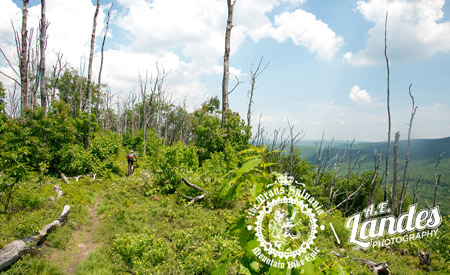 With a fairly successful spring training drive and a feeling of form building, my hopes were high coming into the race. My weight was a little below average, my power seemed high, my bike was ultralight, and my tires correct. I raced hard in the prologue and got 5th, 4 minutes off Justin Lindine. I thought I was going fast but apparently not enough. “Ok” I thought, “what now?” I came for competition and competition is what I got. I spent the night trying to figure out which tools not to carry and scheming about my moves on day two.

I felt a little better the next day, warmed up, and focused. I’m glad I wasn’t just in town for a two hour Norba XC because what lay ahead was a week of battling at blistering speed.  The courses are generally shy of three hours for the leaders and as a result the pace is relentless.  I rode a wave of motivation into the first singletrack climb on day two; it was rocky, hard just to stay upright and moving forward.  I know better than to look back but I never had the chance anyhow.  The rocks were riveting, there are no lines, only the line you invent with the your body English; it’s hard stuff.  The constant threat of sabotage left its mark early on my face.  I went for a big move up on rock to the right to avoid a pile of little sharp rocks, going over the bars I waited too long to eject and couldn’t get my hands in front of my face.  I knocked my teeth on a rock and broke the front two but no blood.  Scrambling back on and pushing even harder I kept about a minute lead for the first half of the race before a proper introduction to the competition.  Justin Lindine and Brian Matter charged from behind on a double track climb and kept the pace high.  They made it clear that I wasn’t going to gain anything in the singletrack no matter how rocky and Justin, at least, made it clear, that he had no weakness whatsoever.  In the end I couldn’t quite match Justin’s pace on the last climb, I felt successful by only losing two minutes and getting 2nd.  I went harder for three hours than any effort of any length since wearing a heart monitor, harder than I ever thought I could, I was getting what I came for. 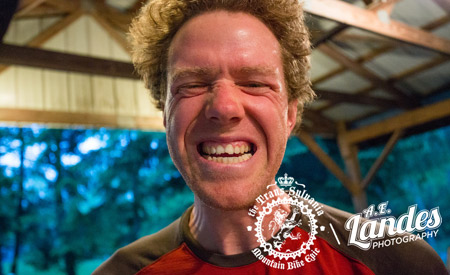 The rest of the week, for me, became a close battle for second place, a chance to reflect on a lot of old memories, racing and otherwise, and a time to camp out.  The venue is about perfect for such an event, a boy scout camp surrounded by state parks and miles of singletrack.  The race has a fun, and professional character that can be both relaxed and serious as the mood demands.  The racing is top notch and the courses are challenging but makable by the majority of the peloton.  The evening slide show and the daily films are a lot of fun, seeing the pictures solidifies a memory and gives you a chance to relive the day in a different light. 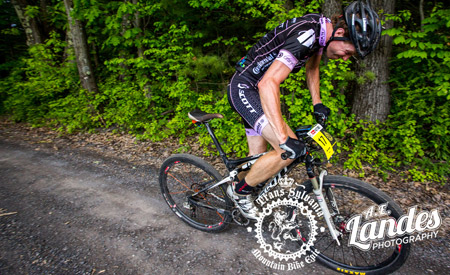 I left the race feeling like it was a success.  Every category had a real race, including a strong U25 men’s field.  My legs were toasted seven times over.  I felt pretty well versed on what central PA looks like on a mountain bike.  With my mental map enlarged I returned to Asheville to pick up work where I left off.  In the weeks following the race I’ve managed much less riding, which more than proves the point that for me having an event on the calendar that I’m excited about forces me to get out and ride.  Some downtime has not been too bad but its about time to start scheming about 2013 phase two, Colorado Trail bike packing in August with my wife Trish, Shenandoah 100 on Labor Day weekend, and Pisgah Stage Race after that; with a big price decrease, Pisgah’s looking like the working man’s stage race.  I hope it pulls a strong field.  All right, the motivation is returning, I’m ready for the next adventure.  Check out these links: Prologue, Stage Two – Coopers Gap, Stage 3,  Stage 4 – Enduro, Stage 6, Stage 7.