It was sitting there in my garage on the far back shelves—in a dusty place where ancient gear and electronics, and a troubling number of mice, go to die. I stumbled upon it when I was rummaging for an old, trusty The Clapper to hand down to my seven-year-old son. I’m referring to my long-distance backpack. I bought it in Fairfax, Va., in 1995, back in the era when my wife and I were young, living in sin, and making preparations for an Appalachian Trail thru-hike for the following year.

Since then, the pack has outlived its purpose. I’m a harried dad of two young kids now, and when I’m not yelling at them or driving them to and from soccer practice—or doing both at the same time—I don’t have the energy to lug several days’ worth of supplies on my already chronically aching back. Don’t get me wrong, I still love sleeping under the stars, serenaded by cricket chirps. I just want to do it on an inflatable queen-sized mattress after shutting down the electric generator and putting away the popcorn popper. That’s right, I’ve gone to the dark side. I’m now a car camper.

Before all you long-distance backpacking purists start spouting off about the “true outdoor experience,” I have to warn you: there’s a sporting chance that when you settle down and have little ones, you’ll become one of us—and like it. We car campers turn the campgrounds of the Blue Ridge into our own little rustic islands of good-living party time. Yes, it’s true that the amount of gear we bring isn’t measured in cubic inches. Nor do we generally crap in the woods, thank you very much. And our idea of cutting edge performance apparel is an official NFL gameday jersey. But wait until that first time when you cook over an open fire (started by gasoline, if you really go old-school). You won’t be able to stop the words “Good times!” from spewing from your mouth like beer from a shook-up can of Budweiser.

This is not to say that letting the old backpack collect dust in the garage has been easy. It served as my trusty companion as I hiked literally thousands of miles on the trails, alternately being soaked in near-monsoons, coated with ice, and baked in the summer sun. It sprinted with me from a bear in the Smokies, and was once raided by a Snickers-hunting skunk in Shenandoah National Park. The transition to car camping wasn’t quick, either. It occurred gradually, after my daughter was born nine years ago.

At first, as a new dad, I still got to escape once in a while to go backpacking with the guys. The wife and I also got to escape into the backcountry a couple of times, asking family to do the babysitting. But over time, the backpacking trips dwindled, and then stopped altogether.

Our first attempt at spending a night in the tent with the kids occurred in the backyard, when our daughter was three and our son was two. It went so well that we soon started packing up the car and heading to a local campground for a night. And then two nights. And then, vacation time permitting, sometimes three or four. We initially used all of our lightweight backpacking equipment—the micro-sized headlamps, the titanium sporks, the coffin-sized tent. The wife would still prefer to do it this way, frankly.

But I couldn’t help jealously eyeing the nearby campsites, pulling out their shiny hatchets to chop firewood–even though they could buy an armful of logs from the nearby camp store for a couple of bucks—and lovingly adjusting their satellite dishes to just the proper angle facing the brilliant night sky. Naturally, I wanted to be just like them. I began by buying a Coleman camp stove. With a griddle, of course. The kind with legs so it can stand alone—also ideal for tailgating, by the way. The next purchase, over the course of many months of saving and planning, was a pop-up canopy to place over the campsite picnic table—with the optional bug netting accessory to drape around it, so I could leave a bowl of potato salad out all day without fear of flies diving into it. 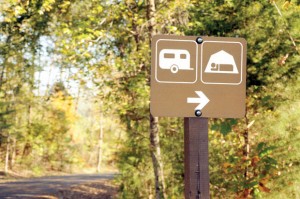 The wife grudgingly got into the spirit by picking up a couple of telescoping forks for roasting hot dogs and marshmallows over the fire, and shortly after, a gas lamp that was so blinding it made our car’s halogen headlights seem like dull embers. Her biggest concession was giving the go-ahead for an inflatable mattress. I got one that was “raised and flocked” according to the box. I’m not sure what raising and flocking is, but I like it.

I feel like the point of no return for my transformation into a car-only camper came with the purchase of the 80-quart cooler, named something awe-inspiring like the Cooltastic Chillmaster Extreme. It’s big enough to hold 106 beer cans (with ice) so you can rehydrate yourself all morning, afternoon, and night, and not run out. It even sports two studded off-road wheels that look like they were pried from an ATV. I took it with us this last Memorial Day weekend when we reserved a group campsite in the Smokies with a few other families. Their jealousy brought me great joy.

I still have a way to go before completing my car camping equipment arsenal, though. My family still only sleeps in a cozy four-person tent, though I’m eyeing a condo-sized one that has a separate room for the kids. And though I was kidding earlier about the electric generator, I could envision myself someday sitting in one of those camp chairs (with the footrest, of course), my camouflage jacket blending me into the surrounding woods like a chameleon, as I watch college football on satellite TV while enjoying fresh air of the great outdoors. Dare to dream. Sometime, years down the line when the kids are older and bigger, I’m sure we’ll buy some new backpacks, and return somewhat to our minimalist camping and distance-hiking ways. But not today. Please pass the gasoline.