When you think of the word “dirtbag,” what image comes to mind?

Maybe a crusty climber perched in the back of a DIY van-house eating Chef Boyardee out of the can with a pocketknife? That certainly sounds about right, at least from what a quick cruise through the #dirtbag Instagram feed will tell you. Barefoot hula-hoopers. River rats. Surf bums. Couch surfers. They all seem to fit the bill for a grade A dirtbag.

But what if I tossed the word “entrepreneur” into the mix? While a dirtbag entrepreneur may seem like just another oxymoron (like tight slacks and jumbo shrimp) the fact of the matter is the outdoor industry is ripe with them: from renowned climber-surfer Yvon Chouinard and his company Patagonia to paddler Eric Jackson and his kayak manufacturing company Jackson Kayaks, those outdoor brands on your clothing tags weren’t just started by dirtbags – they were started by innovative pioneers who combined their love of the outdoors with a steadfast commitment to providing quality tools for adventure. Although a booming interest in adventure sports contributed to serious growth among brands, the little guys are still out there making gear that competes with even the biggest cats on the market. Misty Mountain and Organic Climbing are two of those smaller companies who just so happen to be producing some of the highest quality climbing gear in the industry right in our backyard. From the crag to the shop and back again, these dirtbag climbers might have spent more nights sleeping under the stars than in a bed, but their stories are a testament to the greatness that can come out of following your passions.

“A really good friend of mine had gone to summer camp and went rock climbing. That was 1980. He knew very little about it, but we got a rope, got some shoes, a little bit of gear, and just climbed basically by trial and error. Fortunately the errors weren’t too…erroneous.”

The Birth of Misty Mountain

Although Grimm was not the original founder of Misty Mountain, he joined the company’s mastermind, Woody Keen, in 1985, the year the business was officially incorporated. At the time, the standard climbing harness was a “Swiss-seat,” which was fashioned from either rope or webbing by way of adjustable knots. Woody’s first harness prototype, the Fudge, introduced a buckle to the harness and was such a success that it quickly became the standard for organizations like Outward Bound.

Grimm was just a college student at the time but he had a very tangible obsession with climbing. Just over a decade later, he would buy Woody’s share of the company and become co-owners of Misty Mountain with longtime friend and climbing partner Goose Kearse.

“When you’re sitting on a belay ledge, you have a lot of time to think about how [your harness] could be better,” says Grimm, who is now responsible for the design and production of Misty Mountain’s harnesses. “I’m the number one guinea pig,” which for Grimm means long hours behind the sewing machine eventually translate to long days on the rock testing equipment and embracing Misty Mountain’s humble beginnings in the mountains of western North Carolina.

“We used to live in a river valley in Minnesota, so there were tons of cliffs on our property,” says Helke. “Growing up, climbing was what we did as family trips.”

The Birth of Organic Climbing

After college, Helke and his wife decided to do the most logical thing for two adventurous people who wanted to climb, travel, and scout locations for graduate school: they lived on the road.

For one year, the couple traveled across the country, living, working, and playing out of the back of their Toyota Tacoma. They hit all of the major rock climbing hubs, from southern Utah to western Colorado and Wyoming. It was then, during their time in Wyoming, that Helke decided he wanted to start producing his own climbing gear, specifically bouldering pads.

“In the late ‘90s, there were definitely people that bouldered, but they were typically people that were a little more anti-establishment,” he says. “I’ve seen [bouldering] grow from a skateboarding, alternative culture to a pretty mainstream sport.” 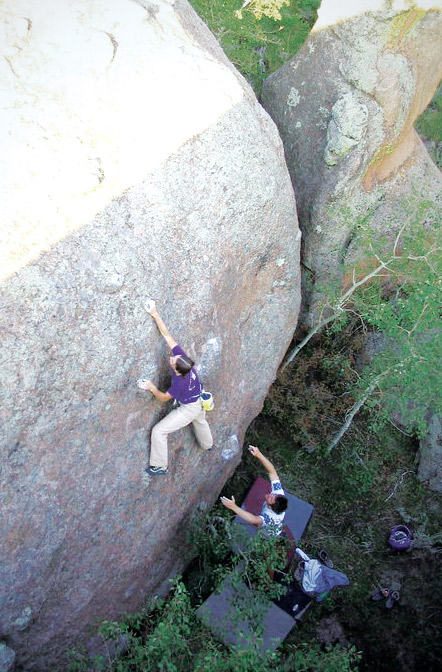 In 2004, Josh officially incorporated Organic Climbing and that same year, both Rock & Ice and Climbing Magazine wrote up stellar reviews of Organic’s bouldering pads which sent business through the roof.

“It very quickly turned real,” Josh remembers. “All of a sudden, I wasn’t going climbing everyday and I couldn’t keep sewing everything in a spare bedroom.”

He moved the business to Philadelphia when his wife, a geologist, was offered a job in the area. Organic’s bouldering pad is still their flagship product and has quickly become the standard pad in the bouldering scene.

“It sounds cliché but to anyone looking to start [an outdoor gear company], stick with your gut,” he says. “When I started, everyone we talked to said it was impossible to make all of our products in the U.S. Now, we’ve had 10 years of amazing success. So don’t worry about what others think. Throw convention out the door and keep going.”