EnvironmentThe Forest Service Is Protecting Pipelines Instead of Public Lands

The Forest Service Is Protecting Pipelines Instead of Public Lands 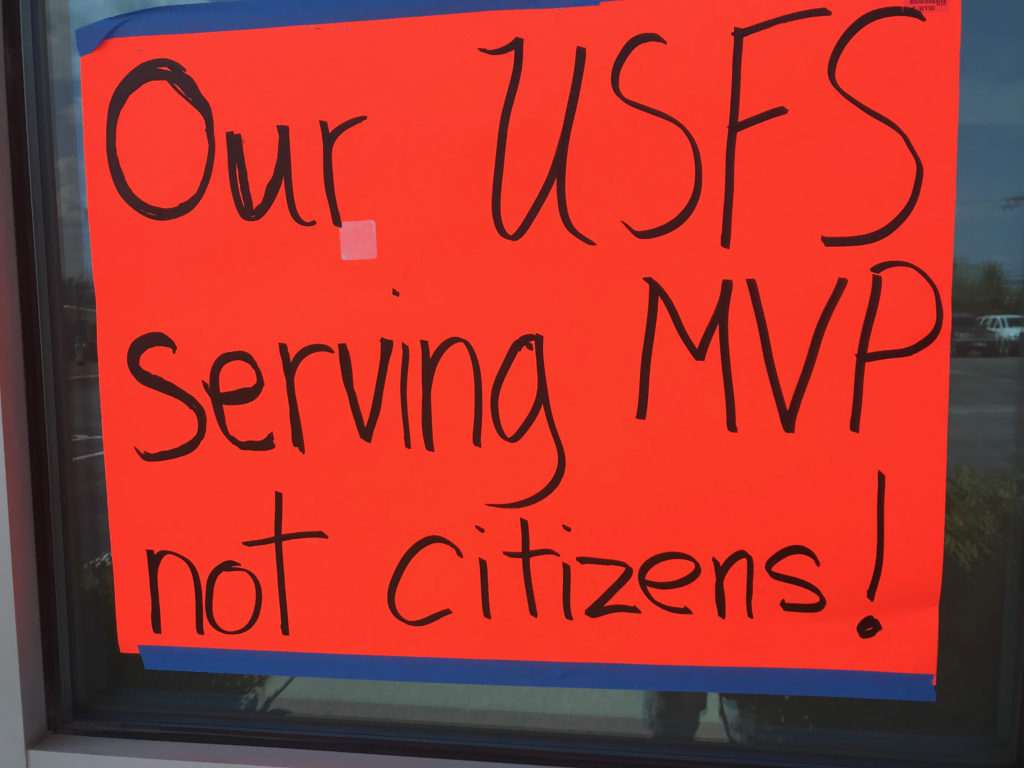 With multiple tree sitters in Jefferson National Forest blocking the path of pipeline construction crews, the United States Forest Service (USFS) has responded aggressively. They have denied food and water to tree-sitters, blocked support and medical attention from reaching them, and have essentially acted as a private security force for the corporations behind the Mountain Valley Pipeline.

When the tree-sitter known as Nutty went up in the monopod blockade that blocked a forest service road for 57 days, the Forest Service’s response was to cut off her access to food and water, set up 24-hour surveillance underneath her suspended platform, and attempt to bully the public into submission by arbitrarily arresting observers and shining spotlights on the support camp and monopod all night long. USFS subsequently enacted similar blockades around the tree-sits of Deckard and Fern.

Yet the United States Forest Service is responsible for “managing public lands, helping people share and enjoy the forest, while conserving the environment for generations to come.” On their website, they claim that “some activities are compatible. Some are not.” The act of allowing an external non-government organization to exploit and destroy large areas of National Forest for their own private gain, and to actively aid in the construction of this pipeline, seems to goes against the very purpose of the agency. This 42” diameter fracked gas pipeline would be drilled under mountains and through unstable karst terrain, and would cross numerous fragile wetlands and streams. Its presence would not help “to sustain healthy, diverse, and productive forests and grasslands,” but instead would do the opposite.

The Forest Service has the power to review projects and reject any use of public lands that would cause irreparable harm to forest function. Instead, they chose to make amendments to the region’s Forest Protection Plan in order to relax regulations that otherwise would have prevented this pipeline from moving forward. In early May, the 4th US Circuit Court of Appeals heard arguments in Sierra Club (et al.) v. U.S. Forest Service. Chief Judge Roger Gregory noted that the Forest Service was initially highly skeptical of Mountain Valley’s assurances that its erosion and sediment control measures would be 79 percent effective. But as the approval process neared an end, the agency backed down. “I call that capitulation,” observed Gregory. In addition to acting against its own stated mission, USFS contravened the oath taken by all federal employees to “support and defend the Constitution of the United States” when the Forest Supervisor for Jefferson and Washington National Forests, Joby Timm, ordered a series of “emergency closure orders” under false pretenses.

The Forest Service does have the authority to close certain areas of National Forests, however, their Federal Register states:

“time, place, and manner restrictions are unconstitutional if they are ‘designed to suppress expression’ therefore, the Forest Service can apply these regulations as long as the purpose is not to overpower the constitutional rights of the public and press.”

Joby Timm implies the real reason for the closure orders in his recent statement to Rolling Stone: “Current law and federal policy emphasize the important role of national forests in energy generation and transmission.” As Timm indicated when he revised USFS rules to accommodate MVP, his decisions are meant to support the call for expedited environmental review processes for “high priority infrastructure projects” in an executive order signed by President Trump last year.

Timm’s statements, along with the timing of the five different closure orders in direct response to the appearance of aerial blockades, implies that the closures were put in place not for “public safety” but to suppress the protests and expedite the construction of the pipeline, which infringes upon First Amendment rights. A lawsuit brought against the USFS in early May by Virginia Senator Chap Petersen argues these same points.

In clear defiance of public sentiment, the United States Forest Service has become a private security detail working for the Mountain Valley Pipeline. They have strayed far from their intended purpose and instead turned into a bureaucratic institution more interested in turning a profit than serving the people. It seems that pressure from exploitative and extractive industries have all but dismantled the true objective of the agency to “Care for the Land and Serve People.”

A protester known as Fern, the latest person to erect an aerial blockade in Jefferson National Forest, said it best in a Facebook post to the public:

“State agencies entrusted with public lands are in clear collusion with extractive enterprise, and this should be a rational expectation as long as there is the potential for cash flow between corporations with an interest in exploiting or abusing public lands and those who mediate or regulate access to them. EQT (by proxy) may be seen as “reimbursing” the Forest Service for costs incurred in the process of pipeline construction, but how is this different than a financial interest greasing the palm of any government agent to use its power to smooth the path to money making?” 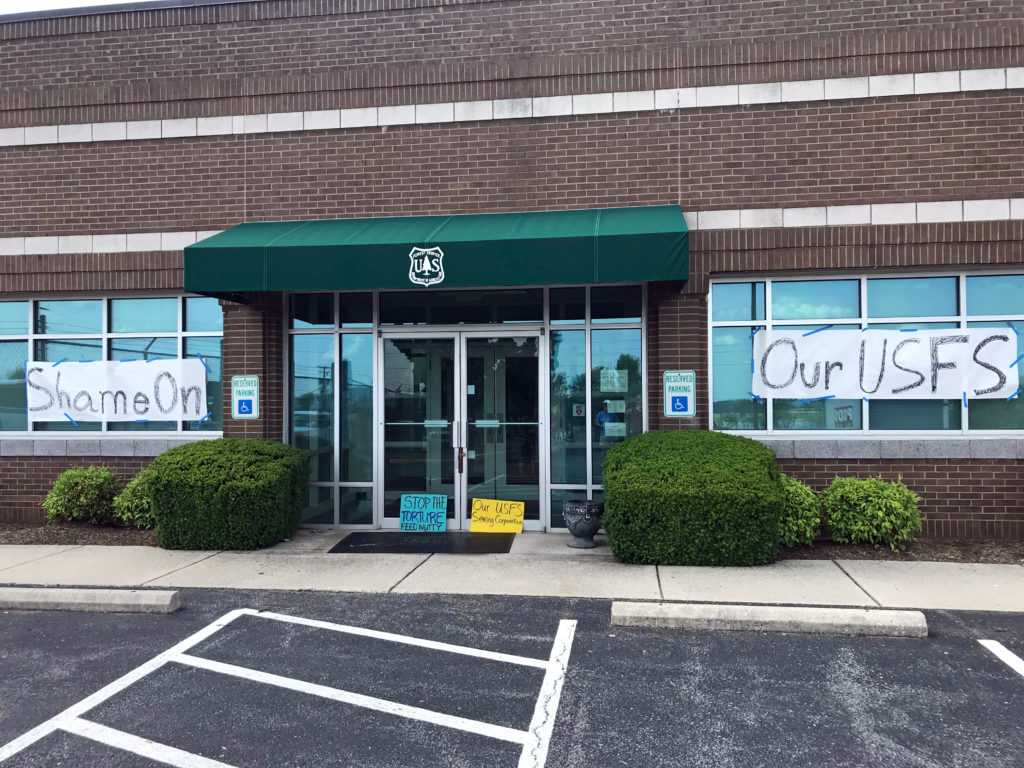 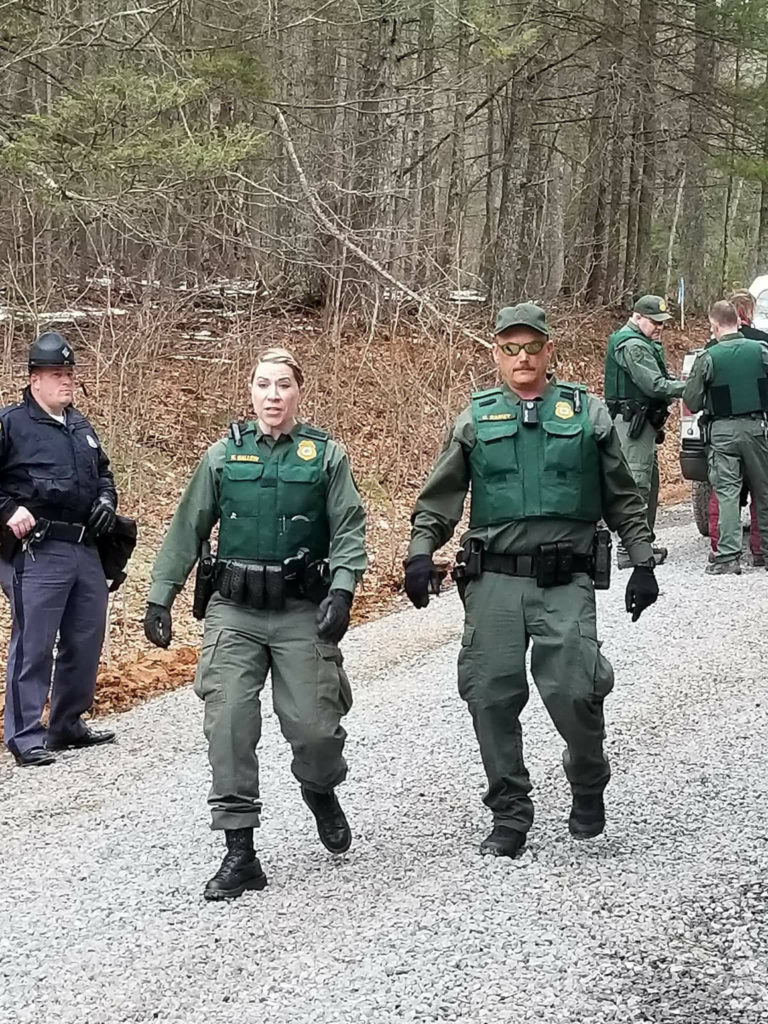 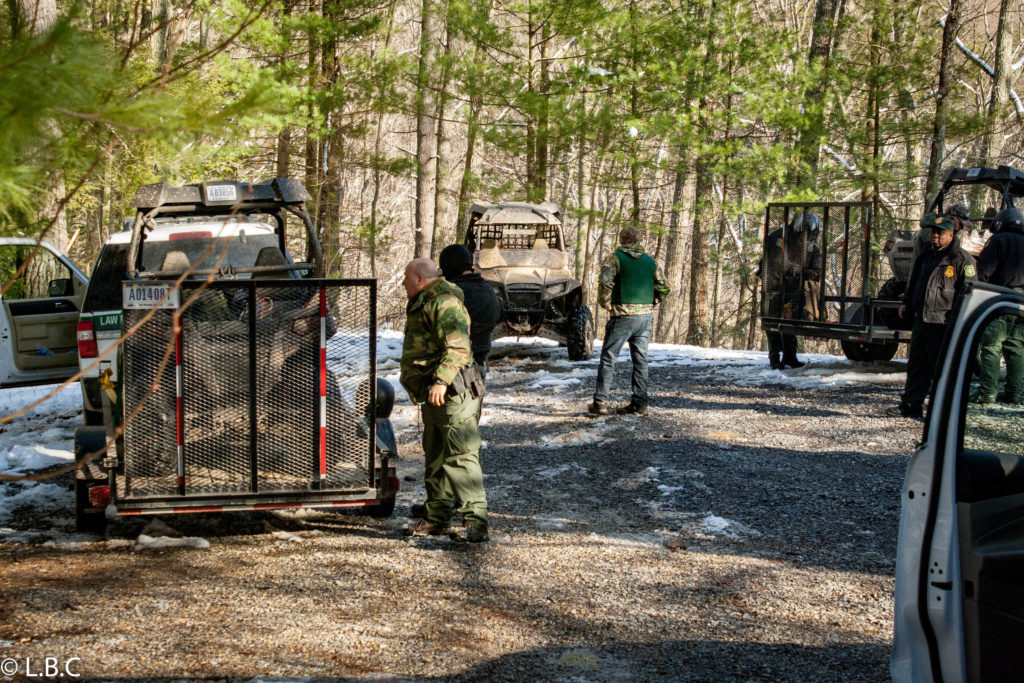 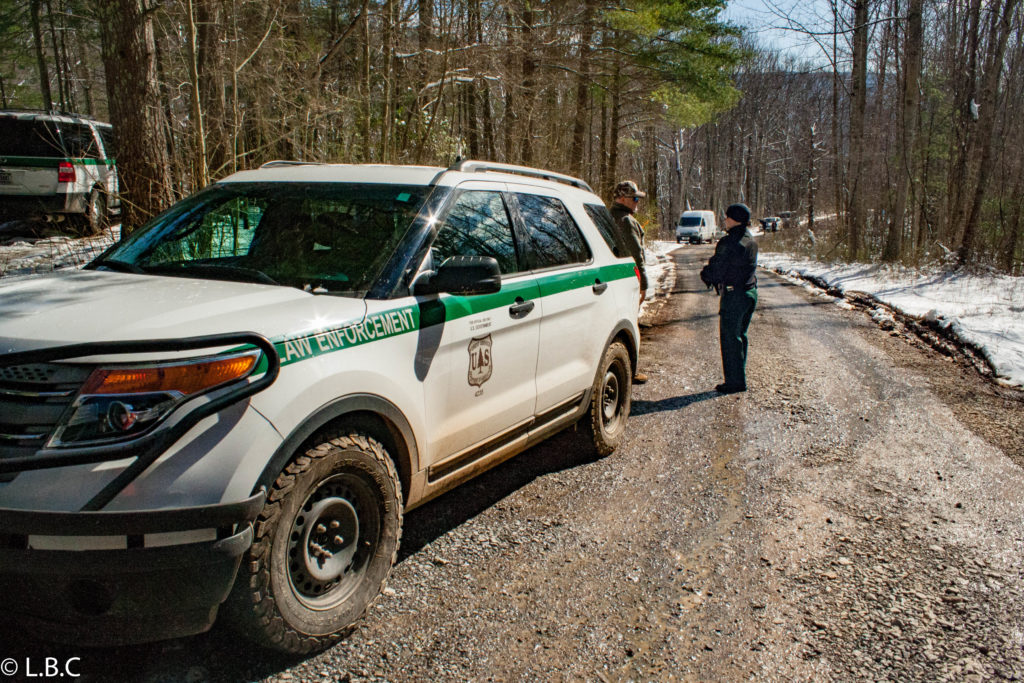 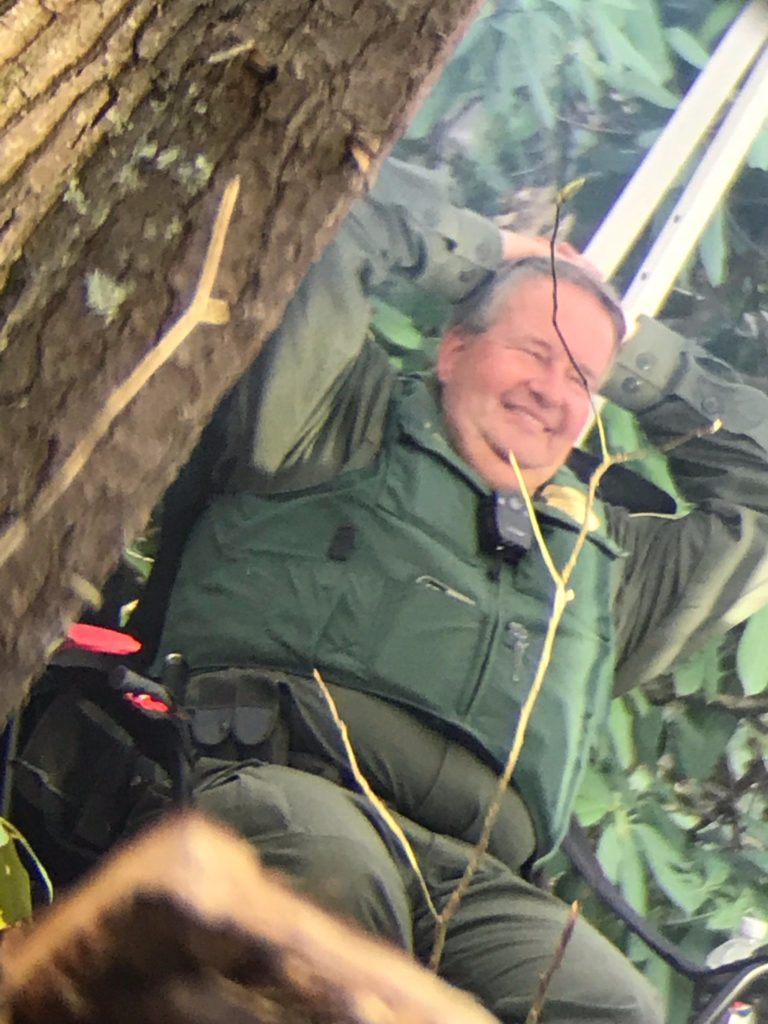 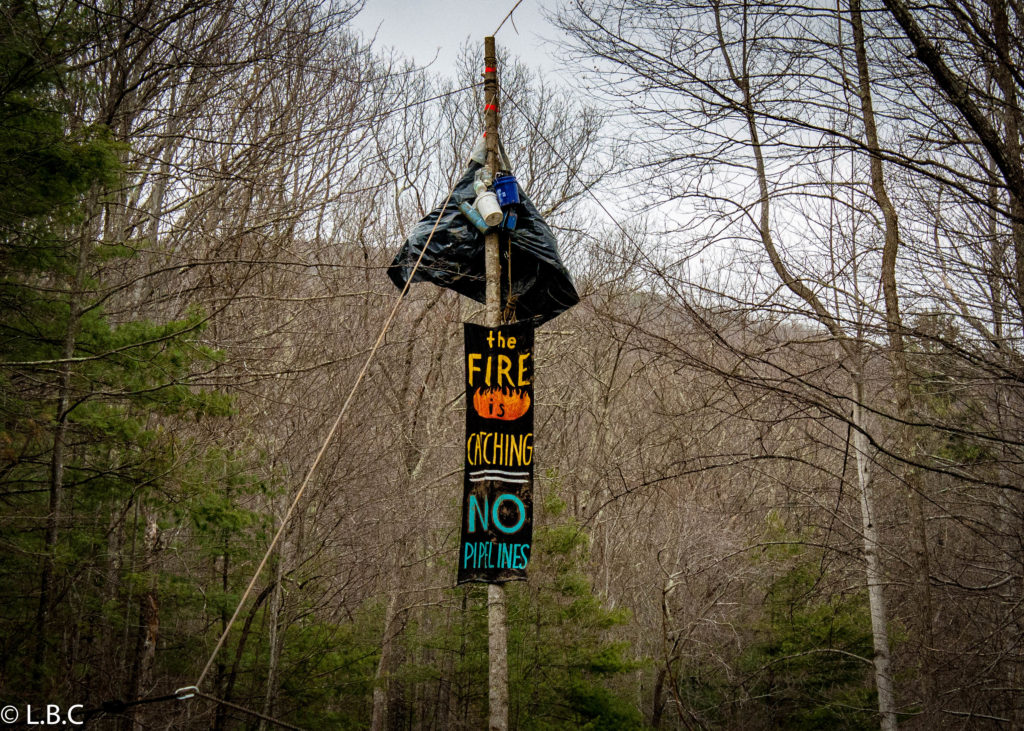