Fly FishingThe Brookies Are Back

The Brookies Are Back

Thanks to scientists and anglers, brook trout are returning to native streams.

When Cormac McCarthy wrote these words in 2006, he offered a beautiful, powerful image of the brook trout among a bleak apocalyptic novel. This image of the brook trout from a clear mountain stream made you forget everything that happened in the rest of the harrowing story, and put you on a mossy, cool bank of a mountain stream, watching a brookie sway from one side to the other.

Though the brook trout doesn’t face marauding bandits like the protagonist of The Road, brook trout face very real dangers today. Most people who live in Appalachia don’t realize that the brook trout is our only native species.

“Once there were brook trout in the streams in the mountains. You could see them standing in the amber current where the white edges of their fins wimpled softly in the flow. They smelled of moss in your hand. Polished and muscular and torsional. On their backs were vermiculate patterns that were maps of the world in its becoming. Maps and mazes. Of a thing which could not be put back. Not be made right again. In the deep glens where they lived all things were older than man and they hummed of mystery. ”

Brook trout, or Salvelinus fontinalis, are more closely related to Arctic char in Canada and Alaska than other trout species. Holdovers from the last Ice Age, brook trout reside in clean mountain lakes, streams, and rivers from Northeast Canada to North Georgia and over to areas in the upper Midwest. They are the only trout native to the Eastern United States, and they struggle to compete with non-native rainbow and brown trout.

While you would be hard-pressed to find an angler who would want to eradicate non-native species from every stream and river, fly fishers and scientists across the Blue Ridge are stepping up to protect brook trout in many of their native streams.

Brookies vs. Rainbows and Browns

“The most immediate and pervasive threats to brook trout are habitat loss and nonnative species—brown trout and rainbow trout, in particular,” says Shannon White, a fisheries biologist at Penn State.

How did non-native brown and rainbow species end up in the mountains in the first place? During the early 20th century, logging and other resource extraction industries took a heavy toll on the water quality of mountain waterways across Appalachia. When those industries began to subside and tourism in the mountains began to rise, well-intending sportsmen introduced hardy species of European brown trout and rainbow trout from the West Coast.

These species did very well in a lot of places, especially in lower elevation streams and rivers where brook trout are not suited to live. They continue to flourish throughout the Smokies. Rainbows and browns have not been stocked in over 70 years in the park, but they still thrive and provide exceptional sporting opportunities.

However, rainbows and browns have encroached on the habitat of the brook trout. Brook trout struggle to survive in the Smokies and the rest of the Blue Ridge, usually hanging on in headwaters and higher-elevation streams.

To fulfill their mission of protecting native fauna and flora, the National Park Service decided to remove rainbows and browns where possible in Great Smoky Mountains National Park to ensure populations of Southern Appalachian brookies could be reintroduced in 2007. To accomplish this, biologists essentially poisoned the water for browns and rainbows with a pesticide on the Lynn Camp Prong of the Little River. Though the biologists tested the pesticide and insisted to the public that there was minimal damage to the other species in the streams, the practice was nonetheless very controversial.

Rainbow trout and brown trout continue to be artificially reared and stocked in streams across the region. Trout stocking programs are a top priority of the state. Tourism hotspots like Gatlinburg, Tenn., and Cherokee, N.C., attract folks from all over the country to catch trout. These stocked, non-native trout excel at reproducing in Appalachian streams and rivers, and can quite easily get right back into brook trout habitat. On the Lynn Camp Prong and other sites, anglers still occasionally catch rainbows above the natural barriers. 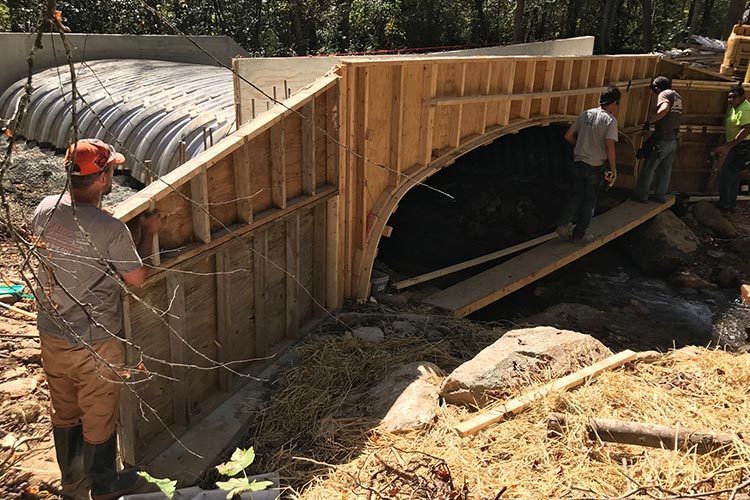 Climate change is another major challenge facing brook trout, says White. Trout streams that historically stayed cold all year long are warming up, and the fish cannot tolerate warmer water temperatures during the summer. As summers become hotter, the habitat and possible sites of restoration begin to shrink.

White also reminds us that habitat loss through logging and resource extraction is still a very real threat to brook trout. Logging leads to increased sedimentation and more exposed streams with higher temperatures.

One leading national group, Trout Unlimited, is focusing on habitat protection and restoration, with a pioneering project working to restore brook trout habitat in the headwaters of the Potomac, the Upper Gunpowder Watershed of Maryland, and Wilson Creek in North Carolina

The first task is to take down small dams, culverts, and other obstructions that prevent brookies from traveling up and downstream. They’ve also developed a Brook Trout Portfolio Analysis, a GIS tool that shows areas where brook trout have the best chance to survive in the coming decades as conservationists cope with climate change. The map takes into account water pH, public land access, elevation, spring sources, proximity to logging and development.

“It’s common sense conservation,” says Trout Unlimited’s Appalachian coordinator Andy Brown. Everyone wants clean water, and no one can deny the impact of fishing on North Carolina’s economy. Last year it was around $380 million.”

Brook trout face other challenges regionally. In Pennsylvania and West Virginia where coal was king, abandoned mines have acidified headwater streams. Across coal country, brook trout no longer inhabit 40 percent of the range that they once enjoyed.  Brook trout restoration organizations like Trout Unlimited and Eastern Brook Trout Joint Venture have added limestone over time to balance the harsh acidity, and have seen success that lays the foundation for brook trout restoration in the coming years. 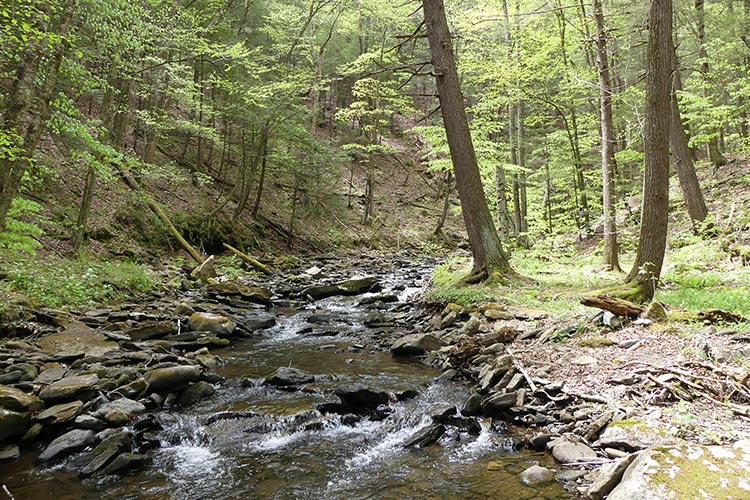 How + Where To Fish For Brookies

Though we should guard brook trout for the treasure that they are, don’t be shy about spending a day chasing these incredibly beautiful and aggressive fish. For many, it’s some of the most rewarding and fun fishing to be had. You’re often in places where you’re the only angler, and brook trout attack the fly ferociously.

To get started, strike out with 7’ to 8’6” 3 or 4 weight rod with a floating line and a box of big brushy dry flies, like stimulators and yellow sallies in a size 12-16. Fish every pool and riffle in the stream, and try to cover a lot of ground while being stealthy. Don’t be afraid to crawl over boulders and get into skinny water, as the less-pressured fish are always the easiest to catch.

You can fish for brookies in different places throughout the year, but the best dry fly season is between May and October. Just try to lay off the fishing if water temps climb to 70 degrees or more.

While you can find your own hidden stream in the mountains above 3,000 feet, here’s a few places to start in your state:

Find a spot to park along Skyline Drive, or go to the headwaters of the Rapidan River for some truly impressive brookies.

Hailed as one of the best fishing destinations in the East, Seneca Creek is known for wild fish that are very spooky and challenging to catch.

Hike along Deep Creek Trail and go beyond the major bridge where tubers put in. Also cast a fly into the mouths of smaller feeder streams, especially the ones that are hard to get to.

Head to the parking lot, rig up, and cross the bridge over the cascades to get into some wild brookies. It’s very steep, so be prepared to spend a lot of time negotiating boulders and steep terrain.

The lower part of Noontootla Creek is private water, but head upstream on Forest Service Road 58 to fish the headwaters. The creek can be quite wide in some places, and trophy brookies reside in the deeper pools.