Charlie Engle was a 30-year-old alcoholic. One day, he decided to go for a run. Soon, he found himself running marathons, then ultramarathons, and by age 40, he was one of the country’s premier long-distance runners. Two years ago, he led a team of three elite runners on an epic, record-setting 4,500 mile run across the Sahara Desert.

Eddie Freas was a strung-out drug addict. To escape his drug fixation, he began training for a triathlon. Last year, he completed his first Ironman and was highlighted on CNN for his incredible comeback.

Exercise can help people make astonishing transformations in their lives. It strengthens our bodies, lifts our spirits, opens our minds, and deepens our hearts. It has been scientifically proven to alleviate depression and improve our long-term mental and physical health, adding years to our lives and enhancing the quality of those years.

But is it possible to exercise too much? Can it become an unhealthy obsession, or even a physical addiction like drugs or alcohol? Certainly the physiological changes in the brain suggest that exercise can be addictive. The endorphin release that accompanies sustained exercise can become addictive, as numerous studies have shown. While it may not seem as harmful an addiction as drugs or alcohol, it can have equally disastrous consequences if taken too far.

Injuries become increasingly common for exercise addicts. Serious heart complications can arise. And eating disorders abound among athletes and compulsive exercisers. What begins as a desire to shed a few extra pounds can become an obsession with losing weight. Sometimes it’s to look thinner; for others, it’s to run faster or feel better about themselves. Regardless of the motivation, a seemingly healthy activity can deteriorate into a pathological fixation.

The same roller coaster of emotions that often accompanies substance abuse can accompany exercise abuse, too–exercise addicts often experience wild emotional fluctuations when sidelined by injury or after a disappointing performance. Bipolar disorders are increasingly common among athletes. Families can often suffer when exercise addicts pursue their athletic goals at the expense of everything else. And the temptation to improve performance with performance-enhancing drugs and supplements becomes alluring for the exercise-obsessed.

So it’s not surprising that many former addicts find success in athletics. Exercise certainly provides a healthier fixation than drugs or alcohol. Rather than reaching for the bottle of pills or liquor, they are reaching for the best inside themselves.

But overdosing is possible even in the pursuit of health. By overly fixating on exercise, addicts can end up crossing life’ finish line faster than they imagined. 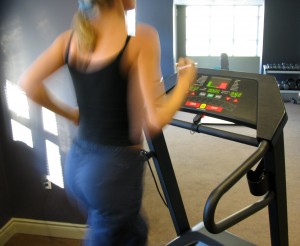