Go OutsideBackpacking and Playing the Game

Backpacking and Playing the Game

With the fall weather outside and all the colors it brings there is no better time to pack your gear, lace up those hiking boots, and discover why backpacking in the Blue Ridge Mountains is heaven on earth. To remind you of the joys of backpacking, here is a repost from the summer detailing why backpacking is good for the soul, body, and mind:

One of the most rewarding activities out on the trail is one of the most basic, and perhaps to those who have yet to experience it, the most misunderstood. Backpacking – the art of walking while carrying a bunch of stuff. It seems simple enough, but not until you put on a 50 lb. pack and start ascending steeper then staircase hills, does one realize the difficulty in carrying one’s living supplies.

When backpacking, the basic gear weighing you down includes shelter, food, water, and perhaps a clean pair of underwear. All the basic amenities taken for granted in our modern running water and electricity driven world. Add into the pack a stove, flashlight, sleeping bag, and a notebook and suddenly the difference between necessities and obscenities becomes clear.

So where does the fun come in, the reward, and the reason for people of this fast-paced world to still seek this primitive method of traveling? Perhaps it is the escape from the said fast-paced world, for it is impossible to carry a cell phone or computer in the wild including with it all the weighty connections it holds. Perhaps it is the journey between A and B that people seek. The adventure that happens between the destinations. For me however, it is all about not losing the Game.

The Game, as introduced to me by some of my younger campers, is a simple practice. The goal of the Game is to not think about the Game. As soon as your mind flickers light on the game that you’re trying to forget you’re playing, you must announce annoyingly to the group “I just lost the Game.” In response, typically anyone privy to the game will then also shrug in frustration and make a similar announcement due to their remembrance and recognition of the same Game. Simple, of course. Childish, maybe. But perhaps a deeper understanding of the world we live in can come out of these simple rules. 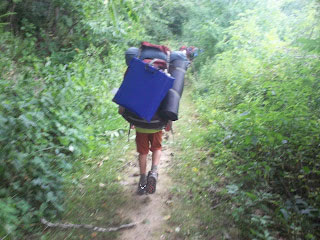 The Game, in backpacking terms, is to simply not think about the fact that you’re backpacking. To not think of how heavy your backpack is, of how early you’ve woken that morning, or of how much farther is left to go on the map. If you think of these things as your trekking along, you have lost the game. The key instead is to let your mind wander to wherever your thoughts may take you. Personally I like to think of where I’ve been and where I’m going with my life, new thoughts and bright ideas, lost loves and missed opportunities, and friends new and old. Some may call it meditation, others say it’s zoning out (or in), but I would say it’s all about not losing the Game of backpacking. For a watched pot never boils, and a hiker whose is never lost fails to find anything new. 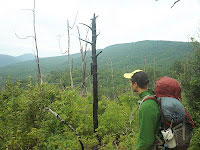 The question now stands, how does the Game apply to everyday life outside of backpacking? For it is this author’s belief that every lesson learned within every recreational pursuit can be applied to everyday life. So perhaps in the pursuit of love, wealth, and happiness the key may be letting your instincts and ambitions do the work, let your feet keep moving without acknowledging the everyday weight that can sometimes pull us down. To keep your mind away from the struggle and trust yourself, trust that as long as you don’t think about the game all too much, that you’ll surely win.

For more adventures during the summer, check out the original blog at www.adventurethirsty.blogspot.com