I don’t care if it’s officially Spring—I’m not going paddling yet. I’ve got big plans for sessioning the French Broad outside of Asheville on a regular basis this Spring and Summer, but I’m gonna need the mercury to rise to at least 85 before I set the paddleboard in the water. I saw a friend on Facebook take a dip in the pool yesterday. She was fully clothed. It was 50 degrees. It’s kind of a thing—a ceremony to kiss winter goodbye and welcome the warmer weather. I like it.

Here’s another Spring tradition I like—the release of light, easy drinking beers. All over the country, breweries are shedding their porters and stouts and malty ambers and showing off their lighter pales, pilsners and lagers. Sweetwater Brewing, out of Atlanta, has just released their latest Catch and Release Seasonal, the Road Trip Ale.

Don’t let the name fool you—this is a German pilsner through and through. Road Trip has a strong lager profile, with a malty backbone and a clean, crisp mouthfeel. But Sweetwater brews it at a higher temperature like an ale, and adds a healthy dose of hops like an ale, so there’s a dry, slightly hoppy bitterness to the finish, and more floral, lemony notes than you’d expect from a pilsner. Let it warm a little in the glass, and it gets even more complex.

There’s a trend of imperial lagers going around in the craft beer world, and this almost fits the bill. It’s a bit too subtle to fit into the imperial category, and the ABV hangs relatively low at 5.2 percent. You don’t really want an imperial lager anyway right now. You want what’s in the Road Trip bottle—a craft brewery’s take on the drinkable pilsner, perfect for those first forays into Spring.

And if that’s not enough, Sweetwater is also releasing their uber popular 420 in a can. Is there anything better than a paddle down the river followed by a sixer of 420 cans? No, there isn’t. 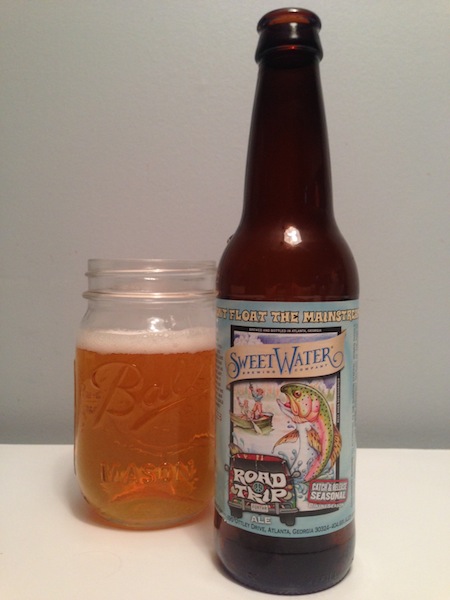