Go OutsideBen and Jerry's Does Bonnaroo

Ben and Jerry’s Does Bonnaroo

For years ice cream aces Ben and Jerry’s have been assigning interesting new flavors to musical icons, including Jerry Garcia (“Cherry Garcia”), Dave Matthews Band (“One Sweet Whirled”), and Phish (“Phish Food”). But this summer the Vermont-bread creamers will create a new concoction for an entire festival. “Bonnaroo Buzz” will be released this summer to celebrate the Bonnaroo Music and Arts Festival in Manchester, Tennessee. To match some of the Southern environs and fest location in Coffee County, the new flavor will include light coffee and malt ice creams with whiskey caramel swirls and English toffee pieces. If you won’t be at the festival, which runs from June 10-13, you can try the new flavor at Ben and Jerry’s scoop shops starting on May 4. Look for a Bonnaroo preview in BRO’s upcoming Festival Guide in the May issue. 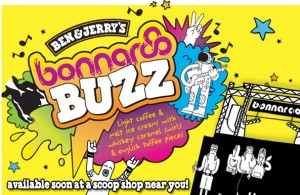