I spent a few days in Las Vegas recently and I learned a couple of things. First, I’m too old for Las Vegas. Gambling and drinking Redbull and vodka until 6am each morning doesn’t sit well with my constitution. I also learned that the road cycling in Vegas is stellar. Not just the desert scenery, but the in-town infrastructure. I rented a bike at a shop in the suburbs, then rode a greenway that paralleled the interstate for a solid 10 miles before hitting a four-lane highway that had the widest bike lane I’ve ever experienced. Then we got on the scenic loop through a national conservation area that had one-way traffic and massive shoulders for cyclists. I’ve never felt safer on a bicycle, and it made me wonder why the hell my own town, which actually has a reputation for adventure and some of the greatest road cycling routes in the world, is so far behind in terms of bike infrastructure. In some ways, it’s not fair to compare one city’s bike infrastructure to another’s—there are so many extenuating circumstances that surround a mile of greenway or bike lane–but damn. Can a brother get a greenway that actually goes somewhere? Or a bike lane on a busy road? I’d even settle for an ample shoulder.

Sadly, the South in general is not known for its bicycle friendliness. I’d move, but the food here is too good. And so is the beer. The fried chicken in Vegas sucks. And the town has a serious lack of craft breweries. Bike lanes are great, but if they don’t connect a local IPA with a bowl of collard greens on the other side of town, what’s the point? 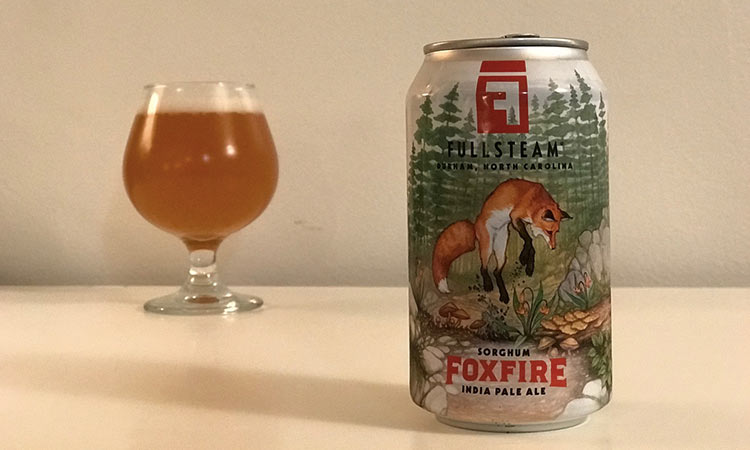 And there’s no brewery that combines the South’s food and beer better than Fullsteam, out of Durham, North Carolina. The brewery has a mission to brew uniquely “southern beer” using as many local ingredients as they can get their hands on. You can get on their website and see the exact percentage of a beer that was grown locally. They have a sweet potato lager, a southern basil farmhouse ale, and this new IPA that uses locally grown sorghum.

If you’re not familiar with sorghum, it’s a grain, like a cereal. A lot of the world eats it, but in America, we mostly use it as livestock feed. Except for in the South, where we also use it as a sweetener, because, you know, the South.

Fullsteam’s Foxfire is unfiltered and aromatic as hell. It pours opaque and smells really tropical. It took me a while to pinpoint the exact fruit I was smelling, but eventually, it hit me: apricots. That same fruit is on the sip too, which is sweet but with a thin mouthfeel, so it doesn’t come off as saccharine. There’s an edge to it.

It’s a hell of a spring IPA, and it proves yet again that Fullsteam is killing it. Every time I get ahold of something from Fullsteam I’m impressed. They manage to be different without being weird, and they’re nailing this whole “southern beer” thing without being over the top (they’re not putting fried chicken or collard greens in the kettle). Bravo Fullsteam. Now, if only I could safely ride my bike there from my house…