According to the survey, 83% of respondents agree they come up with their best inspiration and ideas while running. The survey also found three-quarters of respondents said they’d be more attracted to someone if they found out he or she was a runner. Half of all surveyed have used running as their pick-up line.

“Our mission at Brooks is to inspire everyone to run and be active, and I can’t find much better inspiration than the results of this survey,” said Brooks Senior Director of Global Brand Heather Snavely. “Who doesn’t want to feel healthier, smarter and sexier? And all you need to do is put on a pair of running shoes and log some miles?”

Race to the Bedroom

· The couple that runs together stays together. An overwhelming majority (71%) of guys and gals believe running together as a couple plays a part in their sex life, for better or for worse. More men (75%) than women (68%) said that logging miles together as a couple increased their mileage between the sheets.

· Ladies more so than their male counterparts (63% vs. 37%) admit to being more confident while pounding the pavement.

· City dwellers reported more run-fueled thoughts than rural residents (88% vs. 79%). The fresh air is also key with more respondents reporting their ideas came to them in the great outdoors (85%) vs. inside (76%).

· More than half of respondents (56%) run to clear out the cobwebs and hit refresh.

· Rain or shine, getting out of the house ranks high as a motivator for 45% of female respondents, compared to 37% of males.

· A majority (78%) of respondents consider technology a running staple. That number rockets to 92% among the younger generation (18-24 year olds).

· Smartphones lead the pack as the must-have piece of running technology for 41%, with iPod (36%) and stopwatch (19%) closely following.

· Asked to pick a top tune to play on repeat for all 26.2 miles of their marathon, 59% chose the classic “Don’t Stop Believin’” by Journey.

· Almost three-quarters (73%) of respondents agree that attractive running gear motivates them to get up and out the door.

· Frequent racers are more motivated by attractive running apparel than those who compete infrequently (88% vs. 58%).

· Early risers lead the bunch with 42% preferring to run before the sun rises. Scattered Sprinters – those who run whenever they have the time – follow with 29%, trailed by Lunchtime Lungers (16%) and Night Owls (12%).

· Open trails and scenic views are calling. Forty two percent have, at least once, picked a vacation for its bevvy of running options.

· Partnering up is preferable, with 59% saying a jog with a buddy makes it easier to stay on track. 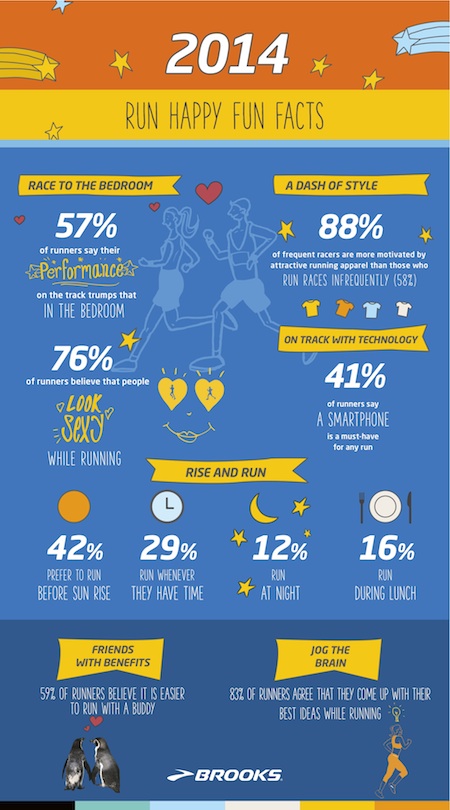