Nutty Hangs Tough: Tree-sitter blocking pipeline for 56 days is being starved by the Forest Service

Nutty, the tree sitter who has held back the Mountain Valley Pipeline bulldozers in Virginia’s Jefferson National Forest for 56 days and counting, has been blockaded by the Forest Service for weeks, denying her food and water.

Nutty persists in her conical gray tent which is suspended fifty feet above the ground, on a small wooden platform, called a ‘monopod.’ Buckets hang off its sides by rope, along with signs decrying the injustices of the Mountain Valley Pipeline.

The Forest Service has established a no-go zone more than one hundred feet around her and have arrested anyone who tried to cross. Just beyond the police tape, supporters gather in a collection of tents and tarpaulin shelters.

Set to transport fracked gas more than 300 miles through West Virginia and Virginia, the proposed Mountain Valley Pipeline has met opponents on ideological, environmental and economic grounds since its conception.

One of those opponents, a tree sitter named Theresa ‘Minor’ Terry, was on her way to see Nutty on Saturday May 19, along with about a dozen supporters and guides.

Minor Terry, and her mother Theresa ‘Red’ Terry, staged their own tree-sits for more than a month in Bent Mountain, from April 2 to May 5. The MVP, exercising the power of imminent domain, seized part of Terry’s property, which had been in their family for seven generations. They took to the trees in protest. On May 4, U.S. District Court Judge Elizabeth Dillon found Minor and Red Terry in contempt of court, and would be fined $1000 per day, had they continued with their tree sit.

“If our court fines weren’t going to MVP, then I would’ve stayed longer,” Terry said. “Every landowner in the path of the pipeline followed the appropriate steps. What else are you supposed to do when you play by the rules and you’re still not winning?”

Making the trek to see Nutty is only one facet of Terry’s recent efforts, which in addition to community outreach to gain visibility and traction to oppose the pipeline, also includes making a call, and mailing a bologna sandwich, to Gov. Ralph Northam every day. The bologna in wry protest to her treatment during her own tree sit―wherein Virginia State law enforcement brought Terry a bologna sandwich for every meal.

“It feels like an infringement on my freedoms,” said a Possum, a native of Roanoke who just completed her master’s degree at Radford University. “This is a national forest, and I can’t use a public road?”

Possum, along with a young man named Niall who grew up in Bent Mountain and had spent time at the Terrys’ tree sits, had bushwhacked around the closed road to reach the protest camp near Nutty.

“Crushing underprivileged and marginalized people underfoot—making as much as you can while putting people underneath you,” Niall said. “That’s capitalism, right? This is just another part of that fight.”

To reach the protest camp requires a long bushwhack through Jefferson National Forest. Forest Service trucks and personnel surround Nutty’s monopod. Near the protest camp, a multi-colored sign states, “We’re still here,” and leaves instruction to follow the pink tags to a small encampment. For the past two months, this is the only way supplies have reached the protest camp that supports Nutty. 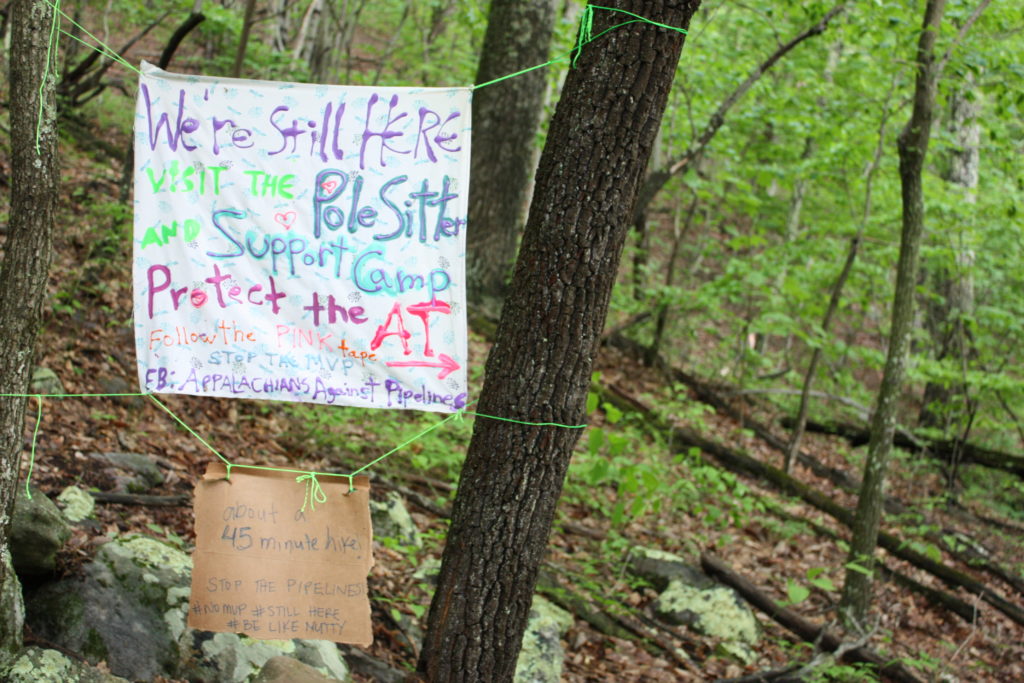 The near-ceaseless rains of the past week have left the path to the protest camp loamy and unstable. The air is suffocating with the twin pressures of humidity and mosquito-buzz. The camp itself consists of  a cluster of gray and blue tarps pulled tight to cover fire pits, hammocks, wood storage and single and double tents, all dominated by a canopy tent in the center.

Three of Nutty’s supporters sit. One of them is Jammie Hale, mustachioed and wearing a U.S. Army ball cap. He’s a Giles county resident, a retired state employee and a farmer. Hale said he’s made the trip up the mountain more than forty times, bringing with him food he’s grown to keep the camp supplied.

“I stand to lose my home. My well—that’s karst fed. I can’t farm, I can’t make a living if I don’t have water.” The route of the proposed pipeline comes between Hale’s property and his water source―potentially crippling his ability to farm and make a living, should it be impacted. “I’m defending my home. I’m defending my land.”

This sentiment is echoed by most opponents of the MVP―that even at this stage before the pipeline is laid―the early work to carve out mountainside space for the 42-inch-diameter pipe could wash sediment into creeks and contaminate water sources. Opponents, citing insufficient erosion controls, look to instances like the mudslide in Franklin County in the latter half of last week, which issued from an MVP clearing site, blocking a road with six to eight inches of mud.

“When it rains, and the mountains start fighting back, it causes mudslides,” Hale said.

Nutty’s supporters shout to her that she has visitors―a feat across the distance. The group that came with Terry gathers by the police tape which bounds the camp. A brown paper bag sign is posted there, stating “Still Here!”

Below, half a dozen khaki-shirted Forest Service agents, in their encampment on the road, take pictures of everyone’s faces, being uncomfortably thorough. The group shifts their feet. Nutty’s supporters share wearied glances, grumbling that it’s part of the typical rigmarole.

The gray tent, hovering in the air through the copse of trees, shakes and trembles. One of Nutty’s supporters whispers that she’s getting ready. In a moment, Nutty reveals herself, poking her head and shoulders free from the flaps of her tent―she wears a black balaclava and a green long sleeve shirt. Terry shouts that she’s a fellow tree sitter from Bent Mountain.

“I really hope that the pipeline can’t make it through here, or there!” Nutty shouts back.

There are strained silences, as each side wonders if they made themselves heard.

“I’m trying to think of some news, but all I can think of to say is, it’s not raining,” one of Nutty’s supporters yells.

“There’s so many butterflies out today!” Nutty shouts.

Below, a frenzy of khaki-energy builds as more Forest Service officers arrive. Previously, they have turned on generators to drown out Nutty’s words.

“It’s hard. We can’t have honest and real conversations,” one of Nutty’s supporters said.

According to Terry, this was one of the most painful aspects of her tree sit―the simultaneous isolation from human contact, while never truly being alone. If she reached for her bucket to pee during her five week sit, three to seven state employees camped out below her would know about it.

“I’m a pretty introverted person. But not being able to reach out and touch someone was hard,” Terry said. “When it’s raining it’s the hardest. It’s isolating.”

Nutty suffers that same abuse and more according to her supporters, as Nutty is spotlighted nightly, starved of food and water, and often the smoke from the Forest Service’s campfires washes up under her tent. 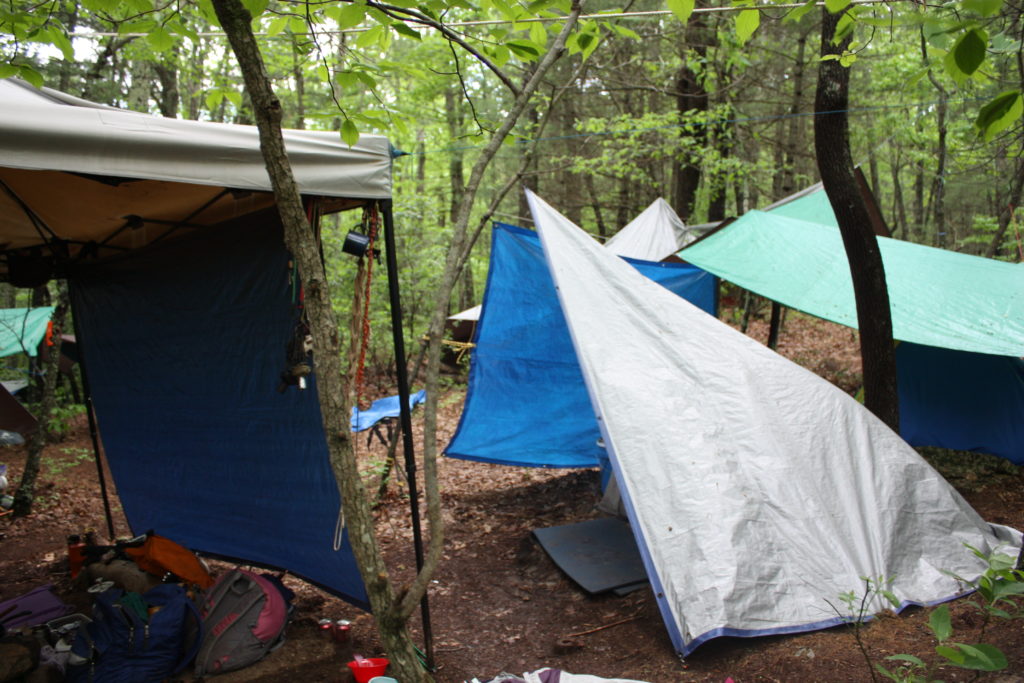 “Nutty is our Forest Angel,” Hale said. “I find it disturbing that our government won’t open its eyes to what will happen if she comes down.”

Monique Sforza, a Roanoke resident who hiked up with Terry, echoed similar concerns.

“I have two little grandbabies, and I just want them to have clean water,” Sforza said. “Looking at other states, at the devastations, the leaks, why would we let that come into Virginia? It’s just so sad. We all need clean water.”

As the rain returned and the group turned to leave, Jon Sokolow, a lawyer, writer, and activist from Fairfax, said he opposed on the pipeline on both environmental and economic grounds.

“This area particularly depends on agriculture and tourism for its natural beauty—both of which will suffer if this pipeline is built,” Sokolow said.

On Monday, a large crowd rallied outside the U.S. Forest Service office in Roanoke chanting “Open the Road!” and  “Feed Nutty Now!”

“Governor Northam could order the Virginia State Police to feed her, today. Why doesn’t he? He could feed someone whose being starved peaceably protesting.” 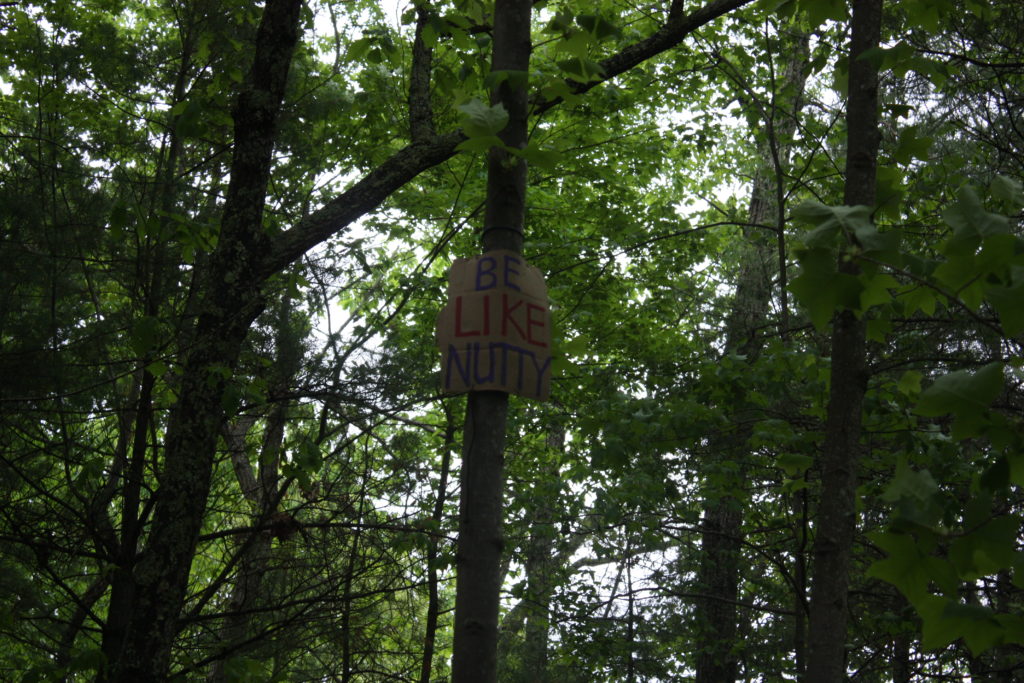