The Wild and Wonderful Whites of West Virginia made its debut over the weekend at the Tribeca Film Festival in New York City. The documentary has well-known backers, including MTV Studios and executive producers Johnny Knoxville and Jeff Tremaine of the series Jackass. It’s also chock full of Appalachian stereotypes and caricatures—redneck culture, pill-popping, run-ins with the law, rampages, rape, gun fights, and the kind of nudity you really don’t want to see. Unfortunately, they’re all accurate depictions of one notorious family from Boone County, West Virginia.

Tucked deeply in the hills of the Appalachian Mountains, the White family lives an existence more like something out of the Wild West than modern-day rural America. The legendary family is known as much for their disturbing and excessive ways as they are for their famous mountain tap dancing legacy, which includes living legend Jesco White. Jesco White was the central figure in the PBS documentary 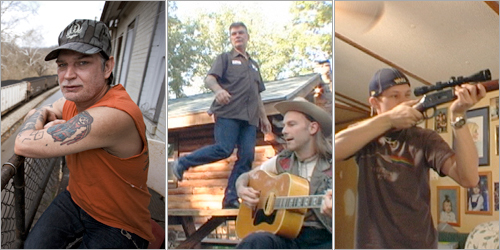 that gained a cult following in the early 1990s. The new documentary is the result of a year spent with Jesco and his extended family.

Will this movie do more harm than good for Appalachia? Julien Nitzberg, director of the documentary, believes the film reveals the complexities and challenges that Appalachian folk face. In his latest blog, Nitzberg writes:

“Everything with them is about extremes — extreme fun or extreme sadness, extreme love or extreme hate. Because they grew up very poor in West Virginia’s coal country, they see the limits society has placed in their way and instead of being depressed, give life (and death) the middle finger and, in the words of Mamie White, love to ‘party their balls off.’

While the documentary focuses primarily on the shenanigans of the fun-loving White family, it also tackles the deeper problems behind their poverty, especially coal mining. Nitzberg contends that mountain top removal is the perfect metaphor for life in rural Appalachia:

“Instead of underground mining, the coal companies … realized it was cheaper to rip the tops off mountains, destroying the environment and local waterways. After this, they plow out the coal from the exposed coal seams and leave the area looking like a crater on the moon with some cheap grass sprinkled on top. The money comes quickly, the mountain leaves faster and then the communities are screwed afterwards left with no work. Party now because the coal will soon be gone and we’ll be left with nothing. That’s the story of too much life there. It’s either crushing up coal to sell or crushing up pills to snort.”