Gabriel Mapel was 11 years old when he observed his first hawk count. A Virginia country boy with a lifelong affinity for all things nature, he and his dad visited Rockfish Gap in Afton in the fall of 2010, parking themselves among a gaggle of volunteers armed with binoculars and guidebooks. He was hooked.

“I spent about 200 hours up there that season,” said Mapel, now a 17-year-old senior in high school with aspirations to become a national park ranger. “I had a great time, and I think it’s a really great thing to do on many levels. It’s a very important citizen science project, and on a more personal level, when you’re up there watching raptors migrate, it’s just really cool.”

It’s raptor migration season here on the East Coast, and across the region volunteers like Mapel dedicate hours upon hours to the task of counting the hawks, falcons, ospreys, eagles and even owls that make their way south for the colder months. Rockfish Gap Hawk Watch, a 40-year-old group of dedicated birders who observe, count and record the thousands of raptors that fly over the parking lot of the Inn at Afton, is one of many official hawk count sites in the country that collects migration data. Organizers then feed those numbers to the Hawk Migration Association of North America (HMANA), a nonprofit that collects and analyzes the data to determine population trends. That information all ends up in a publicly accessible database with migration numbers dating back to the 1950s. 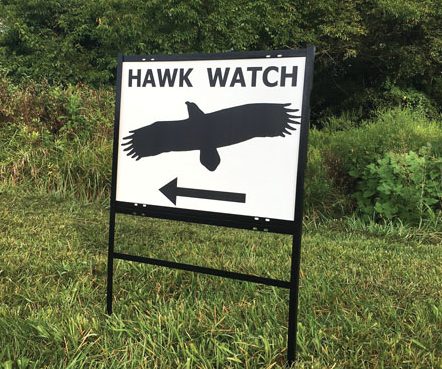 “In North America there are at least 200 spots that have been established where people go, and they don’t just watch the hawks, but they participate as citizen scientists,” said Rockfish Gap Hawk Watch Coordinator Victor Laubach. “They record numbers and species they see migrate over that site every fall.”

Located in the Blue Ridge Mountains between Charlottesville and Waynesboro, Rockfish Gap is an ideal spot to witness the birds’ annual migration, which starts in early September and typically lasts through the first week of December. Migratory birds like waterfowl and raptors tend to have defined pathways they follow, which Laubach said makes the flight more energy efficient. 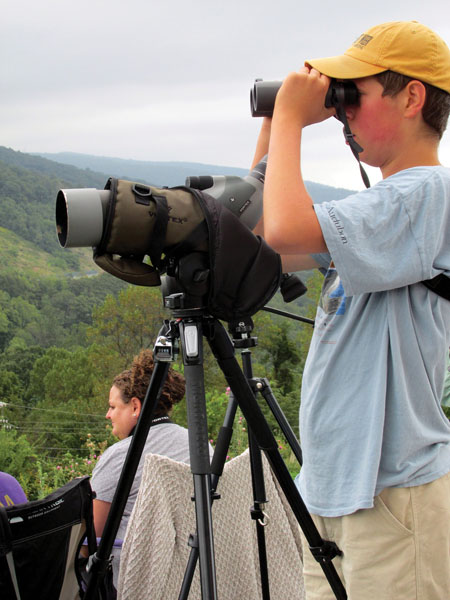 “That’s why hawks in eastern states generally fly down the Appalachian mountains,” he said. They take advantage of the uplift in wind and thermals generated.”

So far this season, volunteers at Rockfish Gap have counted more than 26,000 raptors, which is about 10,000 more than the average.

According to HMANA Monitoring Site Coordinator Julie Brown, sites like Rockfish Gap have played crucial roles in determining current population trends. She said the American kestrel, for example, is on a decline across the country. Golden eagle populations, on the other hand, appear to be decreasing in the west and increasing in the east. And HMANA didn’t draw those conclusions by looking at hawk count numbers alone.

Want to try your hand at hawk counting? Carolina Raptor Center’s Rehabilitation Coordinator Mathias Engelmann, who’s participated in counts himself, recommends just showing up at a site ready to learn. If you’ve got a lawn chair, a decent set of eyes and a pair of binoculars, he said, you can learn the rest. Raptors often soar at altitudes of 1,000 feet high, forcing counters to rely entirely on shape and flight pattern rather than size or details like tail bands or eye stripes.