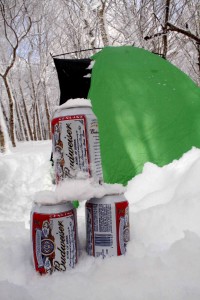 We’ve had unprecedented amounts of early-season powder here in the Southeast. There’s been a constant base of snow in the high elevations near BRO’s NC office for almost a month. Canaan Valley, W.Va. has gotten 114 inches of snow already. Snowshoe Mountain Resort has gotten even more. The constant base on the mountain tops have allowed Southern backcountry skiers to take turns on mountains that only get skied every few years. Check out this video of skiers exploring the steep farmland of the Upper Sinks, W.Va. by snowcat and telemark skis. And keep an eye out for BRO’s February issue, which will include a feature about hunting for deep backcountry powder on West Virginia’s tallest mountains.

Sinks skiing from ScottyB on Vimeo.