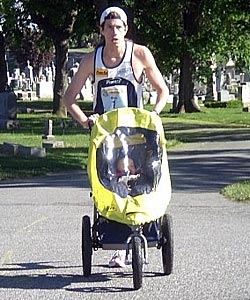 Next weekend, Michael Wardian will try to break his own world record for the fastest marathon time while pushing a baby stroller.

The 35-year-old from Arlington, Va., set the record of 2:42:21 at the Frederick Marathon in 2007 with his first son, Pierce, in tow. On November 22, Wardian and his younger second son, Pierce, will line up at the Route 66 Marathon in Tulsa, Okla., hoping to breaking 2:42. Rumor has it that another elite stroller-pushing runner may try to challenge Wardian’s record as well.

Wardian is no stranger to strange records. He previously set the world record for fastest marathon on a treadmill and fastest 24 hour time on a treadmill. He has also won four USATF national Championships and competed twice in the Olympic Marathon Trials. Yet unlike most elite runners, Wardian holds down a full-time job and helps raise his family. He also trains and races unconventionally, often racing four times a month. Wardian—and his fast-paced life—show no signs of slowing down.