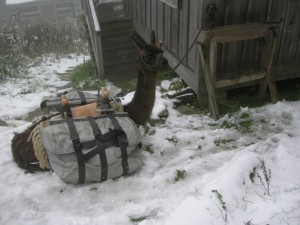 The Southern Appalachians have already seen their first measurable snowfall, and it’s only the first week of October. Earlier this week, Mount LeConte, a 6,000-footer inside the Great Smoky Mountains National Park got 3.5 inches of snow over a two-day span. Shortly after, Snowshoe Mountain Resort in West Virginia reported some light accumulation. For LeConte, it’s the heaviest, first snowfall since the ‘70s. Last ski season, the region saw its first snows in the middle of October and we all know how that ended up for us skiers and boarders. When I think fondly on the epic winter of 2009/2010, I casually refer to it as THE SINGLE BEST SKI SEASON IN THE HISTORY OF SKI SEASONS!

And now, could it be that we’re looking at a repeat of last year? The Farmer’s Almanac is calling for colder temperatures this winter, and I’m personally predicting that this year will be snowier, colder, and more awesome than last winter. In fact, I believe we’re at the beginning of a five-year cycle of epic snowstorms and chilly winter weather. In fact, I see a complete inversion in typical winter weather patterns where the Southern Appalachians become snowier than the Rocky Mountains! I’m not a meteorologist and I have absolutely nothing to base these predictions on, aside from an overdeveloped sense of optimism. And let me tell you, if you’re going to ski in the South, optimism is as essential as ski boots.

Sure, it’s warming back up now and the mercury will see the mid ‘70s in the North Carolina mountains over the next few days, but we’ve already broken the snow seal, so to speak. The flood gates are open. In the immortal words of Sammy Cahn and every other crooner since the ‘40s, “Let it snow, let it snow, let it snow.”