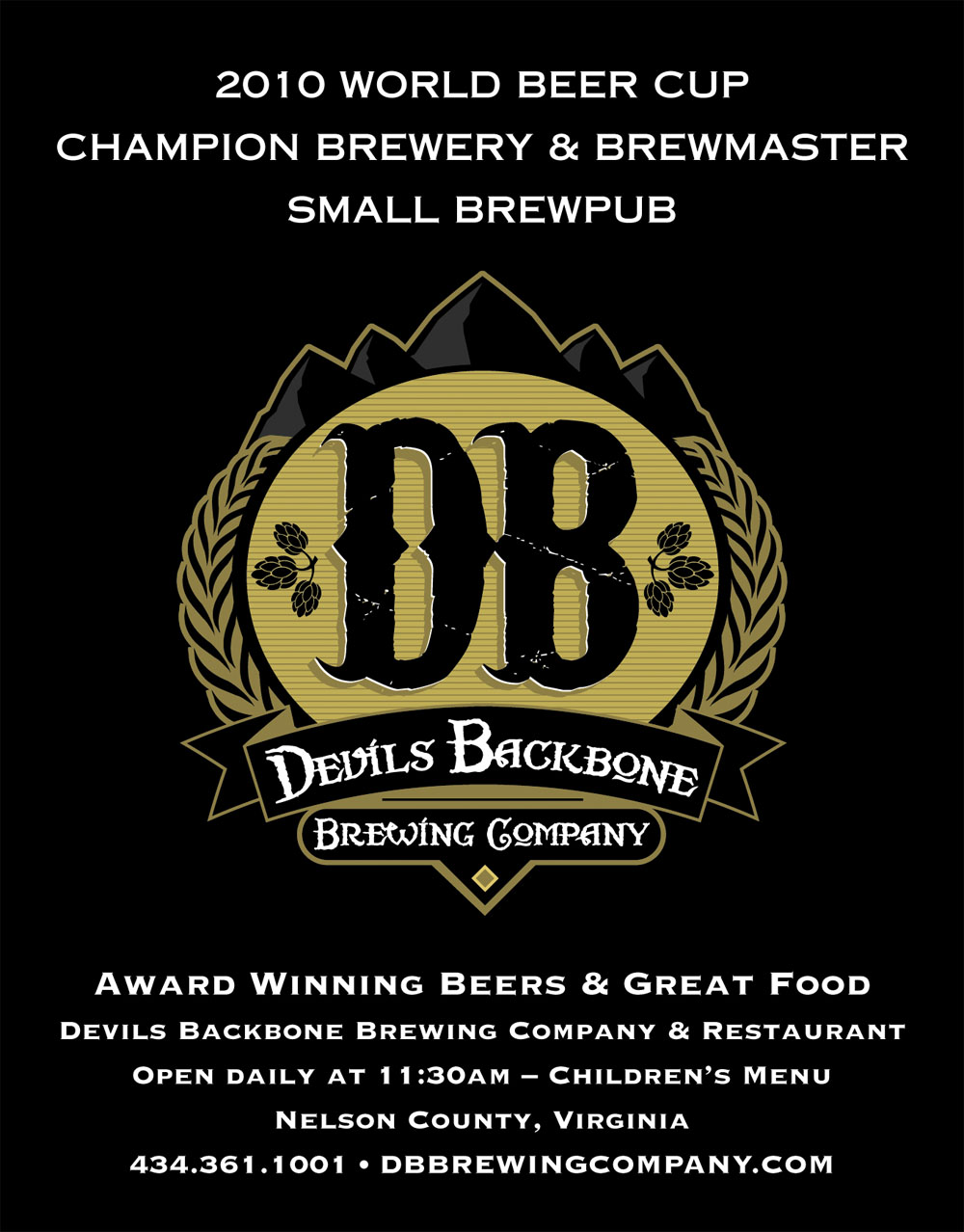 Devils Backbone Brewing Company is a family business that opened its doors to the community in November 2008. With brewmaster Jason Oliver, they have succeeded in producing award-winning American craft beers. The cozy lodge setting is reached with an easy drive, nestled in the Blue Ridge Mountains of Nelson County. Devils Backbone sits surrounded by panoramic mountain views at the base of Wintergreen Mountain. The brewery has nearly a dozen different craft beers on tap at a time with a range of variety from the Eight Point IPA to the Scottish brown Ale of Fergus, recently winning  a 2010 bronze medal, to the light and crisp Gold Leaf Lager, which which has earned two Gold Medals in the  2010 & 2009 Great American Beer Festival. The brewery also took home four medals and the grand prize in the category of Champion Brewery and Brewmaster Small Brewpub at the 2010 World Beer Cup.

The operation puts heavy emphasis on sustainability with its brewpub built out of salvaged materials mostly from Virginia, on premise three seasonal gardens, use of local farmer’s produce whenever possible, recycled cardboard, glass, plastic and cooking oil, fresh well water and 12% percent energy saved with the first ever wind turbine in Nelson County. DBBC’s beers are naturally carbonated too. They also host a regular line-up of the region’s best musicians. While Devils Backbone holds the perfect après ski atmosphere in the winter, the brewery also uses their scenic surroundings to host a variety of outdoor events, including the Brew Ridge Trail Music Festival and Nelson County Bike Festival. 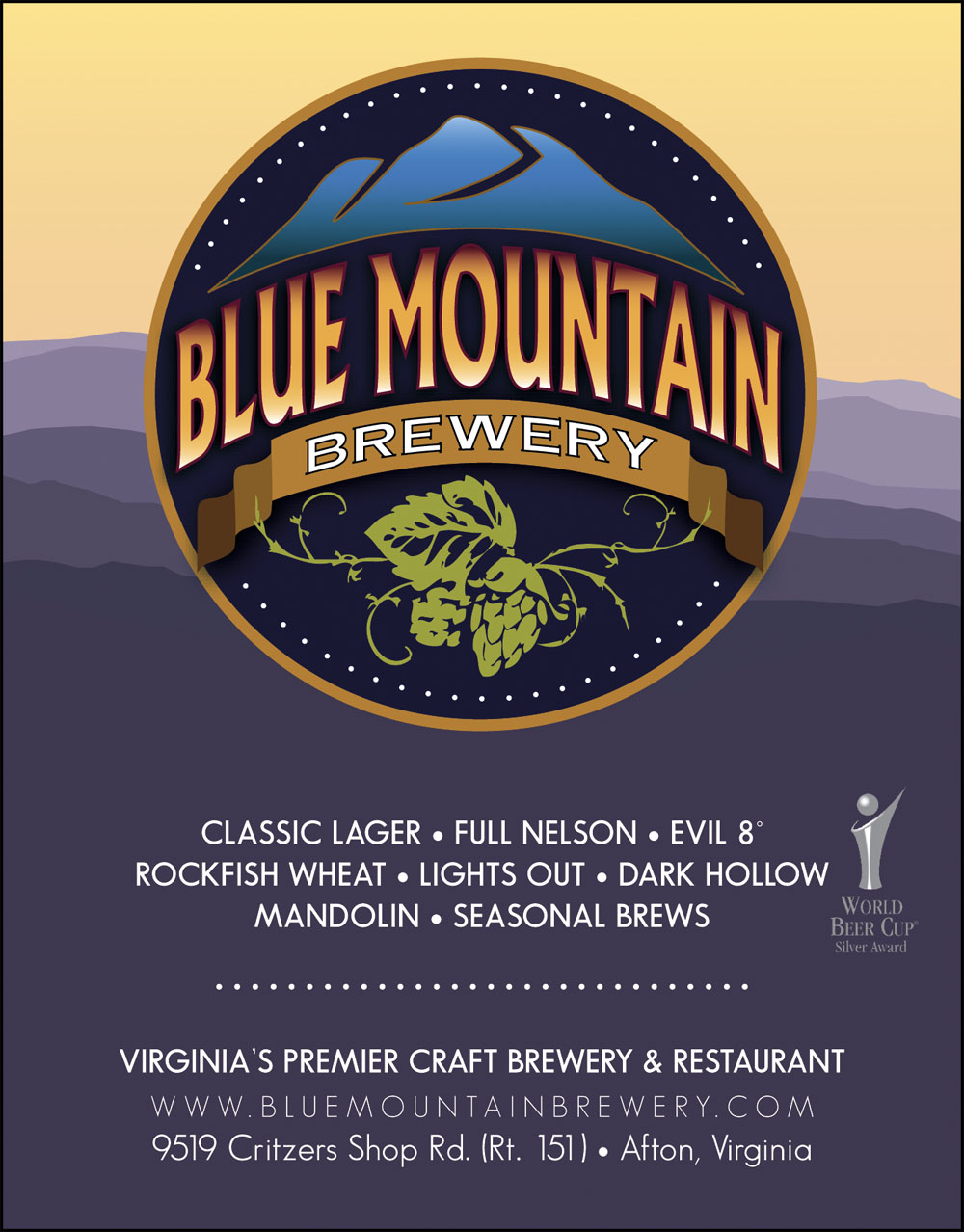 Blue Mountain is a casual farm brewery in the rural countryside of Nelson County. The small operation has a perfect location in the mountains of Central Virginia, just three miles from the entrance of Shenandoah National Park and a short drive from Charlottesville and Wintergreen Mountain Resort. Hop gardens surround the outdoor seating of the family friendly tasting room, which features inside seating as well as an outside beer garden, patio, and porch with views of towering Humpback and Afton Mountains.

Blue Mountain is the first and largest commercial hop grower in the state. You’ll taste the forcefulness of the Cascade and Centennial hops in the Full Nelson, an unabashedly strong pale that hits the palette with just the right amount of bitter bite. Other winners include the Evil 8 Belgian and the Rockfish Wheat. This fall Blue Mountain will unveil three special seasonals: the Chocolate Belgian Porter, the Humpbock Oktoberfest Lager, and the
Hop-Harvest Cascade Tribute Pale Ale.

In addition to a full roster of world-class craft beer, Blue Mountain serves tasty fare made from scratch that focuses almost exclusively on meats and produce from local farms. Try one of the extremely popular pizzas featuring homemade thin crust infused with herbs, olive oil, and honey. Carnivores shouldn’t miss the local pulled pork barbeque or the beer-boiled bratwurst.

Earn Your Beer: Take the short but brisk hike to the scenic overlook of Humpback Rocks, located at mile marker 5.6 of the nearby Blue Ridge Parkway. 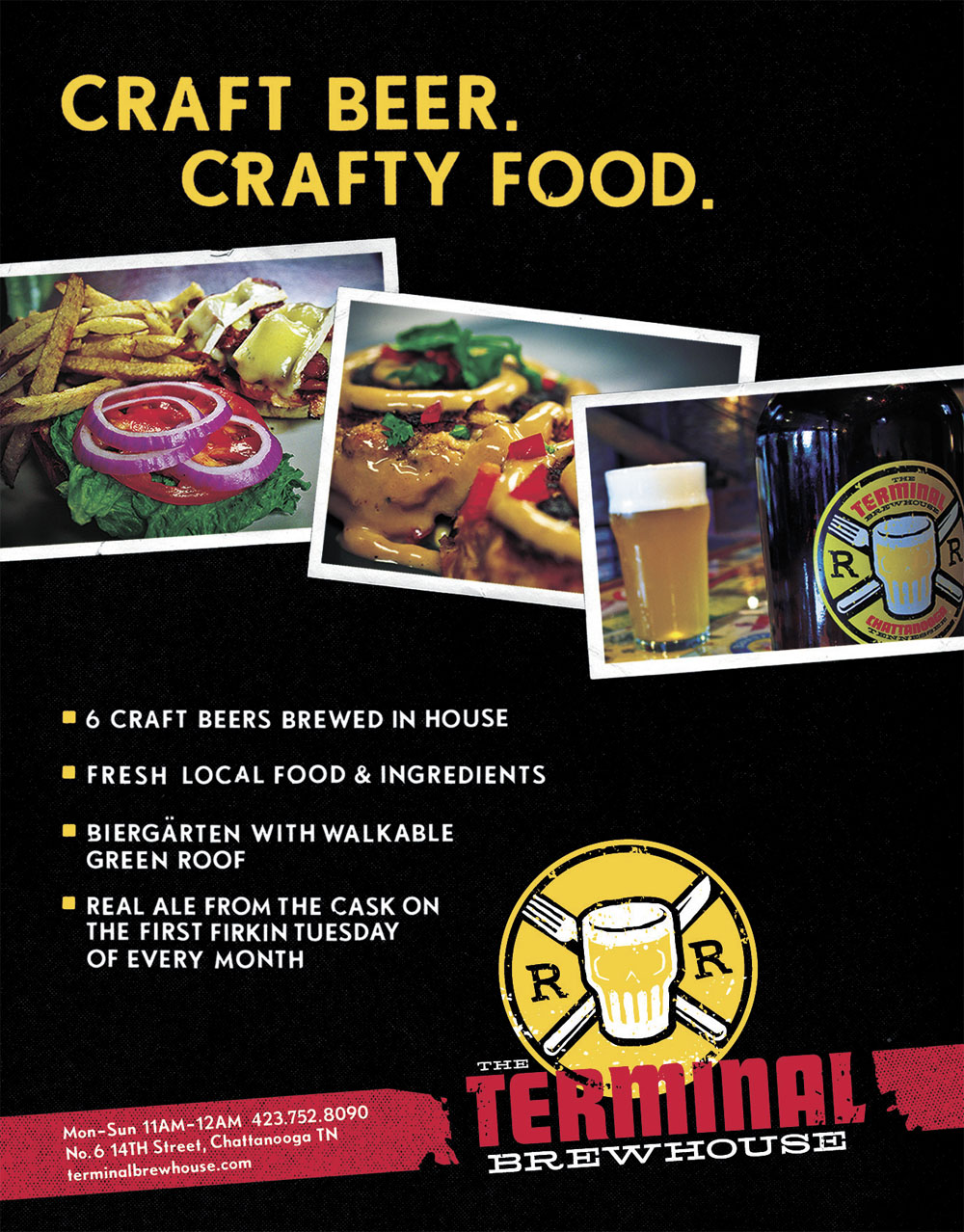 The Terminal Brewhouse
Location: Chattanooga, Tn.
Year Founded: 2009
Capacity: 175 inside plus 60 on Biergarten
Philosophy: We are a community driven local brewery/restaurant that wants to help build and progress the beer and food culture in the Chattanooga area.
Perfect Pairing: Terminally Ale American Copper and the Navin R. Johnson Salmon Plate
Hours: 11am until Midnight – 7 days a week
terminalbrewhouse.com
A century ago, the Stong Building in downtown Chattanooga was built as a hotel to offer railroad travelers passing through Terminal Station a resting place. Now, after an extensive restoration the historic brick building offers a different kind of comfort—locally made craft beer and delicious food. The Terminal Brewhouse was opened in 2009 to bring Tennessee’s scenic mountain city some high-quality craft brews with a sustainable mindset. The eco-friendly brewery used reclaimed pine for all of their table tops, and they are currently involved in a spent grain exchange program with local farms. Terminal also has a 650 gallon cistern that collects rainwater and uses low-energy hand dryers, waterless urinals, and low-flush toilets in the bathrooms. It’s all part of the brewery’s mission to help you be approachably green.

Terminal’s taps are flowing with six handcrafted microbrews including the tasty Magnum P.A., which combines the strong aromatic hop of a big West coast style double IPA and the subtle bitter hop finish of a traditional English IPA. Another fall favorite is the Southsidenstein Stout, a rich oatmeal stout that hits the palette with chocolate on the front and a smooth coffee finish. Enjoy a 20-ounce imperial pint with a Galactically Famous burger that’s concocted with locally made bread and nearby North Georgia bison.

Earn Your Beer: Grab your mountain bike and work up a thirst on nearby Raccoon Mountain’s extensive network of singletrack, developed by the Southern Off-Road Bicycle Association. 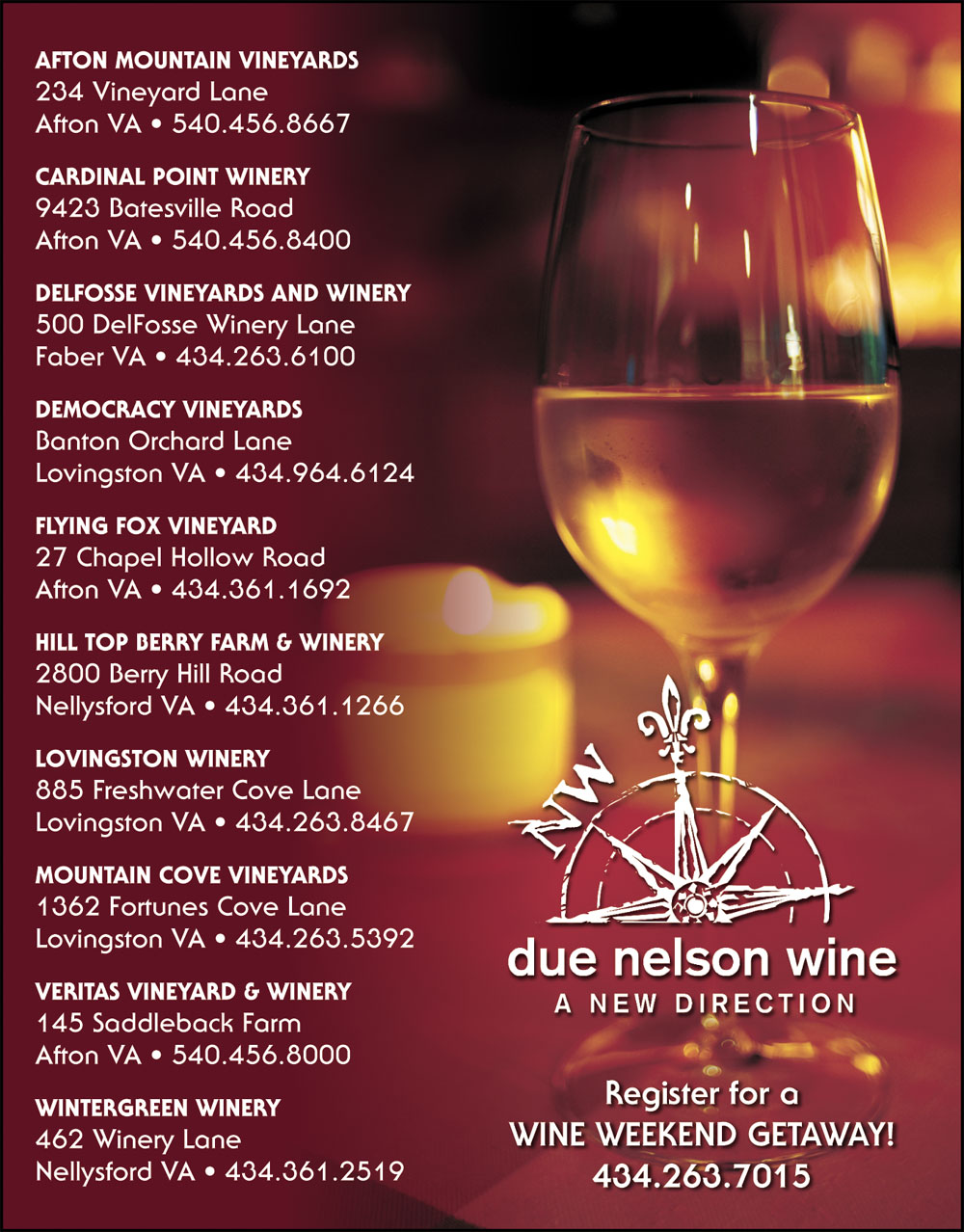 Wineries of Nelson County
Along the idyllic country roads of Nelson County, wine lovers will find 10 award-winning wineries with scenic settings and memorable mountain views. All are successful, family owned businesses with a different spin on the art of wine cultivation. Each winery has different attributes and unique offerings for the visitor experience – all among the bounty of beauty in the Central Virginia Blue Ridge.

Nelson County has several wildlife loops listed with the Virginia Birding and Wildlife Trail program. There is abundant fresh water fishing on the Tye River, James River, Piney River, and Lake Nelson for all levels of experience. With gentle rolling hills near the James River and challenging terrain in the Blue Ridge Mountains, the area is also a popular road cycling destination. Nelson County is also home to Wintergreen Resort—a four-season destination, with skiing, golfing, a spa, and family entertainment.