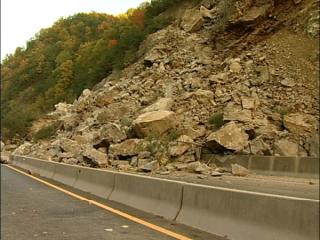 Last night, a landslide along Interstate 40 caused rock and rubble to tumble out into the roadway. Fortunately no life-threatening injuries were sustained.

Massive, forty-foot boulders and rock debris fill the entire westbound lanes of the interstate and even extend across the lane dividers and into the westbound lanes. The rugged metal fencing along the interstate was no match for the granite monoliths rolling down the mountain. View footage from the scene here.

The rockslide occurred near mile 2.5 along the portion of I-40 that parallels Great Smoky Mountains National Park. The winding, narrow, 20-mile section of I-40 through the Smokies is one of the most dangerous stretches of interstates in the country. Last year, AAA ranked this stretch was one of the top 5 most dangerous places to drive in North Carolina, and it has long been known for having the most tractor-trailer crashes in the country. Flooding along the Pigeon River wipes out a portion of this interstate five years ago.

News reports across the region have repeatedly said how the rockslide could not have come at a worse time: fall foliage season is at its peak, and a struggling tourist economy depends on the influx of October leaf-lookers. The rockslide has been often called  a “catatstrophe.” Government officials are calling it a disaster area. Th

However, when we blow up mountains to carve roads through them, we cannot expect the Earth to stop functioning. The Earth was just doing what the Earth does: moving. The Earth needs to convulse, to release energy, to shift and crack. The Appalachian mountains themselves are a result of the Earth’s tectonic plates colliding and upthrusting, eroding and upthrusting again over hundreds of millions of years. Those mountain processes continue today.  To think we can keep the mountains tamed behind metal fences is arrogance. Once again, the Earth has reminded us that it is larger than our understanding of it. Earth is not just a ball of rock and water to inhabit and exploit, but a living, breathing being that moves and shakes. When we build cities in earthquake zones or flood plains—or build interstates through steep mountains—we should not be surprised when there are consequences.