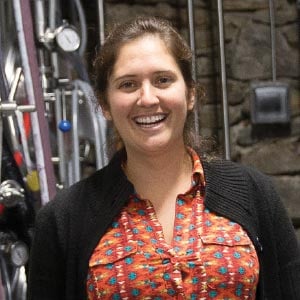 “One thing that makes this whole area unique is the water quality. Water is the biggest ingredient in beer and we’re fortunate to have pure, clean, unmessed-with water. That plays a lot into why there’s such a centralized craft beer boom in this area, but also the outdoor culture, too. Those two cultures go hand in hand really well.”

Editor’s Note: We should start by mentioning that we in no way condone drinking and driving. If you don’t have a designated driver, consider hiring a tour company to tote you around on your drinking road trip. Leap Frog Tours in Waynesville, N.C., offers a variety of brewery and other custom tour experiences for as little as $55 per person for up to five hours.

An hour southwest of Beer City, U.S.A., is the idyllic mountain town of Sylva, N.C., our starting point for this western North Carolina beer-venture. There are two breweries here, Innovation Brewing and Balsam Falls Brewing Company. For a town of about 2,600, that might seem like a lot, but there’s plenty of sudsy love to go around. They’re less than a block away from each other, so you’ll be able to try ‘em both without ever needing to get in a car.

Innovation Brewing is situated right on Scott Creek and will be dishing out wood-fired pizzas this summer for the first time since the installation of their outdoor oven. If pizza’s not your thing, you can always grab a cheeseburger from the brewery’s food-truck-in-crime, Cosmic Carry Out. Stay and hang Friday night for music at the brewery or shuffle over to the Mad Batter if the weather turns. This cool eat-in theater is located in one of Jackson County’s most historic buildings and has nine different North Carolina brews on tap.

Once you’re good and sober, cruise up the road to Dillsboro. Innovation just opened a taproom in the old railroad depot here, so you can grab one last drink before tapping out. The Dillsboro Inn (rates from $110 per night) is perched right along the banks of the Tuckasegee River, which means you can cast for trout right out the door to your room.

Your final destination on day two will be Franklin, N.C. How you get there is up to you. If you want to taste the soulful beers brewed deep in the southwestern heart of the state, make a pit stop in Andrews (Andrews Brewing Company and Hoppy Trout Brewing Company are based here). If you’d rather spend more time outside than in a car, hike up to the fire towers on Wesser Bald or Wayah Bald along the Appalachian Trail. Whatever you decide, begin your day first by driving 20 minutes from Dillsboro to Bryson City.

Once known only for the Great Smoky Mountain Railroad and the Nantahala Outdoor Center, this mountain town is coming into its own as a microbrew destination. Both Nantahala Brewing and Mountain Layers Brewing Company make phenomenal beers and have embedded themselves in Bryson City’s outdoor community. Grab an App Trail Extra Pale Ale from Nantahala or a Newfound Gap Golden Ale from Mountain Layers, then hit the trail for which these beers are named.

Take the Indian Lakes Scenic Byway, or Highway 28, south towards Franklin. You can hop off 28 onto Tellico Road to reach the trailhead for Wesser Bald, or drive through Franklin and get on Wayah Road, which you can drive all of the way to the fire tower if that’s more your style. Whether you explore Andrews or the Appalachian Trail, eventually you’ll land in Franklin, which was twice voted the Top Town in the Blue Ridge by our readers.

Nestled in a bowl of 5,000-foot peaks, Franklin is the quintessential mountain town. Even if you’re not a hiker, there’s great smallmouth bass fishing on the Little Tennessee River. The two breweries here are Lazy Hiker Brewing Company and Currahee Brewing Company, the latter of which is located right on the river. You can also grab a local brew over at the Rock House Lodge, which is nested inside Outdoor 76. Beer. Gear. Music. You call it an outfitter-taproom. We call it heaven. Cozy up for the night at Cat Creek Lodge (suites from $149 per night). The mountain views alone are worth the price.

Top off your weekend of country road cruisin’ and craft beer boozin’ with one last stop in Cashiers. This little treasure trove of a community just got its first craft brewery earlier this year, Whiteside Brewing Company, named for that formidable mound of rock that juts out of the otherwise verdant land between Highlands and Cashiers. You can earn those liquid carbs by hiking to the top of Whiteside, a short loop that totals 2.5 miles. Fuel up with burgers and beer at the brewery, or do brunch first at The Ugly Dog Pub. Depending on which way you’re headed home, pick up a growler to go either in Highlands (Satulah Mountain Brewing Company) or Sapphire (Sapphire Mountain Brewing Company).

The hike-in lodge at the top of Sandy Mush Bald is one of the South’s best-kept secrets. Sandy Mush Bald is one of the only privately owned balds in Southern Appalachia. The Adler family, the long-time owners and conservationists, have protected the mountain bald and the surrounding 500-acre wilderness. To reach the hike-in lodge and cabins, visitors park at the bottom of the mountain and hike up two miles to the 5,150-foot summit.