Summer Road Trips: For The Foodies 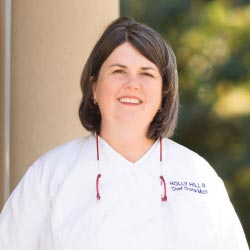 “I don’t think people really know what Kentucky food is because it’s been so closely identified with Kentucky Fried Chicken. For me, Kentucky’s cuisine is related to history and it’s related to agriculture, and I want to make sure the longstanding iconic dishes of Kentucky don’t die out. I want dishes like spoonbread and grit soufflé to move forward into the cuisine spotlight but not in a way that would make them trite or tired. At the same time, the university here [in Lexington] brings a hugely diverse population and the subsequent cuisine is just as diverse, from Indian to Japanese. The one thing that remains constant is the widespread use of local ingredients. I think people will be surprised when they come here.”

Over the past decade, Chef Ouita’s hometown of Lexington has masterfully woven the sundry threads of a community into a seamless patchwork of streets that each has a vibe unto its own.

Begin on Jefferson Street with brunch at Stella’s Kentucky Deli, a quaint little neighborhood deli that’s based in a charming two-story yellow house. From here you can walk to just about anything you’d like—distilleries or breweries, clothing stores, and bourbon shops. Ouita recommends following the Brewgrass Trail to reach The Bread Box at the end of Jefferson Street. Once the site of a 100-year old bakery, this historic building is home to a number of different establishments, including one of Ouita’s own restaurants Smithtown Seafood, the urban farm and aquaponics non-profit FoodChain, the Broke Spoke Community Bike Shop, and West Sixth Brewing.

If you’re in need of a mid-afternoon caffeine fix, wander over onto NOLI (short for North Limestone) and stop in at Wild Fig Books and Coffee, Lexington’s very own “writer-owned, black-owned, counter-gentrification bookstore.” Settle into this cozy brick building for a latté and a poetry reading before heading down the street for a healthy, vegan-friendly lunch at the Broomwagon. This one-stop-shop has a bike shop downstairs plus a coffee house, beer garden, and café on the second floor.

Before leaving Lexington, honor your sweet tooth with some locally made ice cream from the Crank and Boom. Ouita’s go-to is a scoop of salted caramel ice cream with a shot of espresso, but you can get just about anything you want, including an ice cream cocktail (yes, you read that right). Try the Stout Dreams,  a scoop of coffee stout ice cream with Buffalo Trace bourbon cream, espresso, and brownie crumbs on top. Dinner tonight is at Ouita’s flagship store, the Holly Hill Inn, which is listed on the National Register of Historic Places. Surrounded by verdant Kentucky horse pastures in Midway, Ky., the inn-turned-restaurant has roots back to the 1800s. Taste any number of the 50 bourbons offered at the Holly Hill bar before letting the spirits guide you along the Kentucky Bourbon Trail to your accommodations at the Woodford Inn in Versailles. Rooms here run about $169 per night and are just down the road from Woodford Reserve Distillery.

After a hearty breakfast at Woodford Inn, head south toward Berea. About halfway to your final destination, you’ll pass through Shakertown, named for Shaker Village of Pleasant Hill. This 3,000-acre farm and community is one of the largest National Historic Landmarks in Kentucky and the country’s largest collection of privately owned 19th century buildings. You can tour those pristinely kept buildings, ride a horse (you are in the home of the Kentucky Derby, after all), and gorge on fresh-from-the-garden food at The Trustees’ Table before hopping back in the car for another hour.

The town of Berea is revered for its artistic influence. Many weavers, instrument makers, potters, and other artisans make their homes in this wonderfully eclectic college town. Berea College itself is historically significant in that it was the first interracial and coeducational college in the South. You can check out all of the town’s artistic mastery at the Berea Craft Festival, which will take place later this month July 13-15. If you need to stretch your legs, the John B. Stephenson Memorial Forest and Berea City Trails are both great close-to-town options for hiking.

At day’s end, pop open a cool Kentucky-made Ale-8-One and dig into an authentic Asian noodle bowl from Noodle Nirvana. The Pinnacle View Inn is right in town and offers rooms with a view starting at $109 per night.

Grab a hand-rolled bagel from Native Bagel Co., before setting off on your final day. You’ll quickly leave the noise of civilization behind as you drive further east into the Daniel Boone National Forest. The Red River Gorge is one of the best climbing destinations in the world, so if you’re a climber, the Red’s hundreds of miles of sandstone cliff lines hold enough routes to keep your forearms pumped for a lifetime. Not a climber? You can still get a sense of the Red’s uniqueness by hiking beneath soaring natural rock arches.

Your last culinary pitstop of this road trip is none other than the climber classic, Miguel’s Pizza. This made-to-order pizza is about as casual as it gets, with a first-come, first-serve campground out back and a gear shop located inside. But don’t let the down-to-earth vibes fool you. Even if there’s an hour-long wait, the pizza’s worth it.