Go OutsideThe Double Thru-Hiker Who Wore A Tunic And Sandals

The Double Thru-Hiker Who Wore A Tunic And Sandals

From February 22 to December 29 of 2016, 23-year-old Crozet, Va., native and recent Princeton University graduate Adam Geilker did something rather astounding: Setting out from the peak of Hightop Mountain in the Shenandoah National Park at high noon, he headed northward on the Appalachian Trail, hiking first to its terminus at Katahdin in Maine, then to the southern terminus at Springer Mountain in Georgia, whereupon he turned around and hoofed it right on back to Hightop. All told, the walk totaled over 4,400 miles—over 1,000 of which were completed barefoot.

“I carried my own pack every step of the way and never slack-packed,” says Geilker. “I didn’t mail myself food or care packages, but hiked or hitched into town for resupply. And I didn’t use paid shuttles—although that was based more on frugality than any kind of purist principles.”

“I made the backpack prior to freshman fall orientation at Princeton,” says Geilker. “The college does this big, kind of iconic hiking trip every year. I didn’t want to be the guy carrying his dad’s old hand-me-down pack from the 70s, so I decided to make my own.” 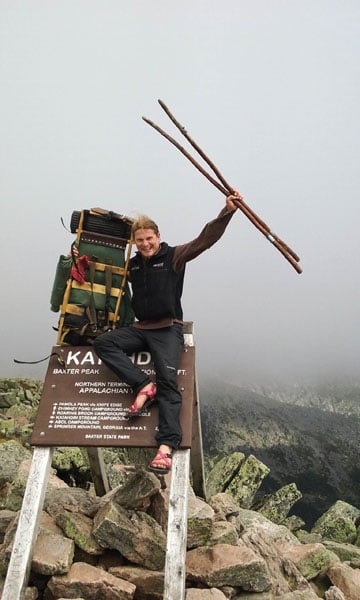 Geilker was pursuing a degree in mechanical engineering, and he “worked maniacally for something like 80 hours” to construct a custom external-framed backpack. First, he harvested with an axe a 6-inch diameter white oak for the frame, which he subsequently split, ran through a planer, and shaped with a jigsaw, drawknife, carving knife, and rasp into two uprights. Using the remaining chunks from the log, he fashioned cross-braces which, like an antique chair, were connected to the frame by means of mortise and tenon joints. For the pack, he used an old denim jacket reinforced with leather. Straps were made of recycled U.S. Army webbing, with buckles gleaned from old laptop bags and throwaway backpacks. While the unit weighed 10 pounds empty, aesthetically it looked more like an artifact from a Kerouac novel than a garage project pulled off on the cheap.

However, Geilker’s intentions for the pack wound up unfulfilled. “The weekend of the camping trip it rained and they canceled the event,” he said. “But when I graduated and decided to hike the A.T., carrying the pack seemed appropriate—like a full-circle gesture connecting everything together.”

He saw his A.T. hike as a one-time post-college rite of passage. “There’s this saying on the trail that goes, ‘Hike your own hike,’” he said. “When I was setting out to do this, I really took that seriously. I wasn’t—and still am not—planning on doing another thru-hike like this one, so, if I was going to do it this one time, I wanted to approach it in a way that was uniquely my own.”

As you can imagine, in a realm dominated by hikers equipped with the latest most ultra-lightweight technologically advanced gear available, Geilker drew quite a bit of attention.

“I met him on a stretch of trail outside of Hanover in New Hampshire,” said Sean Cardle, who was working on completing his own NOBO thru-hike at the time. “He had dirty blond hair, blue eyes, a wispy beard and was wearing this strange one-piece tunic that looked a bit like Peter Pan’s outfit, only brown.” Additionally, Geilker had on flip-flops and was carrying a full-sized axe. He looked pretty eccentric.”

Geilker was using the axe to clear a section of trail littered with blowdowns. “He was cutting through thigh- and torso-sized trees by hand with an axe,” Cardle recalled.

“I counted between 175 and 200 blowdowns over the course of a 75-mile segment of trail, which took about eight 16-hour days to cut through by hand,” Geilker explained. “I couldn’t stand to see a trail looking like that, so I did something about it.” 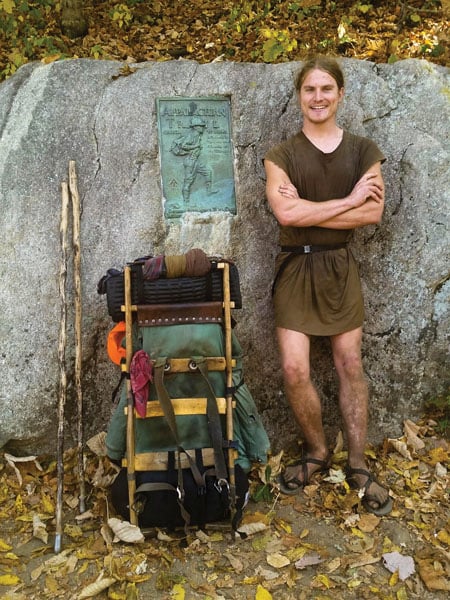 Geilker tends to maintain a kind of no-nonsense pragmatism about his double thru-hike, describing the trip as more akin to a lengthy vacation than any sort of find-thyself self-discovery mission. “I set out from Crozet and hiked to the trail because, as an environmentalist, I couldn’t bear the thought of hitching a bus, plane, or train ride 1,300 miles to either end of the trail.”

And yet, considering a trek that had him hiking through two winters and thousands of miles of mountains, Geilker doesn’t shy away from pointing out the philosophical virtues of spending that much time on the trail. “Our post-industrial society is somewhat alienating to the individual for two reasons. First, if you were to suddenly disappear, in many respects you’d just be replaced, which makes it feel like society doesn’t need you. Second, the basic necessities of life are so readily accessible that obtaining them sometimes fails to afford satisfaction. In other words, society can alienate you by giving the impression that it doesn’t need you and that you don’t even need yourself,” he mused. “But on the trail, I need food, water, and shelter—and other people—far more immediately than I do in typical day-to-day suburban existence. Not only do I appreciate these basic necessities far more on the trail, but I can appreciate my own agency in getting them. Fundamentally, I need me far more on the trail—my judgment and my physical ability constantly and directly translate into fulfillment of my needs, and are measured by my daily successes or shortcomings as a hiker. This sense of needing yourself and having greater agency is healthy, deeply satisfying, and serves as a kind of antidote to our day-to-day suburban existence.”

Ultimately, while he confided the trek sometimes felt like a major indulgence, Geilker says he’s happy with what he accomplished and is confident that the experience will inform his life in a myriad of positive ways. “I’m not just a hiker,” he said. “I’ll take the tremendous personal capability I’ve shown on the trail and apply it to bigger, more significant situations throughout the rest of my life.”

Three-thousand of Adam Geilker’s 4,400 A.T. miles were walked in two pairs of newly designed, 3-D printed OESH sandals he glowingly described as “the best shoes I’ve ever owned.” Geilker wore a pair of Athena Bubblegums—which are pink—for 1,000 miles and then a pair of black Artemis Obsidians for 2,000 miles.

Developed through grant funding provided by the National Science Foundation, the sandals are the product of Dr. Casey Kerrigan’s obsession with human movement. A Harvard Medical School grad, Kerrigan published many scholarly papers based upon her research. “Eventually, I got fed up with the shoe industry continuing to make unhealthy shoes and decided we should make our own.” 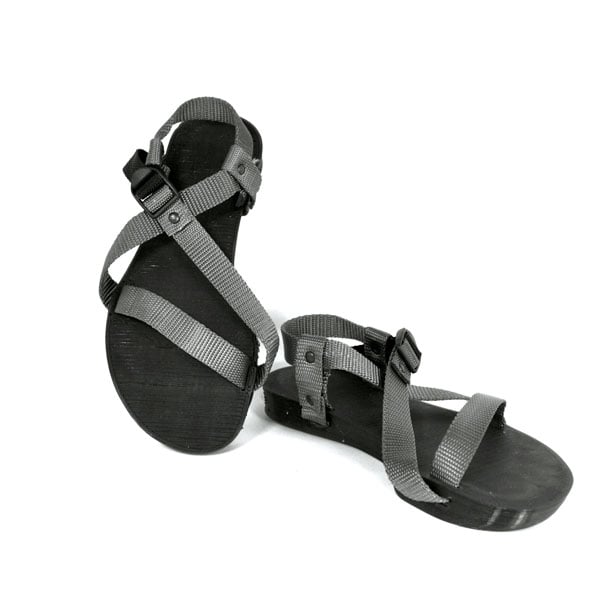 In 2010, Kerrigan left her job at the University of Virginia, where she’d become the first woman tenured professor to serve as the chair of the department of physical medicine and rehabilitation. The name OESH was a pun suggested by a friend whom, upon considering Kerrigan’s research and what it would mean for women’s footwear, said the M.D. was going to turn around and twist the s-h-o-e industry inside out. This spring will be the first time the company markets its new line of 3D printed sandals.

“We make the sandals on demand, and we’re piloting for local customers who can come into the factory for assessment,” said Kerrigan. “We’ll take your measurements and assess your biomechanics, and design sandals specific for your body.”