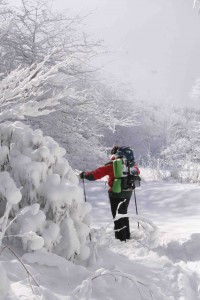 The infamous weather system kicked in during the summer, bringing plenty of rain to the Southeast, and giving us one of the wettest summer/falls this region has seen in several years. There were mudslides on the Parkway, flooding in Georgia, and some seriously damp basements in between. Watching the flooding footage on the news, I can’t help but wonder, “Am I going to ski powder this winter?”

The National Oceanic and Atmospheric Administration thinks so. In their 2009 Winter Outlook, the really smart meteorologists predict El Nino will dominate the U.S.’s weather from December to February. Correct me if I’m wrong, but that’s ski season. In the past, El Nino has meant below average winter temperatures for the South and Mid-Atlantic. If that trend holds true this winter, and the Noah’s Ark level of precipitation continues, we’re looking at an epic ski season.

The snow hasn’t started to accumulate in our region yet, but Western states are already reaping the bounty. Arapahoe Basin in Colorado has been open since early October, its earliest opening in 60 years. The optimist in me thinks it’s only a matter of time before El Nino dumps several feet of powder on our Southern slopes.

Want to get stoked for ski season? Check out these short clips of park skiing at Appalachian Ski Mountain and tree skiing at Whitegrass.