Adventure Racing Is Not Dead

The AR Scene Is Thriving, Especially in the Southeast and Mid-Atlantic 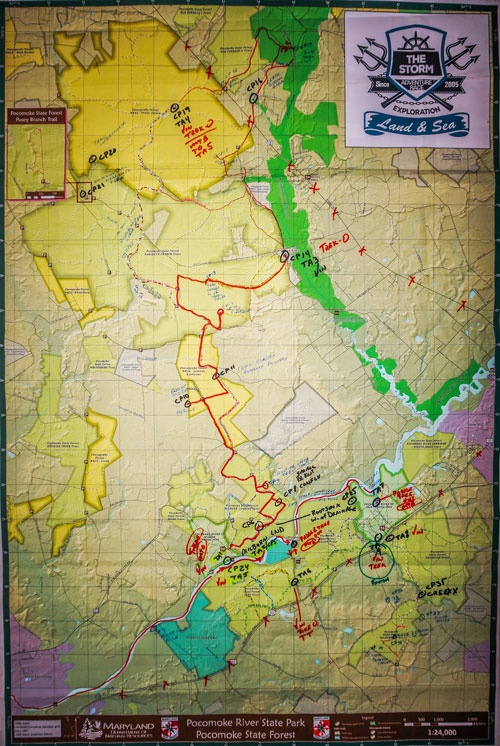 Adventure racing is basically a timed scavenger hunt in the woods. Racers must find checkpoints located deep in the forest and return to the start/finish. They plot checkpoint locations on topographical maps and then run, hike, paddle, climb, and mountain bike. All while using a compass to navigate and locate the checkpoints. For the majority of the races, each checkpoint is worth one point.

The team with the most checkpoints within the designated time wins. If there is a tie in points the fastest time wins. Depending on the race some checkpoints are mandatory and some are optional. Transition Areas (TA) are also plotted on the map. They are used as places where a team will transfer from foot to bike or paddle or vice versa.

At the start of the race,

the teams will be given maps and are given a small amount of time to plan their routes and review specific race rules. Races vary from a three-hour beginner event to a multi-day expedition.  Each race varies on what gear is mandatory. Which usually includes basics such as backpack, bike helmet, bladder for water, compass, small emergency kit, rain jacket, and clothes appropriated for the season.

Most races, but not all, include paddling in a canoe or kayak, mountain biking, and trekking. This is much more than a triathlon in a kayak. The race may have a team on and off a mountain bike multiple times and transitioning to foot going off trail to find the checkpoint.

How hard is it really? 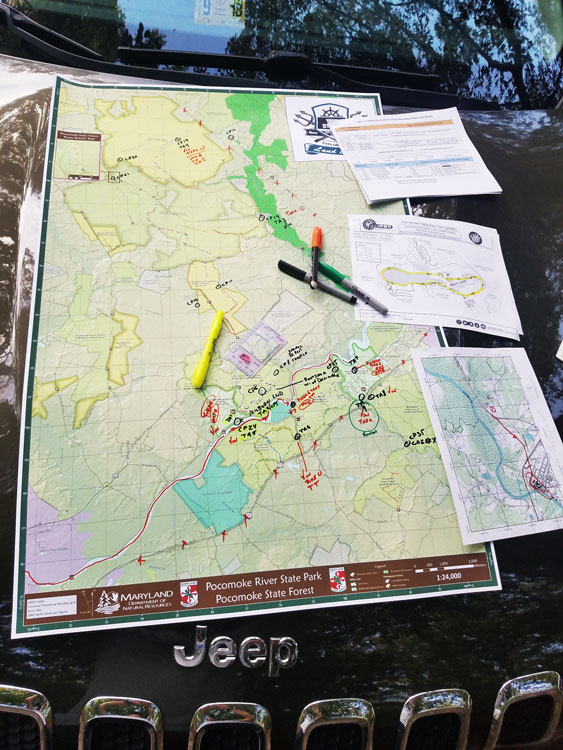 While fitter and more competitive teams may be able to paddle, run, or bike faster over the designed course, many of the basic 2-3 hour races require the fitness level needed to complete a day walking around a mall or amusement park. The navigation knowledge is easy enough as a simple trail map that one could get at a state park. The checkpoints may be located at trail intersections of just off trail.

Any new teams or soloist can show up early and can receive a basic crash course of map and compass use. The more intense longer races could have more detailed navigational requirements, courses that may require off-trail pace counting and compass use to put a team directly on a checkpoint.

is the abundance of quality race directors. These race directors are also competitors in races not of their own. The checkpoints they put out are not just scattered on a map to make a team tired. They are strategically placed and give teams options to attack them from different angles and by different means. The race directors spend months in advance planning the race, acquiring park permits, and getting permission from locals to use sections of private property. They test out the sections of the courses to ensure everything is where it’s supposed to be and ensure things can be obtained in a reasonable time.

In adventure racing, the race directors are not tied to a specific set of governing rules that say thou shall have a two-mile water section and must use mountain bikes with tires of a certain diameter. Whatever they deem fit for the course is what they use.

In one 28 hour race in 2017, on the Eastern Shore of Maryland soloist and teams paddled in canoes, on a tidal river, with their mountain bikes disassembled in the hull of the vessel on multiple occasions, even in the dark. It was the first race for a few of the teams that day. They all were able to complete it.

The best part of adventure racing is the people

Adventure racing is designed for those people who love the outdoors, who enjoy campfires, sleeping outside, and just being in nature. In triathlons or similar sports, there is not a team aspect, there is little conversation while your face is in the water bilateral breathing. When on the bike it’s illegal to be too close to the person ahead of you. While running it’s possible for small conversations and waving to a passerby.

In adventure races, however, there is normally a designated team captain, a navigator, and additional team members. Paddling a canoe with 3 people while using kayak paddles is a feat unto itself in teamwork. While on the bike, a team member can rig a simple towing system to assist a teammate (practice before the race, this is advanced), and carrying a fatigued person’s pack can make a world of difference in team speed.

It’s not about how fast the fastest person can go, but how fast the team can get the slowest person to go. The sense of accomplishment isn’t isolated to just finishing the race. Each checkpoint is a small victory. Completing each leg of the race is a battle won. The bond you have after a good suffer for hours in the woods is one that cannot be replaced.

Just get out there

The Southeast and Mid-Atlantic have an abundance of mountains and navigable rivers that are perfect for adventure racing. This fall the USARA Championship will be back in the region. Asheville will be the host city for the national adventure racing championships. The race is a 30 hour non-stop competition. It will line up teams of three against each other and the course.

There is a resurgence of Eco Challenge Adventure Race happening in Fiji which some people may remember on the Discovery Channel in the ’90s. There is a chance that we as the Mid-Atlantic region could be well represented there. And a team from the Tidewater area of Virginia is competing in a world-class adventure race on Rodrigues island in Africa.

Wanna give it a try? Start with a short 2-3 hour adventure race, or perhaps even an orienteering or Rogaine event—which is like a larger scale of orienteering but checkpoints vary in value and races could last over a day, just on foot. If it’s your first adventure race, let the race directors know, and they may be able to pair you up with like minded individuals ahead of time. Or if it’s a gear issue, they may have resources to get you in the woods. If you’re looking for a challenge, it’s out there waiting.