Are Speed Records Wrecking the A.T.?

How fast is too fast?

It’s a common question on the Appalachian Trail. That was especially true when I hiked a section in mid-July, because I asked it of just about everyone I met.

Harvey Lewis, a schoolteacher from Cincinnati, was just then wrapping up an unsuccessful assault on the A.T. thru-hiking record. Such attempts have become so frequent and well-publicized in recent years that the nation’s most revered hiking trail now sees double duty as an ultramarathoning track.

So, is that okay?

No, several hikers told me. The A.T. is not just a trail but a shrine to self-discovery and contemplation, a “refuge from the crassitudes of civilization,” according to Benton MacKaye, the conservationist who came up with the idea of the Appalachian Trail. If haste and competition are among those crassitudes, then bringing them to the A.T. can seem downright tacky.

“The A.T. was built to be savored and enjoyed,” said Todd Engels, 53, a day hiker I met just north of the famous trail town, Hot Springs, N.C. Treating it as a racecourse “fails to appreciate the majesty for which and with which it was created by Mr. MacKaye.”

On a recent A.T. section hike, he said, the practice of racing on the trail “was a big topic of discussion at the shelters.” And when two teenage trail runners arrived at a campsite suffering from hypothermia, Engels’ fellow hikers helped them only grudgingly.

“There was this general resentment towards them, like, ‘Why are you running the Appalachian Trail?’ There are other trails you can run,” he said.

A refuge is just what the A.T. is, said Phil Ayres, 48, a pastor of a non-denominational church in Florida, at a campsite a few miles farther north. It’s a venue for connecting with both nature and with humans on different terms than at home.

“You meet all these people and you don’t jump into politics and how you feel about Trump. It’s usually talking trail stories and gear. It’s about the adventure.”

You can’t do that in a rush, Ayres said, and this being the weekend of the MLB All-Star Game, the Home Run Derby made a convenient point of comparison.

My preferred analogy is eating. A big hike, like a big meal, can be a good thing. But somewhere along the line, record chasers brutalizing their bodies with a succession of 50-mile days start to seem like Joey Chestnut packing his face with hot dogs. It’s clearly too much.

Not if that’s how they want to hike, said Wayne Watts, 36. He teaches theory of knowledge at a Utah high school. His trail name, “Socks,” is a mangled abbreviation of Socrates.

He hiked the middle section of the trail in 2016 shortly after his younger brother had committed suicide. Many of his fellow hikers had been through similar traumas and found peace in the trail’s greatest gift, he said, the freedom to “hike their own hike.”

Watts said he met a backpacker with a heart condition who was happy to walk a few miles each day. “I also met this guy named Bambi and he was just hopping down the trail, dude. He was fast!” But after putting in a few 30-mile days, Watts said, Bambi “liked getting into town and getting into a bar and spending a week getting drunk. That was his hike and that was cool.”

Joe “Stringbean” McConaughy, who set the overall speed record last year both unsupported and under the radar, is usually praised as the racer who stayed truest to the spirit of the trail. Famed ultramarathoner Scott Jurek, on the other hand, was widely criticized for his corporate sponsorships and the unseemly celebration of his 2015 record at the A.T.’s northern terminus, Mount Katahdin, in Maine.

Watts wondered why anybody cared. “If I see Scott Jurek running by me for like two seconds, how the hell is that going to bother me?”

Watts, who had recently put in a 29-mile day while wrapping up an eight-week “yo-yo” hike from Sam’s Gap north of Asheville to the southern end of the trail and back, also pointed out the obvious about hiking: physical challenge is part of the appeal.

“I like the feeling of accomplishment at the end of a big, long day,” he said.

Even pursuing the most extreme challenge doesn’t keep racers from loving and respecting the trail, said Aaron Saft, the owner of Asheville’s Foot Rx running store, whom I called after my hike.

Saft has never attempted an A.T. thru-hike record but as one of the region’s top ultramarathoners, he appreciates the “amazing” level of fitness required. He also knows that these runners take as much pleasure in the “experience and the views as any thru-hiker does,” said Saft, 40, who is also a trail maintenance volunteer and race organizer. 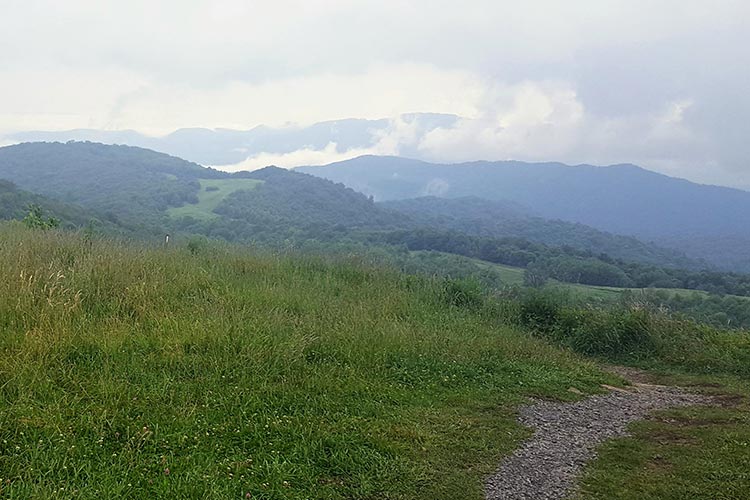 “We might not be stopping at an overlook and resting. We might just take a moment and take a look, but that’s part of the enjoyment, just being out on the trail and moving forward.”

In fact, the fastest record seekers and the slowest backpackers are far more similar than they are different, said Morgan Elliott, 26, of Asheville, another of the area’s top trail runners.

“They both enjoy being out in nature. They share a goal of pushing themselves. They both end up on the trail looking for something,” he said. “I’m going to call it happiness, because that’s what everybody is looking for.”

Greater self-awareness is another common goal, and as I walked, I realized my hypocrisy in judging racers. To the extent that I am able, I’ve always been a bit of a racer, too.

I started out this hike that way. My first full day was a big one, at least for me. But looking at the map in Hot Springs, I realized that I couldn’t go as far as I wanted in the next two days without subjecting my wife to a sketchy, late-evening pickup at a remote road crossing.

So I settled into a 14-mile day, realizing that the advocates of moderation also have a point, that pushing for miles necessarily comes with downsides.

The biggest of these, hands down, has been turning hikes into objects of dread for my now-grown sons. “Sounds miserable,” my younger one said when I’d told him about my plans for this trip.

On the previous day’s hike, I’d put off stopping to tend to a hot spot until it grew into a bloody blister. Going light on water in the interest of speed had burdened me with worries about the distance to the next water source. That and other time-and-mileage-related matters was pretty much the extent of my interactions with other hikers.

On my shorter day, I struck up most of the conversations I’ve recorded in this story. I took time to rest under a particularly inviting pond-side oak and stopped regularly to try to identify birds, mushrooms, and understory plants.

It was a novelty, reaching camp in mid-afternoon with a sensation other than exhaustion. I cooked a decent meal and built up some good trail karma by helping another crew of hikers clean out a filthy shelter. Because my next day was my last day, and easy, I volunteered to pack out the trash.

And if, as I headed out, Jurek had rushed by me, on his way to a night in an RV and a hot vegan meal, it wouldn’t have bothered me one bit.