My brother and I had a simple out-and-back planned in a remote section of the Great Smoky Mountains National Park.

We would hike up to one of the shelters scattered along the Appalachian Trail. After spending the night we’d head back down the mountain. The itinerary seemed simple enough, so when the rain started falling, we didn’t think anything of the light pitter-patter on my cheap big-box-store tent. However, we quickly learned a lack of preparation almost lead to our demise. After spending a cold, wet night in the shelter we started down a steep trail that was eroding beneath our feet as we hiked on the saturated ground. We both sighed deeply when we stumbled into the campground at the terminus of our trail. It wasn’t until seeing the car that we knew things would be okay.

Any trail can be dangerous, without the proper respect for nature, preparation, or knowledge of navigating through the east’s rhodo-thick forests. Just ask ‘Hike More Adventures’ guide, Curt Teague. He started this western North Carolina service in 2014 with a buddy after they had been guiding family and friends into remote parts of the Pisgah National Forest and Linville Gorge since 2001. 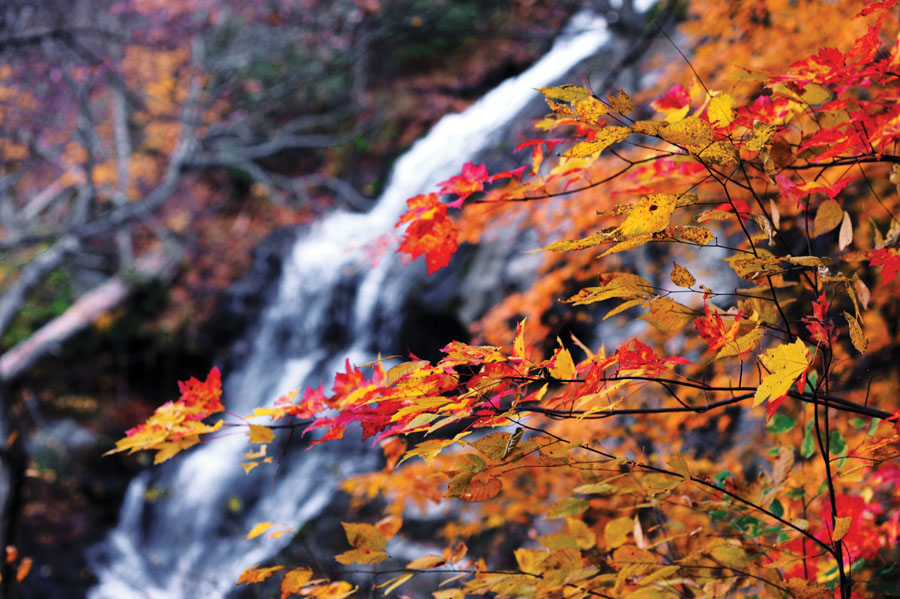 “Some of the danger factors in the Linville Gorge are always the obvious ones that someone might encounter in any backcountry situation,” he said. “Snake and bear encounters, poorly marked or overgrown trails.”

This leaf-peeping season, we challenge you to earn your colors by tackling one of the five toughest trails in Appalachia. All of these trails are strenuous slogs, but you’ll be rewarded with some of the most spectacular fall scenery in the South.

Leave the hordes of tourists searching the asphalt pull-offs for black bears and hike to this remote backcountry trail near Cades Cove. Part of what makes the Eagle Creek trail so extreme is its lack of easy accessibility. The trailhead can only be reached by hiking from the Appalachian Trail (via the Bote Mountain trail) or the Benton Mackaye Trail. Your other option is boating across Fontana Lake (leave from the Fontana Marina). This nine mile out-and-back is prime black bear country. This summer, a black bear attacked a hiker and his son on the adjacent Jenkins Ridge Trail, forcing the closure of several backcountry campsites and neighboring trails.

If the remoteness and wildlife aren’t enough to spike your adrenaline levels, then maybe the Eagle Creek will. The trail has 15 creek crossings, often requiring master fording skills. You won’t find tube-sock-sporting day hikers on this trail, and you can forget about bridges. You’re on your own. After heavy rains and in early spring, some of these crossings can prove even more challenging, with knee- or even waist-deep wading required.

Climbing the highest peak east of the Mississippi should be on everyone’s bucket list. For the serious hiker, this trail doesn’t disappoint. Nearly six miles of monster switchbacks and rocky footing place this trail firmly in the strenuous category. What makes this hike even more challenging is not what’s beneath your feet but above your head. Weather is unpredictable at the top of the Black Mountains. Sudden rain, lightning, or snow storms pop up quickly. If not prepared, hikers have been known to get stuck in storms, and hypothermia can be a real concern. In winter, snow storms dumping large amounts of powder and ice that leave trails impassible. Even the most seasoned peak bagger can find themselves stranded.

The Linville Gorge has earned the reputation as the most rugged landscape in the East. Many hikers have lost their way in the gorge wilderness, and a hiker had suffered a heart attack while attempting to climb the Pinch In Trail.  Another hiker broke his foot at the bottom of the gorge and had to crawl out.

The Linville Gorge’s real danger comes in its Rocky Mountain style ruggedness. Trails don’t follow switchbacks or the line of least resistance. Instead they charge right up the cliffs. The Pinch-In Trail measures just 1.5 miles from its intersection with the Linville River Trail to the top of the ridge 1,700 feet above. In addition to the grueling climb, a wildfire has decimated the forest, leaving you fully exposed to the unforgiving sun as you climb. Nearby, the Rock Jock trail flanks the steep, craggy side of the gorge, following a fairly consistent elevation. However, what this trail lacks in difficult climbs it makes up in way finding. No blazes mark the trail, and overgrown sections with numerous side trails make it easy for someone to get truly and seriously lost.

In the Red River Gorge, walking too heavy footed through the trees could mean falling head first off a 100-foot sandstone cliff. Every year hikers fall to their deaths as they lose their footing on a cliffside trail and end up at the bottom of a ravine. While most trails within this national forest are out of harm’s way, one section of trail in particular has intrigued hikers and led to an unofficial footpath in the woods. Known as the Indian Staircase, this three-quarter-mile detour off the long, winding Sheltowee Trace trail leads to a horseshoe-shaped rock whose top looks unaccessible at first glance. However, after closer examination, a smooth, slabby monolith turns into a staircase to the sky. While this may seem intimidating, it can be tackled, even with heavy packs. Look for the divots in the rock (that’s where the Indian Staircase got its name) and climb with four points of contact to gain the top of the rock wall. The exposure and bushwhacking turn this challenging hike into a dangerous scramble.

While this trail may not seem like a challenge (the first observation platform is less than a mile from the parking lot), the tallest cascading waterfall east of the Mississippi has a lure that kills. Go off-trail, scrambling across the waterfall, and you could slip, falling hundreds of feet to a watery grave. Waterfalls are among some of the biggest killers of hikers visiting the backcountry in the east, and Crabtree has been an especially harrowing place for hikers. 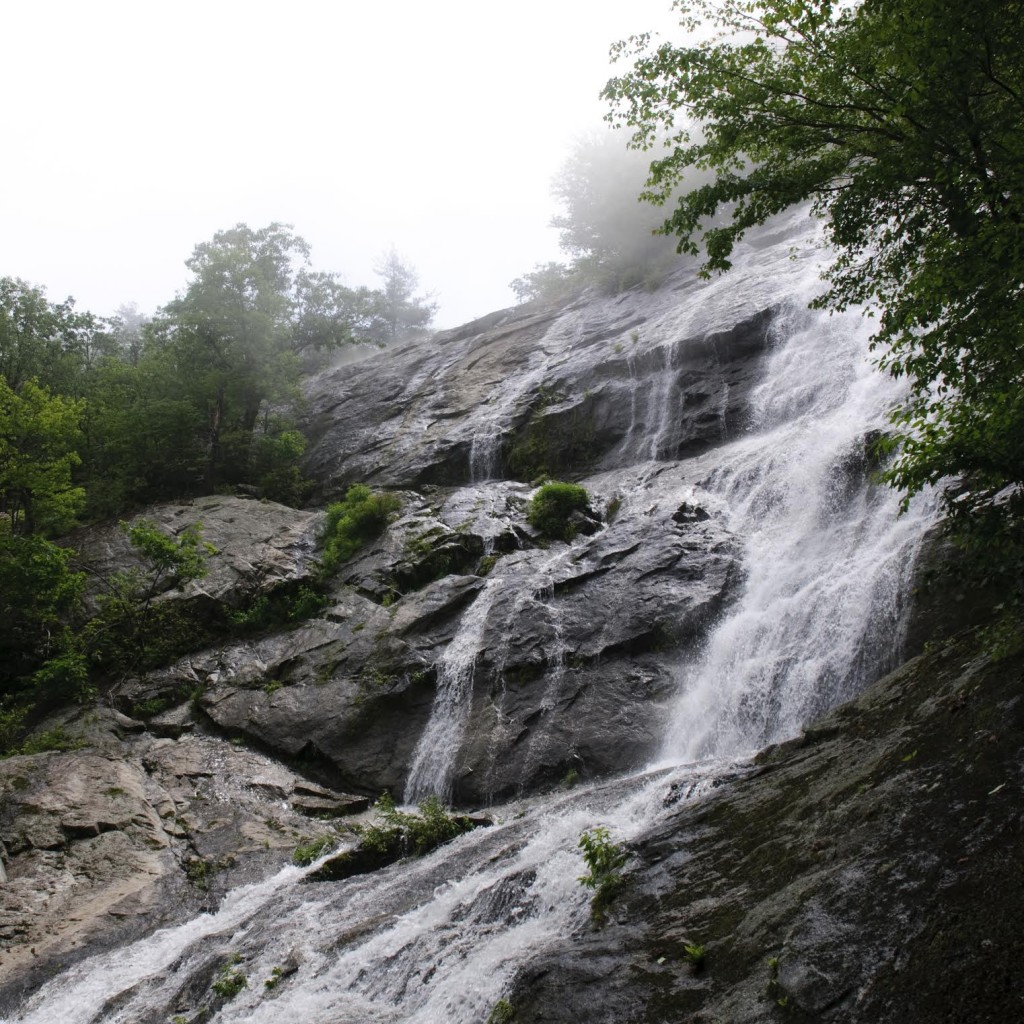 The seemingly easy trail up to the falls, for many seasoned hikers, can lead to overconfidence which grimly can lead to one misstep. Even more dangerous is the accessibility that leads inexperienced hikers to try their luck on the slick rocks. In recent years there have been numerous fatalities and injuries recorded at Crabtree Falls, including two deaths in 2015 alone, the most recent coming in late August. In June, a hiker fell 80 feet after taking just a few steps off the trail to get a closer look and a better picture of the cascades.