HikingFinding My Way (without GPS)

Finding My Way (without GPS)

The sun was setting over the Gulf Coast. I sat with Cliff, a tanned Hawaiian turned Floridian, before a licking fire at a beach campsite in Everglades National Park. The Everglades offers hundreds of miles of canoe and kayak routes, and is a favorite winter destination for backcountry paddlers. Also known as the Mangrove Maze, the Everglades presents paddlers with navigational challenges with names like Ten Thousand Islands, The Labyrinth, and The Nightmare. Paddling here can be tough, GPS or not, due to winds, tides and a more-alike-than-not paddlescape.

I should know. I wrote A Paddler’s Guide to Everglades National Park, penning the first edition in pre-GPS days, and the second edition after navigating the Glades by map and compass had become archaic. 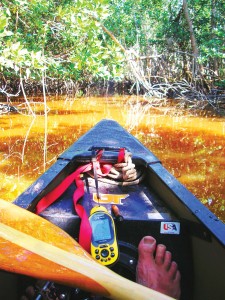 I could’ve used a GPS a time or two in those early days. It was midnight on the Joe River. I arose at midnight in order to catch a favorable tide that would take me back to the put-in. The moonlit night was dead calm. I traced the Joe River south with the tide, my stroking blade making the only sounds as it cut through the water.

Then I took a wrong turn.

I canoed into a vein-like network of creeks, eventually realizing this wasn’t the Joe River anymore. I stopped, and sat still in the canoe. The mosquitoes took the opportunity, draining me into paddling like mad into the aquatic jumble. Despite my bug-inspired haste I found the Joe River and was on my way.

That wouldn’t have happened with a GPS.

The GPS has brought paddlers like Cliff to the Everglades. He couldn’t comprehend navigating the Glades without a GPS. Navigation existed before GPS and Google Earth. Mariners once used the sun, stars and sextants to find their way. Later came map and compass navigation, where you orient the appropriate map north with the compass, match the horizon with the map and away you went.

What if Cliff’s GPS had fallen off his sea kayak? What if his GPS batteries died? What then, Cliff?

No doubt, GPS make navigation of the Everglades much easier. You can simply download nautical charts onto your device, then satellites circling planet Earth show your exact position in the park. Same goes for our Southern Appalachian Mountains. Or anywhere for that matter. A GPS gives novices an edge and a comforting reassurance of a known and exact position.