MagazineApril 2014The Only Roof Over The A.T.: Mountain Crossings, Winton Porter, and the...

The Only Roof Over The A.T.: Mountain Crossings, Winton Porter, and the next chapter

Over the course of its 2,178 winding miles, the Appalachian Trail passes only once under a manmade structure: a five-foot long, roofed breezeway belonging to what is now the Mountain Crossings store and hostel.

It’s located about 31 miles from the A.T.’s southern terminus, overlooking Georgia’s Neels Gap. From the first adventurous spirit to conquer the A.T.—Earl Shaffer, aka Crazy #1, in 1948—to the nearly 2,000 hikers following in his footsteps every year since, they’ve all passed through the Mountain Crossings breezeway. Serving as the first official mail drop, hostel, supply-station, and, therefore, crisis management center for would-be northbound thru-hikers, with its staff of authentic, 100K-plus-trail-miles-under-their-belt gurus,  Mountain Crossings has become not only a thriving boutique retailer, but a haven for an entire subculture.

But how, you might ask, was this cult established? Enter Winton Porter, a man whose tiny, miles-from-nowhere store doing over $850,000 in business in 2010, was dubbed by Inc. Magazine: “The smartest businessman on the Appalachian Trail.”

By age 8, whenever the weather was even mildly cooperative, Porter and his father were hitting the woods, weekending in campgrounds all over Georgia. By 9, Porter had trekked the state’s entire 76.4-mile stretch of Appalachian Trail. As a college student, he founded his own business: B. Bumblefoot & Company. “I drove around in my Toyota Tercel,” Porter chuckles, “selling [hand-carved, wooden] hiking sticks out of the back of my car.” Post-graduation, in 1989, Porter finagled a position with outdoor retail behemoth REI, where he commenced to speed-climb the corporate ladder. A decade later found him running an Atlanta-based store for the company that would eventually become Dick’s Sporting Goods.

However, despite this resume of success, disillusionment set in.

Then something happened: “In 2001 the opportunity train starts riding by and I jumped on,” he said.

For Porter, this entailed: 1) a resignation letter stating, “My dream begins now.” And, 2) cashing in the 401k, ravaging the savings, selling the house in Atlanta, packing his wife and daughter into a U-Haul, and buying Mountain Crossings.

In the thirteen years following this mammoth, game-changer of a decision, Porter earned a reputation as a “backpack-purging, tent-selling, hostel-running, first-aid-dispensing, lost-kid finding, argument-settling, romance-fixing, chili-making shopkeeper.” In 2010, he was named Georgia Author of the Year for his memoir, Just Passin’ Thru. And meanwhile, in the process, Mountain Crossings was becoming what Porter describes as a “place to recharge the soul, a place to be understood when other people think that adventures into the woods is madness, insanity.”

To get an idea of how this philosophy translates into practice, consider Mountain Crossings’ signature service: The Shakedown.

By the time northbound thru-hikers reach Mountain Crossings, they’ve trekked 30 miles, and, for whatever reason—say, bad shoes and an 80-plus pound pack—many arrive in crisis.

Thus it is that, each year, like a crew of motley superheroes, the Mountain Crossings staff swoops in, sifting through hundreds of backpacks, helping hikers cut 9,000 pounds of unnecessary weight. The sessions typically net about 12.5 pounds in trimmed excess, and require 1-4 hours to complete.

“Spend that much time with a customer and you’d get reprimanded or fired at most stores,” says Porter. “For us, it creates tremendous loyalty.”

With something like 200 photos of former customers poised atop Katahdin scotch-taped to the walls, it’s a point well made.

Eulogies and the Newest Chapter 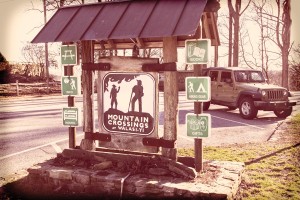 In 2009, like many somewhat recent college graduates, Georganna Morton and Logan Seamon found themselves putting in time at jobs they couldn’t stand.

“We had to do something different,” Morton says, “but we didn’t know what exactly.”

So they sold everything they owned and hit the A.T. And, like every other northbound thru-hiker, they passed through Mountain Crossings, where they first met Winton Porter, got the shakedown, crashed at the hostel, and moved along.

Months later, after conquering Katahdin, the duo found themselves once more in limbo, faced with the question of “What now?” It was at this point Georganna more-or-less randomly attended an outdoor trade show with her father. While at the show, once again, she happened to run into Porter. After listening to a somewhat somber description of the couple’s search for a place to land, Winton offered Georganna, Logan, and their dog positions at Mountain Crossings.

“I said ‘I’ll have to think about it,’” recalls Georganna, laughing. “To which Winton replied, ‘No, you’ll be there on Friday.’ It was Tuesday. So I thought about it a second. Then I said, ‘But where will we live?’ Winton grinned: ‘We’ve got room at the store.’”

Four years later, in December of 2013, engaged, George and Logan offered to buy the store.

“There’d been other offers,” says Georganna, “but when we came to him, it was like family, it was a different matter entirely.”

In a YouTube farewell video, Porter explains the one move he never thought he’d make: “My time has come to walk on, to start a new chapter. In Georganna and Logan, the trail angels could not have brought a better team to carry on the essence and the flavor that makes this place so incredibly special to the thousands of those that pass through.”

So maybe it’s like Lumpy, a long-term Mountain Crossings employee, says: “It’s a cosmic force that draws people here. It just feels like all the cosmic tumblers come into place.”

And Porter? Well, there are rumors of the Caribbean, a second book. Regardless, like The Dude, undoubtedly, he will abide.