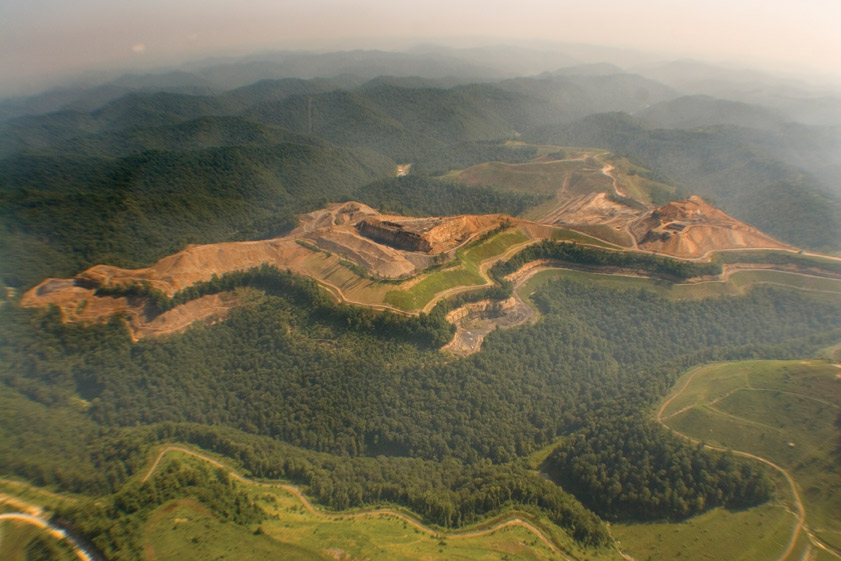 One Man’s Fight to Save His Creek, and His Life, with a New Vision for Rural Appalachia

Ricky Handshoe just wanted his own little slice of paradise.

At first, he thought he had found it—76 acres at the head of a picturesque valley in Northeastern Kentucky that seemed to have everything: verdant woodlands, rolling hills, abundant wildlife, and Raccoon Creek, which burbles from a hillside on the property and eventually flows into the 29-mile-long Big Sandy River, a tributary of the Ohio River. For years, the 56-year-old retired radio technician for the Kentucky State Police and his daughter basked in the singular beauty and tranquility of the Appalachian countryside.

The trouble started when a coal company carved a strip mine into the earth a few miles from his property. Shortly thereafter, in 2012, he and his daughter noticed soccer ball-sized piles of foam drifting in formerly pristine Raccoon Creek and another nameless Ohio River tributary that also coursed through the property. Then the neighbor’s chickens got sick, and wildlife—fish, frogs, deer—began to perish.

Handshoe and his daughter were concerned but didn’t stop drinking their tap water—that is, until their bodies began to deteriorate. First came the rash on Handshoe’s legs and arms, followed by deformed fingernails that twisted his digits into knots. His daughter, who was 21 at the time, started losing her hair, and Handshoe was beset by multiple kidney infections and constant fatigue.

The doctors initially didn’t have a clue. “No one knew how sick we were,” he says. “Then we started realizing what was in the water. It was the shiniest water I’d ever seen in my life. When the sun beat down, it was like a mirror.” Subsequent tests revealed that the streams on his property that used to provide clean drinking water and hours of carefree recreation were now loaded with arsenic, beryllium, aluminum, manganese, and other toxins from the mine.

“Growing up there, you could actually drink from Raccoon Creek right out of the mountain,” he says. “Now you can’t. We saw that creek completely destroyed.” Worse, the pollution’s effects cascaded down the valley. Much of the deer and other wildlife fled, the birds fell silent, and an eerie stillness descended. The plants and animals that remained became inedible. Most important, Handshoe’s tap water was no longer potable because the water in Raccoon Creek, which periodically ran an iridescent orange, indirectly fed the intake for a municipal water system that serves him and more than 6,000 others in two counties. In short, the mine had contaminated the landscape to such an extent that Handshoe’s doctor told him to leave immediately, forever. So he and his daughter packed up their belongings and abandoned the family homestead they loved.

It’s been about a year now, and in some ways, things are looking up; Handshoe is mostly off his meds, and his daughter’s hair has grown back. But the emotional scars, the sense of powerlessness in the face of a deep-pocketed coal company and seemingly apathetic government authorities, remain. According to Handshoe, both the Kentucky Department for Environmental Protection and the federal Environmental Protection Agency have tested the water and know exactly what happened, but did nothing.

“The state ought to be ashamed of themselves because they let our health go downhill, and they knew it,” he says. “I tried everything I could to save that place. I challenged permits, I protested. But they still let them mine.”

And then there’s the small problem of where to live. Handshoe still owns the uninhabitable property, which is now worth approximately nothing. “Who’s going to buy it?” he asks. “I’ve got to tell them about the pollution because if I don’t, it’s like putting a gun to their head. I’m not going to do that.” But without proceeds from a sale, buying a new home will be difficult at best.

Handshoe and his daughter weren’t the only ones affected. Three of his former neighbors also suffered kidney infections and other maladies at roughly the same time. “People living in that valley downstream are getting scared,” he says. “They’re drinking this stuff, and the state knows about it and won’t stop it. What a commercial for Kentucky: ‘Come and hunt the biggest elk east of the Mississippi, but sure as hell don’t eat them.’”

Handshoe’s experience is not an isolated one. All over Appalachia, people by the tens of thousands have essentially developing-nation-level access to clean drinking water, and pollutants leaching from coal mines are a major (although not the only) culprit. Eric Chance, water quality specialist for Appalachian Voices, says underground mines are often located directly in the water table. Arguably even worse are surface mines, which require blowing up mountains to expose coal, along with rocks that contain toxic heavy metals and salts. These unavoidably end up in rivers and other sources of drinking water. Once consumed, they can wreak havoc on the body, causing cancer, central and peripheral nervous system defects, circulatory problems, and kidney disease, among other ailments.

Then there’s coal slurry, a waste product from cleaning coal, which Chance points out is loaded with “all sorts of nasty chemicals” and is often stored in large surface ponds where it can seep into groundwater. Likewise coal ash, a byproduct of burning coal, can escape from containment areas and befoul wells and streams.

Although virtually everyone agrees that contaminants from coal mines are bad for human health, rigorously proving cause and effect is problematic. Perhaps that’s why the Environmental Protection Agency and its state equivalents have yet to regulate a variety of chemicals that no sensible person would consume in any quantity. “The EPA sets standards for drinking water, but they’re pretty behind the times because they have to do a bunch of studies to determine safe levels for every chemical,” Chance says, “People are inventing new chemicals much too fast for the EPA to keep up.”

So what can be done about a problem this seemingly intractable? Appalachian Voices, Kentuckians for the Commonwealth, and other groups have sued to enforce existing laws like the federal Clean Water Act, which they say coal companies routinely flout. And Chance says everyone can make a difference by getting involved. Support environmental groups that are fighting the good fight. Challenge mining permits on environmental grounds, procedural grounds, whatever works. Lean on regulators to enforce water pollution laws and develop stricter limits on pollutants. Tell members of Congress to support the Clean Water Protection Act, which would substantially curtail mountaintop removal mining. In other words, stop complaining and do something positive.

Roy Silver, a professor of sociology at Southeastern Kentucky Community and Technical College, is leading by example. He’s trying to protect the water in his hometown of Benham and nearby Lynch, where he works. In both of these locales, six mines—two on the surface and four underground—threaten drinking water supplies. Silver and others aren’t taking this prospect lightly and have filed protests against the surface mine permit applications, the cause of which was not helped when, tragically, a giant boulder hurdled down from one of the surface mines and slammed into a house, crushing a three-year-old boy in his sleep.

These events, combined with a tanking coal market that currently makes some of the stuff economically unrecoverable, have so far kept the dogs at bay; one application has been withdrawn, and the rest are currently on hold or otherwise not being pursued. Of course, that could change if and when the coal market recovers. “The water is our most valuable resource,” says Silver. “We should do everything we can to protect it.”

Attorney Tim Belcher of Elkhorn City, Ky., agrees. He’s been working with a local nonprofit to promote tourism on the Russell Fork of the Big Sandy River, where the city sits. A whitewater park is in the works, a recent paddling clinic drew about 150 boaters, and there’s been a push to promote trail running races. “We’ve been trying to establish an economy ‘beyond coal’ for our community,” he says. “The more people we get in here to spend their money, the better. The locals understand that we can have a tourism-based economy that’s not based on coal, but we have to have good-quality water to keep that going.”

Belcher realizes that not every Appalachian town is blessed with Elkhorn City’s natural advantages, especially its location on a popular river. But he says even if other towns can’t base their entire economies on tourism, they can take steps in that direction.

“A lot of people will wait around for the federal government to come in with the big bucks, but they shouldn’t,” he says. “Just start with something. Every little thing you can do to make your community a better place to live and unique for visitors, that’s what you’ve got to do. It might require ten small projects before you can do something big.”

Belcher thinks taking local economies “beyond coal” is plausible in the long run, but it will require a paradigm shift. “Part of the issue is educating people and politicians, who all have been relying on coal severance tax funds,” he says. “That money’s going to dwindle. It didn’t redevelop our economy the way it’s supposed to. It’s a process of educating the leaders and citizens to see that certain things can be done.”

As for Handshoe, he’s been waging an all-out blitzkrieg to get someone in authority to care about the pollution in Raccoon Creek that’s mucking up everyone’s drinking water. In addition to inviting Kentucky Governor Steve Beshear to visit his property (which Beshear did in 2011), he sued the coal company responsible and hosted hundreds of tours of his property for journalists, state and federal officials, and others. He also tirelessly samples the water himself with the same type of equipment that state inspectors use, and reports what he finds—complete with photos of vile-looking liquid and copious notes.

Those reports appear to be falling on mostly deaf ears. When asked for comment, Dick Brown, a spokeman for the Kentucky Department for Natural Resources, would only say that after “investigating” the 59 complaints Handshoe has filed thus far, the department issued six notices of non-compliance to various coal companies. No mention of whether they’ve actually been fined or otherwise held to account besides having pieces of paper thrown at them, or even whether officials believe Handshoe’s story at all. Maybe someone keeps spilling orange Gatorade into the creek.

Handshoe is not willing to quit. In a lengthy case study he prepared for regulators and anyone else who would listen, he eloquently articulated a battle cry for a healthy community:

“I am often asked by public officials, ‘What is it that you people want?’ It’s not really that big a mystery. I want our water quality and mining laws to be enforced. I want public agencies and elected leaders to hold coal companies accountable and make them do everything possible to fix the problems they have caused. I want the health of my family and neighbors to be valued more than coal company profits. I want state and federal agencies to stop giving new mining permits in our mountains if they can’t prevent problems like what’s happened to my community. And I want elected officials to get serious about helping create a different economy in this region, one that doesn’t depend on destroying our land and water.”