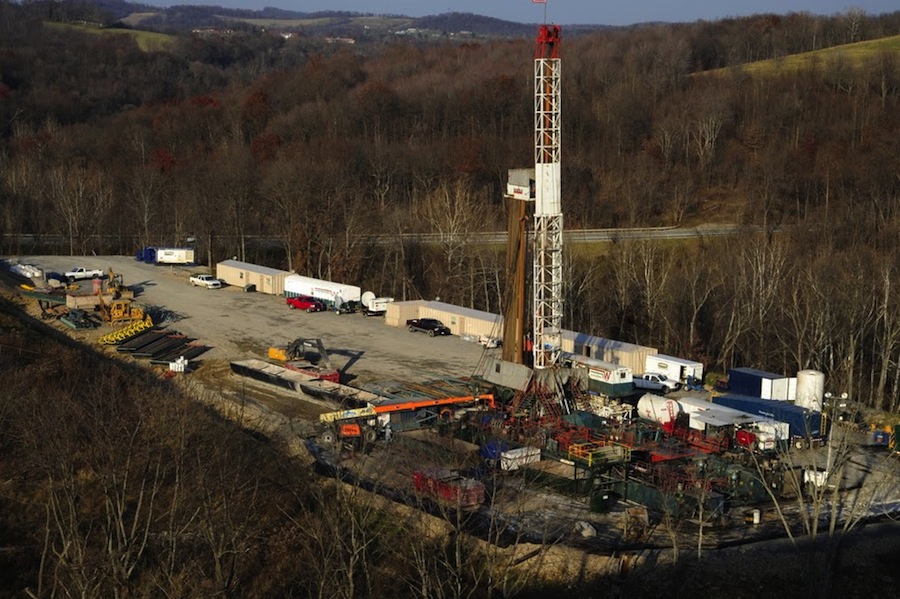 Fracking in North Carolina: There is No Planet B

What does a tomato grown in Little Sandy Mush, the Nantahala River and an Asheville brewer have in common? To thrive, each depends on the health of WNC waterways and aquifers. The food that grows in our rich soil, the icy rivers and unique commerce that draw so many tourists to this playground we call home, and future generations must motivate us as we take a close look at fracking — and what it means for Western North Carolina and the state as a whole.

If you’re new to the conversation, you might be feeling confused in the middle of what seems like a sudden uproar around fracking.

It’s a complicated process but at a basic level hydraulic fracturing, or, “fracking,” involves pumping water and sand along with a mixture of chemicals down a drill hole to extract natural gas or oil. Extremely high pressure from the pumping accelerates until the underground rock, already vulnerable from the initial drilling, fractures into many smaller fragments (like a bone shattering from impact). The cracks are propped open by the sand and sediment so that as extraction continues, more natural gas can be drawn from the site.

Rather than arguing for or against the industry, I aim to capture the heart-felt testimonies of those who stood up at the final public commentary period on September 12 to critique the proposed rules in draft 15A NCAC OFH regarding fracking in NC. These brave citizens faced three representatives from the Mining and Energy Commission (MEC) in the large purple and gold Ramsey Center of Western Carolina University. From politicians to professors, directors of non-profits to an advisor for American troops, speakers questioned why the people lacked a vote on an issue that in the words of WNC Alliance co-director Julie Mayfield would be a, “single use lock-up of shared land.”

Others questioned how a few commentary periods could be seen as sufficient after the motion to allow fracking was, “Ramroded through congress,” in the words of one. Another man asked, “Why is North Carolina rushing?” He cited the MEC’s claims that they had done exhaustive research, extensive review, and careful planning, yet it was only a few years ago in a 2010 study that fracking in NC was first brought to the table and a 2012 motion that legalized it, with many rules not available to the public until 2014.

Still, a belief in democracy is what empowered another speaker to call on her, “inalienable right” to speak up and her, “inalienable responsibility” to protect the land she and her family call home. Of the nearly 90 people who took the podium before the four hours ran out, 100 percent opposed fracking in North Carolina and called for much tighter regulations if it must happen at all. Many said that there is no safe way to frack and that the rules as currently written actually incentivize violations since proposed penalties are far less than the profits companies stand to gain by cutting corners. Cited in the criticisms were an increased risk of earthquakes (documented in some areas near fracking sites which previously had no reported seismic activity) and damaging the tourism industry.

Western North Carolina is in danger particularly, Elaine and Tom Robbins said, because of its unique topography and culture. The activist tag-team used their talking time to highlight the risks of fracking in a region prone to erosion. Elaine Robbins cited 11 major landslides that have shut down 1-40 since 1972 and hundreds of others that threaten farms, homes, and ecosystems each year. Because of flooding, she said, her land was running with over-flow from creeks, rivers, and streams for nearly three months last year. She and other speakers asked that all toxic fracking wastewater be contained and not injected back into underground wells. Disposal or storage in open-pits (which is currently allowed in draft rules) they said, should be banned completely.

One commentator pointed out that while states in some parts of the nation are experiencing droughts so severe that they are considering desalinization of ocean water, it is morally wrong to even think about pumping (on average) 3 million gallons of water into a well site that will be not only wasted, but will be rendered toxic by the process.

Perhaps the most shocking stipulation of the draft rules is that it is illegal for anyone to reveal the chemicals that are used in the fracking injection fluids. This means, as one speaker pointed out, that, “A fire chief could face up to four months in prison if he told his crew the chemicals they were dealing with in the event of an accident.” In response to fears about the volatile components, James Womack of the MEC was quoted at another hearing saying, “Most of the chemicals are things you could find under your kitchen sink.” Thankfully, Donna Dupree of Jackson County who has a background in biochemistry from Baylor College of Medicine and worked as an EMT, pointed out to Womack, “We don’t drink or deliberately inhale the chemical under our sinks.”

One of the most moving testimonies came from a long time resident of Murphy, NC, who said he’d been, “reared in Cherokee County public schools.” He reported that after, “heeding the call of duty,” as a young man, he found himself at Camp Lejeune as a U.S. Marine. “Forty-one years later,” he said, “It caught up with me as a diagnosis of leukemia.” For decades soldiers were exposed to water at the camp poisoned by chemical solvents, but it took years to find the contamination and establish a link between it and the health effects many veterans and their families experienced. Speaking to the unknown effects of chemicals in the drinking water, “How many years,” he asked gravely, “before it shows up in you?”

If you’re wondering how anyone could think it’s a good idea to shatter the foundation that our homes and infrastructure rely on for thousands of miles from a drill site, the answer from proponents is “job creation,” and “homeland security.” These tag lines may hit us where we are vulnerable, but as Louise Heath of the Cherokee Nation pointed out, “There are no jobs on a dead planet.” As to homeland security, speakers cited policy makers who were favoring “short-term gains,” over permanent degradation of our water supply, tourism industry, and ecosystems. “Western Carolina,” said one speaker, “Is the most biodiverse region of the US and draws tourists to the natural beauty of places like Joyce Kilmer National Forest in Swain County.” She elaborated on how fracking would threaten the viability of the tourism industry and the survival of many species due to noise pollution, constant road-traffic and air and water contamination.

A speaker who grew up in Eastern Kentucky where fracking has been going on for years pointed out that, “If what they are promising were true, Eastern Kentucky should be wealthy and full of jobs.”

Investment in the cleanest forms of energy available is the only way to get at the heart of the issue and truly make the East Coast energy independent, speakers said. Renewable energy, specifically solar, would create jobs and economic gains that would not be lost when companies exhausted resources and left town.

Students in their first semester at WCU to elders born in these hills spoke from their souls, drawing from solid evidence and research, deeply held faith and pride in our democratic system. “We love this place so much,” confessed Krista Slavik, leaning over the podium towards representatives from the MEC. Slavik who came in a 15 passenger van with other activists from Asheville was one of the last to speak.

The many political candidates and incumbents who spoke said that the only way to protect ourselves from misrepresentation of the kind that allowed fracking exploration to be funded by tax-payer dollars is by speaking with our votes. From Mayor Nick Breedlove of Sylva, to Tom Hill, a retired aerospace physicist running for the House of Representatives, and others like Jane Hipps, candidate for State Senate, all urged citizens to research the stance of political candidates in their districts and own the power of their vote.

You can read the the proposed rules regarding fracking on lands in NC that could include Pisgah and Nantahala National Forest here.

The MEC is accepting comments on these draft rules until September 30th, so if you’ve used water today, if you love our precious mountain lands, please submit a comment and encourage others to do so. As one speaker reminded us, “This is it, there is no Planet B.”

Directions on how to submit electronic and written comments can be found at the bottom of the web page here.

Check out www.frackfreenc.org to learn more about the work of grassroots organizations who are mobilizing activists around the state.

Previous articleVirginia is for Adventure Lovers Giveaway
Next articleSeptember Quick Hits: News from the Blue Ridge and Beyond
Advertisment