MagazineDecember 2014Wander the Kitchens and Fields of Barbara Kingsolver

Wander the Kitchens and Fields of Barbara Kingsolver

On the outskirts of Abingdon, Va., lies the most dedicated farm-to-table restaurant in the South.

Founded by Barbara Kingsolver and her husband Steven Hopp, Harvest Table sources its food less than two miles from its sister farm—yes, that farm — the one featured in Animal, Vegetable, Miracle. Harvest Table also works with over 50 local farmers to meet additional needs and demands, and in so doing, slashes its carbon footprint while securing the freshest, most delectable produce available.

All of that produce ends up in the hands of culinary wizard Phillip Newton. In a 2011 New York Times review, Newton’s menu of year-round seasonal, regional cuisine was described as being so good it would “make Harvest Table an instant hit in a progressive, urban enclave like Brooklyn or Berkeley, California.”

“Harvest Table is, at heart, the outgrowth of Animal, Vegetable, Miracle,” says Hopp, professor of environmental studies at Emory & Henry College.  “It’s sold over a million copies and more-or-less subsidizes the restaurant.”

In 2005, Hopp, Kingsolver, and their family (daughters Camille and Lily) engaged in a somewhat radical experiment. Sick of the artificial and unsustainable lifestyle inherent to living in that manmade, oasis-in-the-heart-of-the-desert behemoth, Tucson, Arizona, and wooed by the promise of a wholesome, country life, the family cut out for Hopp’s Blue Ridge Mountain homestead. Nestled in the backwoods of rural southwestern Virginia, the property would provide the family with a means of getting back into the flow of seasons and reconnecting with that great and often overlooked sustainer of life, the land. 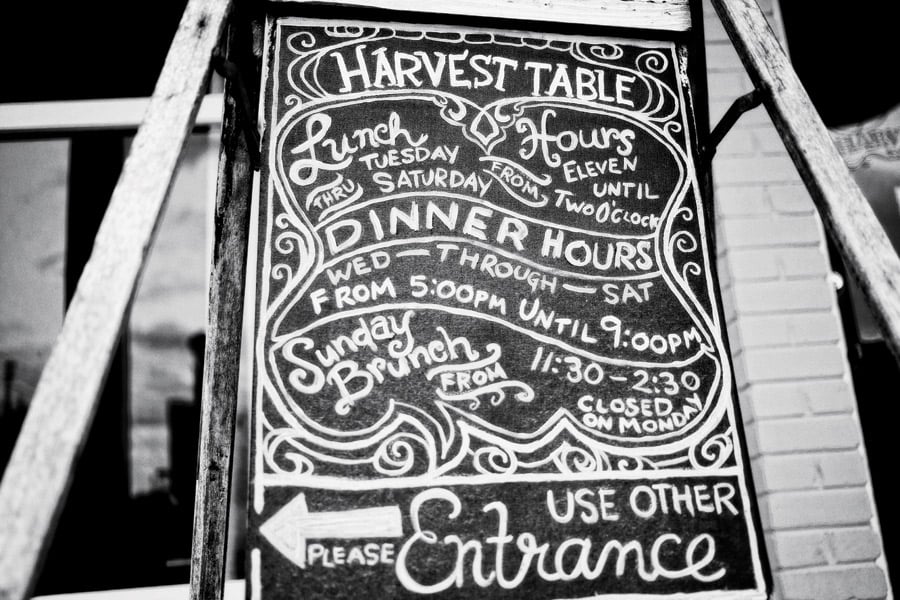 Over the course of the ensuing year, Hopp and Kingsolver vowed to grow as much of their own food as possible. Could they live completely from what they could grow or buy locally at the farmer’s market? Each family member was granted a free-pass, non-local selection for the year. Steven, for instance, opted for fair-trade, organic coffee. But for everything else, the family would eat locally and seasonally. The resulting experience was so fundamentally game-changing that Kingsolver and Hopp were compelled to craft a book: 2007’s wildly successful New York Times bestseller, Animal, Vegetable, Miracle, a nonfiction mash-up consisting of memoir, food writing, science-backed environmental and agricultural poliitics.

Buoyed by the success of the book, Hopp decided to up the ante. Why not carry the dine-locally-by-the-seasons experiment a giant’s step further? Thus, Harvest Table was born.

“We’re looking to find a way to bolster the local economy and, in so doing, foster community,” says Hopp. “This is traditionally a farming region, but, in order to make a substantive living, these small, family farmers require a new model. That’s what we’re hoping this restaurant can help provide.”

Much of the restaurant’s produce is grown at the Kingsolver-Hopp family farm, a 4.5-acre homestead positioned on a mildly sloping hillside. Sam Eubanks, an App State graduate in agro ecology and sustainable development, manages the farm’s operations.

“Here we utilize every square inch of what is, acreage wise, a fairly small tract of land,” says Eubanks. Freshly returned from the town-over farmers’ market, she was wearing a pair of colorful, patchwork overalls and handmade, locally crafted earrings. She pointed out rows of vegetation contoured across the hillside to check erosion and maximize planting space. Hoop houses were chock full of staked, vertically grown heirloom tomatoes. Equipment barns doubled as curing facilities for garlic, onions, and potatoes.

While the farm is gunning for ultra-premium efficiency, it is also seeking to create an ecosystem. Take, for example, the beneficial insects garden, marked by a hand-painted sign flanking an array of brightly flowering, dazzlingly colored shrubs and bushes. “Aren’t you supposed to be growing food?” I asked.

“That garden helps the food grow,” said Eubanks. “Not only do those flowers bring in bees and other insects to pollinate the crops, they also attract insects that eat pests instead of the produce.”

That same symbiosis is at work in the restaurant, where Eubanks and 50 other local farmers work closely with chef Phillip Newton. A big man with broad shoulders, dark eyes, and a salt-and-pepper streaked goatee, Newton explains that Eubanks is “constantly updating me on what’s happening on the front lines—who’s got what coming in, when it’ll be available, what to expect next week.”

Prior to each season’s planting, Newton and Eubanks plan what and how much of each particular crop they’ll be growing at the farm. Then Eubanks begins contacting other local farmers to determine who can fill the gaps.

“We want to serve as an example for the present, but also create a model for the future, when the system of transporting vast quantities of produce thousands and thousands of miles isn’t possible anymore,” says Eubanks.