Woman completes Triple Crown of hiking in a single year

When Heather “Anish” Anderson’s boots touched the ground in Grants, New Mexico this November, it marked the first time a woman had completed the triple crown of hiking in a year. In just over 8 months and nearly 8,000 miles, Anderson walked the Appalachian Trail, Pacific Crest Trail and Continental Divide Trail in a single calendar year. No stranger to hiking, Anderson is a three-time triple crowner and holds the self-supported thru-hike speed record on the Pacific Crest Trail, completing the 2,650-mile hike in 60 days.

Daniel Romanchuk won the New York City Marathon’s wheelchair race in early November, and in doing so became the first American to top the field in the event’s 18-year existence. Just 20 years old, Romanchuk won with a time of 1 hour, 36 minutes, 21 seconds, besting second-place finisher and three-time New York winner Marcel Hug of Switzerland by 1.15 seconds. Romanchuk, who’s originally from Mt. Airy, Md., but now trains and goes to school in Illinois, was born with spina bifida and has been paralyzed from the waist down since he was 3. Impressively, the rising star also won the Chicago Marathon about a month earlier on October 7 and placed third at the London Marathon last April. 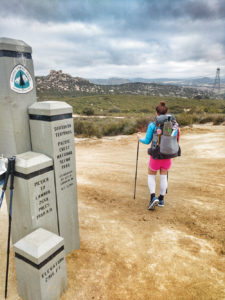 Alyssa Godesky, a professional triathlete from Charlottesville, Va., set a new record for the fastest known completion of Vermont’s Long Trail in late October. Godesky covered the entire 273-mile trail in 5 days, 2 hours,  and 37 minutes, topping a record set in 2012 by ultrarunner Nikki Kimball by more than five hours. Although she’s completed more than 30 Ironman Triathlons and 50 marathons or ultras, Godesky trained even harder for the Long Trail’s steep, technical terrain. “I put myself in a position I’ve never been in before, and it opened up new avenues,” she told ESPN. With a dedicated support crew, Godesky had someone with her on the trail at all times, which particularly helped during a 72-mile push on the adventure’s final day. She only slept approximately 17 hours during the record-breaking hike of America’s oldest long-distance trail.

Black Bear Populations are on the Rise

Last year there were steady reports of interactions between humans and black bears across the Appalachians, suggesting an increase in bear populations in the region. Now a cross-state effort is underway to tally the number of bears in the South. The Tennessee Wildlife Resources Agency is currently partnering with agencies in Georgia, Kentucky, North Carolina, and South Carolina to conduct a study that provides an estimate of the region’s bear population. Virginia currently has around 18,000 bears, an increase of 2,000 since 2016.

Number of acres the West Virginia Land Trust is hoping to turn into Yellow Creek Preserve. The potentially preserved tract in Tucker County is bordered by both the Canaan Valley Wildlife Refuge and the Little Canaan Wildlife Management Area and holds Moon Rocks, a coveted mountain biking destination with a challenging stretch of technical singletrack. Currently owned by the Vandalia Heritage Foundation, the land is facing possible development, so the land trust is attempting to raise $500,000 to keep it open to the public.
Pitch in: BuytheMoonWV.org.

A new study in the Journal of Applied Physiology found that muscles of older exercisers had as many capillaries and enzymes as those of people 30 years younger. Though the active group of older people did have lower aerobic capacities than younger people, their capacities were still about 40 percent higher than their inactive peers.

The Trump Administration has approved oil and gas surveying in the Atlantic Ocean using seismic blasts. Sounds from these blasts can travel up to 2,000 miles through the water and they are often deadly for sea turtles, dolphins, and the endangered North Atlantic right whale. Many Southeastern governors, mayors, and leaders also oppose the offshore oil surveying and drilling plan due to its impacts on both commercial fishing and coastal tourism.