In the Crosshairs: Another Endangered Red Wolf Shot

An endangered red wolf was shot and killed just before Christmas in North Carolina’s Pocosin Lakes National Wildlife Refuge. The U.S. Fish & Wildlife Service and a coalition of conservation groups are offering a reward of $16,500 for any information leading to arrest.

Only 45 red wolves remain in the wild, and they all live in a protected area in eastern North Carolina.

“This loss is a huge blow to the species,” says Defender of Wildlife program director Ben Prater. “The poaching of any wild animal is intolerable, but the intentional killing of one of the world’s most endangered species is inexcusable.”

Once a top predator throughout the Southeastern United States, the red wolf almost vanished 50 years ago. After being named an endangered species, a captive breeding program began in 1973. As the captive population grew, scientists considered where the red wolf could be reintroduced. 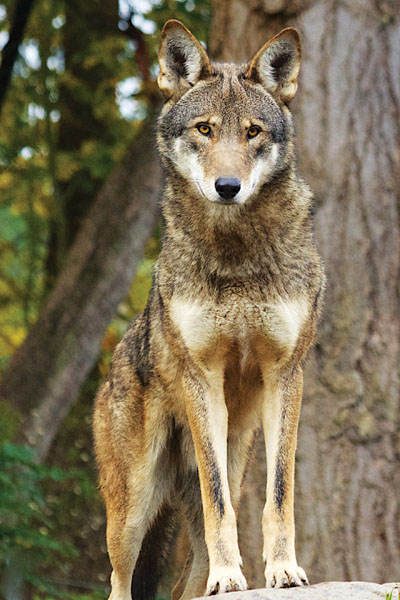 In 1987, six pairs of wolves were released in the Alligator River National Wildlife Refuge located within a five-county region—Beaufort, Dare, Tyrrell, Hyde and Washington—of eastern North Carolina. Those 1.7 million refuge acres are now home to the only wild population of red wolves in the world, managed for the last 29 years by the U.S. Fish & Wildlife Service’s Red Wolf Recovery Program. Until recently, it has been one of the most successful wildlife recovery programs in the country’s history.

But today, both the program and the wild red wolf face possible extinction once more. In the last few years, the wild population has decreased from over 120 wolves to 45— mainly due to shotgun mortality. Red wolves can resemble coyotes—especially at night—and a handful of local landowners have balked at hunting restrictions to protect red wolves. At the request of the North Carolina Wildlife Resources Commission and pro-hunting landowners, the U.S. Fish & Wildlife Service has effectively ended the red wolf reintroduction and adaptive management program.

One long-term solution, Prater says, lies in monetary incentives for landowners. A similar program was recently launched in Florida to protect the endangered panther and has seen early success. “Some type of incentive or payment plan—where landowners are compensated for every wolf pack they have or every acre of habitat they provide—it can work. It has worked elsewhere. We just need to start these conversations.”

Meanwhile, authorities are seeking any information related to the December 21 red wolf shooting. Defenders of Wildlife, Center for Biological Diversity, Animal Welfare Institute, and the Red Wolf Coalition have partnered to offer a reward of $16,500 for information leading to an arrest. Contact the U.S. Fish & Wildlife Service with any leads at 252-473-1131.