In Search of the Morel: Stalking an Elusive Wild Mushroom

All summer long my husband and I feast on wild mushrooms I gather by the basketful. We’ve eaten brown, coral, yellow, orange, green, lilac and even blue mushrooms—a veritable rainbow of fungi. We’ve partaken of chanterelles, horn-of-plenty, boletes, sulphur shelf, beefsteak, chicken-of-the woods, and lion’s mane mushrooms, all so gorgeous and so delectable that they put their grocery store cousins to shame. Cellophane wrapped button mushrooms are as different to wild mushrooms as store-bought tomatoes are to those picked out of your own garden. It’s like eating at Taco Bell once you’ve dined on the real thing in Mexico.

Yet the morel, the one wild mushroom that everyone seeks and many find, had always eluded me. It is among the first of the edible mushrooms to appear in the spring, often in abundance, and still I’d never come across them. Last spring in particular was a better-than-average morel year. My husband and I found a whole bag of morels yesterday, one acquaintance bragged. Facebook posts showed friends and friends of friends smiling down at tables full of the wrinkly wonders.

I’d kept my eyes open in the past. I’d studied the habitat requirements noted in my guidebooks and scoured the woods looking in all the right places, but nothing. Nada. Goose egg. It galled me.

I queried people who bragged about their finds, and received much advice. Look in old apple orchards, said one. Under poplar trees, said another. Find the May-apples and look near those, my cousin advised. They’re near creeks, in low-lying places, a business colleague said. Higher up, said a friend. Under the May-apple, but not the running cedar, a woman told me. Never the running cedar.

The early May morning dawned clear and cool, birds singing, wind chimes tinkling. Spring was drawing to a close. It was now or never, at least until next year. With nothing scheduled until afternoon, I pulled on my sweatshirt and old pants, grabbed my cloth bag and a knife, and set out. “I’m off to find morels,” I called to Kevin. Tem, our trusty hound dog, leapt with excitement. 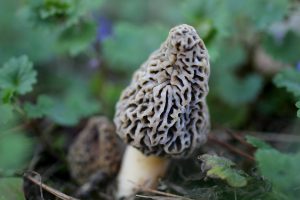 I started out on our property, for which I had low hopes. All twenty-four acres are covered with running cedar which, rumor had it, was no friend to the morel. Finding none, I ambled down the creek as it crossed onto my neighbor’s land, the morel foremost on my mind.

One hour passed, and then another but no mushrooms. There were wildflowers aplenty—Virginia bluebells, phlox, showy orchis, the elfin umbrellas of the May-apple. The last of the Dutchman’s britches —their little white pantaloons my childhood delight— and the first of the wild azaleas (pinksters, as the old timers call them) whose delicate fragrance caught my attention before I spotted them. The leaves of the trout lily, speckled like their namesake, sat naked in the woods, their flowers already come and gone. The strange maroon blossoms of the pawpaw tree foretold a sweet and luscious September.

Twice I came across turtles overturned in the middle of the wood— one shell long since bleached white, while another still carried the stench of death. Something must have flipped them on their backs, lost interest and then padded away. Migratory songbirds had returned in full voice, the red-eyed vireo and the ovenbird with their repetitive chants competing for airtime nearby. The hammering of a pileated woodpecker reverberated through the woods farther away. I heard the report of a real hammer across the river, someone repairing a roof or building something on this fine day. Barry Lopez calls this the philosophy of hand tools. I felt grateful to live among so many philosophers.

I like cutting and splitting my own firewood. I feel most in harmony in places where I can procure my own food within walking distance of my house. I like knowing I can kill and clean a deer or a fish. I like the satisfaction of cooking a meal over an open fire. I prefer to collect wild mushrooms for nothing but the price of a few scratches on my legs.

Most of the landowners along the way were people I know. The ones who live here had given me permission to hunt mushrooms. Their biggest fear wasn’t so much that I’d find their secret stash, but that I’d sue them if I got sick eating a poisonous one. “You know what you’re doing?” they asked as though I’d strung a tight rope across Niagara Falls and was about to unicycle my way down the wire. Each time I offered to share whatever I found, they politely and firmly demurred—Nooooo, thank you!

As for the absentee landowners, I’d never asked permission for the simple reason that they were never around. Except for the one guy I’d introduced myself to as he graded the steep drive to the top of the mountain he recently purchased. I hinted around about wanting to hunt mushrooms on his property, and though he didn’t comment either way, by the very next weekend he’d erected a locked gate and posted NO TRESPASSING signs all along his road front.

By the time I worked my way down to the Tye River, I was trespassing my fool head off. But I was ready with my story if someone approached me. Just looking for my hound dog, I’d say, tucking my mushroom bag under my sweatshirt while employing Virginia’s legal excuse for entering someone else’s land. I even had Tem for proof.

The river still coursed, barely contained within its banks after the heavy downpours earlier in the week. Once the leaves were fully out, the water would rise and drop quickly after a rain as the trees pumped thousands of gallons of water vapor into the air, but until then a good deluge would keep the level high for a few days.

Tem ranged away, racing back to touch base periodically before disappearing again on his hound-dog pursuits. Later he took up with a pack of friendly beagles, who wiggled up and sniffed my hand, then bounded down a deer path, their bays trailing behind.

In spite of the wildflowers, the rarefied air of the day, and the sound of the rushing Tye, I carried a stone of bitterness that grew larger with each minute the morels eluded me. I am a forester after all, yet people far less competent in the woods were finding the things like there was no tomorrow. It shamed me. Entire symphonies have been written about springtime in the Appalachians, but here I was, eaten up with envy and failure. Now I knew how renowned ornithologists—those experts who spend their whole exotic vacations standing in roadside ditches for the chance to add a rare bird to their life lists—felt when some amateur spied one at a birdfeeder. It’s the journey, not the destination, some say. Well screw that. I was all about my destination: the pot of mushrooms at the end of the rainbow. 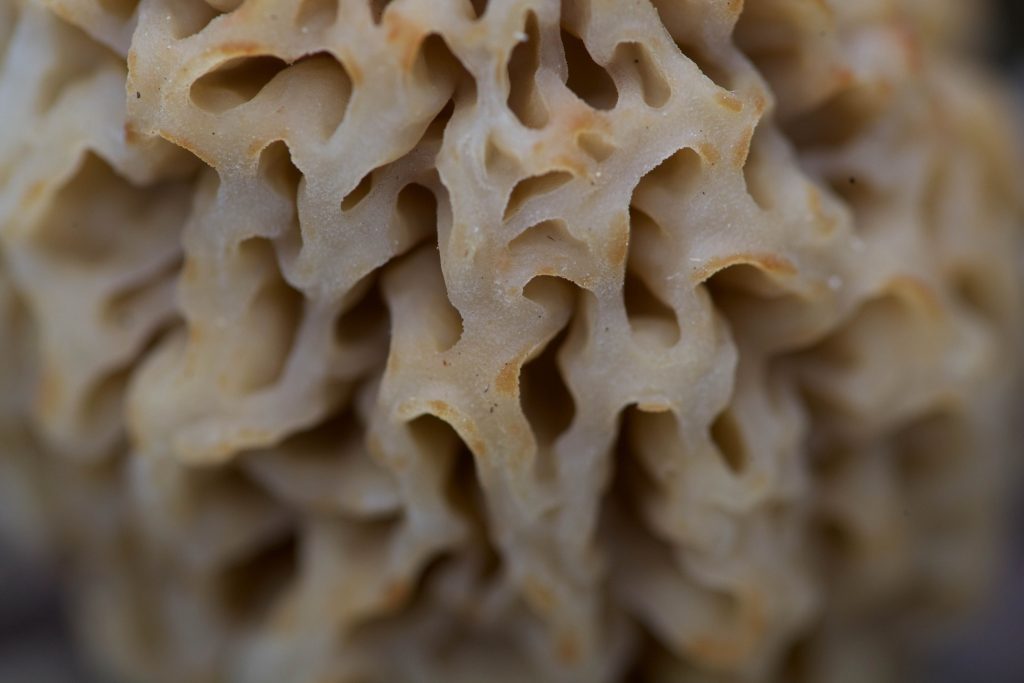 I tied my sweatshirt around my waist as the day warmed, and picked my way through the poplars and the May-apples along the river, eyes trained on the ground while the earthy fragrance of spring humus mingled with the scent of fresh water rapids pounding over nearby rocks. I squatted in the leaf litter, and stared, hoping the morels would reveal themselves much as stereogram pictures popped into 3-D relief when you looked at them long enough in just the right way. A few minutes of crouching like a tracker, and nothing. Still, I couldn’t give up because of the fear—no, the certainty—that the mother of all mother lodes lay just fifty feet beyond the point where I turned back.

Time to search at a higher elevation. I straightened slowly, pausing to massage my lower back muscles as I faced the hill.

There it sat, curving out of the side of the bank. A morel the size of my palm.

Oddly beautiful, its pale gold cap balanced atop a thick hollow stem the color of pallid flesh wrinkled much like my fingers and toes after a long hot bath. I stood frozen at first, as though it might disappear like a leprechaun if I glanced away. Then I scanned the ground nearby. There emerging from the leaves sat four others of its kind.

Of the mushrooms I’ve encountered, the morels are the most magical. Peeking out of the leaves in the dappled light of the forest floor, they appeared to glow from within like tiny lanterns shaped like wizard hats lighting the footpaths of woodland gnomes. I was charmed by them, utterly.

I remained still for a minute, two minutes, absorbing the details, soaking up the feel of their particular habitat. Then I harvested my discovery, tucking each of the fanciful mushrooms into my cloth bag before turning to spot several smaller ones nearby.

I couldn’t wipe the grin off my face; bliss had replaced my bitter stone. As I inched my way along the edge of the hill, I spied a morel here, another there. Some I gathered, older ones I left to spread their spores. And then they were gone as suddenly as they appeared, the patch played out. Or maybe the little wizards had stolen away.

No matter. I had my eye in now. If there were morels to be found in the future, I knew I could find them.

I was caught in the thrall of the wily morel, and would forever look toward spring. Tem trotted by my side as we walked back home with our mushroom bag, two hunter-gatherers at peace with the world.