They call it “canoe camping.” You paddle a distance, camp for the night, and paddle some more the next morning.

My plan: wake up early, pack and then paddle down the Catawba River.

What actually happened: woke up late, tossed some stuff in the car and paddled down the Catawba River.

American Rivers, an organization that works to protect rivers and streams, recently rated the Catawba River the fifth most endangered river in America. The number one threat to the river is contamination from coal-ash ponds. But that isn’t the only threat.

More on the threat of coal-ash ponds: The French Broad River Threatened By Toxic Waste

I wanted to do something other than read about the problems, so this past Sunday I put into the Catawba in McDowell County, North Carolina and paddled downstream. A 60% chance of rain should have persuaded me to stay home, but it didn’t. And I started to paddle, ignoring the thunderheads on the horizon.

I paddled a couple miles downstream and entered Lake James, the first of many man made lakes along the river. This particular lake is formed by three hydroelectric dams, all of which are owned by Duke Energy. The Catawba Riverkeeper Foundation recently filed Notice of Intent to Sue Duke Energy for illegal discharges of toxic waste into the Catawba, a river that starts in the mountains of Western North Carolina and flows 440 miles to the Atlantic, a river that provides water to millions of residents of both North and South Carolina.

As I was paddling into Lake James, a bass boat came roaring by, its driver warning me to “get in quick” because the storm was “blowing in off the mountain.” I couldn’t help but think about the storm brewing in the water beneath our boats. I told him I was on my way, but when it came time to turn left for the dock or right for more lake, I turned right.

Paddling flat water is lonely. You watch a point in the distance, wondering if it is getting smaller or larger, and it is hard to tell. You feel the strain in your arms, numb from the constant effort. Your mind wanders, thinking about the things you’ve done wrong and the things you’ve done right. But sometimes you have to let it go, and after four hours and 10 miles of paddling, I paddled into Lake James State Park and camped for the night.

It took me some time to put in the next morning. Old bones, soreness, one man breaking down a six man tent, gloomy skies — whatever the reason, I kept a slow pace. Even the water seemed lackadaisical, it had a lazy and thick undulation, like it suffered an emotional depression that was just too much to bear. But I stayed focused on the mechanics: two strokes on the left, two strokes on the right and onward.

An hour and a half and four miles later I reached the hydroelectric dam at the head of Lake James. The portage around the dam required three round trips, one mile each, and two hours after beginning the portage I put back into the river below Bridgewater Hydroelectric Dam in Burke County, North Carolina. 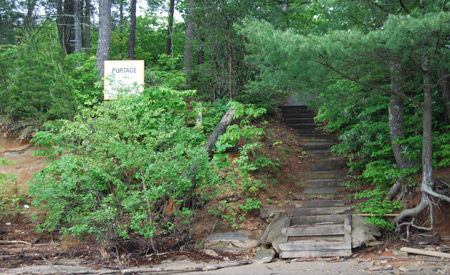 The dam releases water frequently, apparently to meet the demand for electricity during peak power times. The sirene indicating that water was being released sounded just as I finished the portage. And what first looked like a stream in a time of drought suddenly became a swollen river with a quick flow.

Most experienced paddlers would consider this section of the Catawba a lazy river ride, even with the released water, but the first set of waves I encountered spilled over the bow of my canoe, ruining my phone and camera. The rapids would be considered Class I, if that, and they were fun, although costly. Two hours and 7.5 miles later, after encountering several flat water sections with little flow, I arrived at the public access in Glen Alpine, Burke County, North Carolina. My canoe camping journey completed.

Along the way I saw a family of ducks, two deer in the middle of the river, a blue heron the size of a pterodactyl and several swimming groundhogs that I have been told are muskrats. In 24 hours I paddled 21.5 miles, and I endured three miles of portage. During my paddle, I thought about the river, and what I could do to help. I wondered if what I saw would remain for my children and for my grandchildren. I don’t have the answers, but I know the Catawba needs to stay where it is, I know it needs to stay healthy, and I hope we all care enough to make that happen.

Brian Plemmons is an outdoor enthusiast and a writer who paddles, climbs, hikes and bikes all across Western North Carolina.