Trailer Tuesday brings you the latest and most relevant outdoor movie trailers from around the web. Up first is CONGO – The Grand Inga Project:

CONGO – The Grand Inga Project is a full length feature documentary following world renowned whitewater kayaker Steve Fisher and his crew (Tyler Bradt, Rush Sturges, and Ben Marr) as they attempt to run the 50-mile Inga Rapids of the Congo River. The first attempt at Inga was in 1874, and had not been run until Fisher landed in Africa. As you can see from the trailer, the Congo River is no joke and flow at 1.6 million cubic feet per second (!). This film is equal parts kayaking action and historical doc, so it has a wide appeal. The film garnered the “Best Film” award at the X-Dance Film Festival in Salt Lake City and Fisher was named the 2012 Outside Magazine Adventurer of the Year.

As luck would have it, Fisher will be in Washington, D.C. on Thursday April 11, to present the film and talk about the expedition. The event is coming to the nation’s capital courtesy of DC Adventure Films and Active Nature and will include a raffle, discussion with Fisher, and or course, the film. One night, two showings at the Arlington Cinema & Draft House (my two favorite things in one place!?!?!)

This is a Red Bull joint, so you know the footage, production value, and story line will live up to the epic adventure shown. 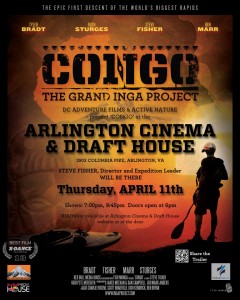 For Trailer and the full expedition story, visit: www.ingaproject.com
To purchase the Blu-Ray/DVD visit: www.fishmunga.com/store