RunningBoston Marathon Report: There Is No Finish Line

Boston Marathon Report: There Is No Finish Line

The finish line the day before the bombing.

The international Boston Marathon and joyous celebration of Patriot’s Day suddenly turned catastrophic at 2:50 p.m. on Monday. The fabled finish down Boylston St. dreadfully shifted from personal victories to a shocking war zone, with 3 deaths and over 200 innocent bystanders injured.

I was one of the fortunate ones. I finished nearly an hour before the blasts. I lingered around the finish-line station for thirty minutes while I rehydrated, recovered and waited for my wife, Candace. Once out of the family meeting station, we slowly walked a couple of blocks and stopped at a café to get off my feet and refuel my body. While walking back to our hotel, we heard the sirens of several EMS crews but didn’t pay much attention. As we entered our room and turned on the TV to view the final coverage, the traditional camera view of the finish line revealed a bizarre, unimaginable, and bloody scene. We were stunned.

I’ve been running marathons for 33 years. The last time I’d run Boston was in 1993, so I was excited to celebrate my 20-year Boston reunion with my wife at the 117th edition. The celebration included a nod to all my running companions, mentors, and family who have inspired me over the years. My quest was to run ‘26 miles for 26 pals’ and take the precious time to reflect on each of them as I ran from Hopkinton to Boston.

The plan worked perfectly as I navigated the historic course, negotiated the Newton Hills and finished strong down Boylston St. amid thousands of cheering spectators. I had set a conservative time goal – one to run a respectable time but also conserve my energy so that we could enjoy the historic sites surrounding Boston after the race. Mission accomplished. 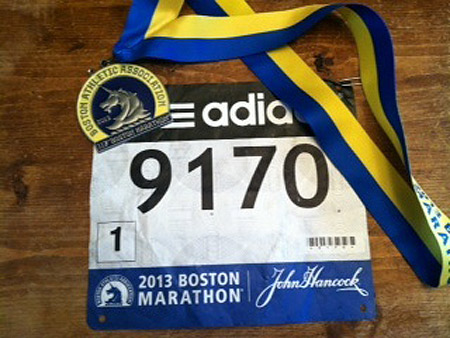 Then the explosions went off. Due to a horrific and cowardly act of terrorism, tragedy suspended the international event and approximately 5,742 competitors were diverted from the course then dispersed into various locations short of the historic finish line. Boston Police abruptly replaced Boston Athletic Association officials and volunteers monitoring the course in an attempt to maintain a safe and controlled environment surrounding the violent explosions that occurred along the finishing stretch on Boylston St.

The aftermath created an uncomfortable numbness and somber environment around Boston. Runners and their families appeared in shock. What should have been a festive occasion was now one of dazed and confused. News started trickling in and police bulletins warned citizens to stay at home, avoid congregating in large masses and announced transit system closings. Cell phones were erratic because of the high traffic. The FAA declared a temporary ground stop at Logan International Airport.  My wife and I continued to watch the raw, local footage recording in real time the emergency efforts of police, first responders, medical professionals, EMS, runners and volunteers.

Heightening the fear and confusion, a third event was reported at the JFK Presidential Library. A fire broke out at the library located miles away from the marathon explosions. My wife and I kept looking at each other trying to find comfort but instead, our eyes revealed terror and confusion.

Hours later, we went down to the hotel lobby. Runners and their families were gathered around. There was an uncomfortable cheerless about the room. Outside, downtown Boston was a ghost town, Boston Commons vacant. We walked a block. A bomb squad followed a speeding police escort down Washington St. It was 5 p.m. and most businesses are closed. I had read that the Boston Marathon brings in $1.5 million of revenue into the area. Walking around the urban landscape without the vibe of human activity was surreal. There would not be any victory celebration this marathon.

Three days later, things aren’t much better. Many of the people that I talk with feel the same way. On the T-Line to the airport, I talk to a woman who wasn’t allowed to finish. She had a hard time trying to put her emotions in words. We all feel guilty talking about our marathon in the context of things. We are angry, confused, selfish, and uneasy. Every time friends ask me about the race, I can’t really go into the details of my personal experience. Since I wasn’t directly at the explosion site, I can’t report on that incident either. Out of respect for the victims and their families, I find myself having a difficult time communicating my own trivial experiences at Boston. But hope begins to filter in. I look for anything positive. I hear about remarkable recovery efforts from some of the survivors. Boston firefighters say that we’ll be back next year. Bostonians are a resilient breed. So are marathoners.

I heard from family, friends, friends-of-friends, co-workers and hometown media. Our local running community networked to ensure every one was safe. Once I’m at home and start the routine again, the people and friends that I generally interact with are extremely caring and comforting. The numbness slowly begins to wear off even though I can’t seem to get away from the news of the Boston Marathon terror. Yesterday, I hear a Fresh Air interview with Amby Burfoot, editor-in-chief of Runners World Magazine and the 1968 Boston Marathon Champion. He has run the event every five years since to commemorate his victory. This year, he was not allowed to finish and came .7 of mile short of completing his marathon. His comment about running being a “gift” hits home and helps put things in perspective.

This morning, I realize that my plan to commemorate my 26 running companions now includes a much larger community. After the 2013 Boston Marathon, I now have 23,336 brave companions to honor along with hundreds of first responders. And I extend my deepest condolences and sympathies to the friends, loved ones, and family of all those killed and injured. 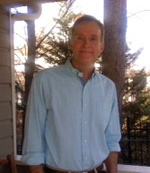 Want to help the victims? Visit onefundboston.org to assist the people most affected by the tragedy.