“You know it’s a damn shark, and don’t pretend like it’s something else!”

Apparently nowhere is safe from threat of a shark attack anymore, not even on land, in the winter, in the snow. With the recent announcement that the big budget, highly anticipated “Avalanche Sharks” is in post-production, we here at BRO felt compelled to dig into the legend of the snow inhabiting shark attack movie phenomenon, kicked off by “Snow Shark: Ancient Snow Beast” from last year. The IMDB.com description reads as thus:

12 years ago during a scientific expedition 3 animal biologists stumbled upon a great discovery that ended in tragedy. Whatever killed them has awoken and now the legend of the Ancient Snow Beast could prove to be more than just a legend.

Yap. That just about sums it up. The above trailer is amazing due to the weight the actors give to their characters, the suspense drawn out by the night scenes, the fully realized snow, etc. but it lacks the Hollywood glitz and CGI that gets movies into theaters around the country.

Back to “Avalanche Sharks,” which has a decidedly more sport-oriented plot line than “Snow Shark.” From the writer and director:

After an horrific avalanche, the staff members at Twin Pines Ski Resort start to receive reports of missing people and creatures that move beneath the snow. As the body count piles up, the management tries to cover up the situation, which leads to disaster on their busiest day of the year: Bikini Snow Day.

Spring break in the mountains: snowboarding, beer, drunken co-eds in bikinis. As the yearly Bikini Ski Day party descends on a small mountain town, something lurks beneath the snow. When an unwitting rider causes an avalanche, it awakens a huge, menacing, pre-historic Snow Shark! With a newfound taste for human flesh, the Snow Shark picks off the snow bunnies mercilessly. Cut off from help by mountainous terrain and blinding snow, the local sheriff must make an unlikely alliance with a motley crew of snowboarders to take down the Snow Shark before the white hills run red with blood!

This sounds like a combination of Hot Dog: The Movie, Lake Placid, Deep Blue Sea, Frozen, and Tremors – which happen to be my favorite movies, in that order. This is the movie poster for Pete’s sake: 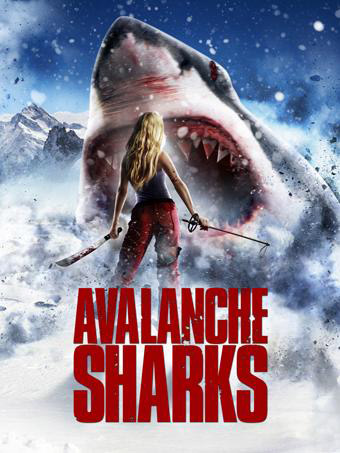 I mean, what’s her plan for that ski pole with the basket that looks like it’s from 1920?

Unfortunately, there is no trailer for “Avalanche Sharks” which we have to assume is because they are working on all the extreme special effects they are going to have unless they train a real shark to swim in the snow –  which of course will escape its handlers and go on an actual snow shark attack killing spree spawning another B-horror movie spin off (where does art leave off and real life begin? We may never know). If that happens, we have bigger problems. So there will probably be CGI mountains, CGI snow, CGI snowboarding tricks, CGI sharks, CGI avalanches, and CGI bikinis. Oh, Brooke Hogan – Hulk’s daughter – is also in the film, lending her big name panache to the project. She will probably also be in CGI.