I knew of Jon Stickley for a long time. I knew he had played with The Biscuit Burners, did a stint with Town Mountain, jammed with Billy Nershi of The String Cheese Incident, and was a bad ass guitar picker.  I don’t remember being prepared, though, for my introduction to his music.  The first tune of Jon’s that I heard was his trio’s rendition of “Blackberry Blossom” a couple years back when I featured it on Trail Mix.  I was blown away.  I could hear the roots of the vaunted bluegrass standard rooted in the recording, but layered over top of were rhythms and emotions I didn’t expect.

I have been a fan ever since.

Travis Book, of The Infamous Stringdusters, one told me that he couldn’t take the debut record from Stickley’s trio out of his cd player.  “Jon’s music is the sound of pure joy,” says Book.  “It a player’s personality flows through his instrument, Stickley does it better than anyone I have ever met; you can practically hear his ’55 D-18 laugh and smile wh 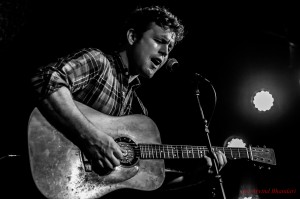 en you listen to them play ‘Palm Tree.’  More likely to underplay than overplay, he makes everyone around him sound and feel better.”

Stickley, on his vintage Martin, with Lyndsay Pruett on fiddle and Patrick Armitage on percussion, don’t just blur lines within the soundscape.  They eradicate them.  The trio’s music is bluegrass, hip hop, jazz, and even dubstep, an acoustic familiarity turned upside down by the band’s willingness to leave no sonic trail unexplored.

And, of course, the band will be appearing on Friday, May 23rd, at Rooster Walk Music & Arts Festival in Martinsville, Virginia.

Trail Mix wants to give you a chance to catch that set, along with everything else going on Friday of Rooster Walk, by taking a shot at our trivia question below.

Email your response to [email protected]  A winner of two passes to the Friday festivities will be chosen from all correct answers received by noon on Friday, May 9th.

Question: Though renowned as a sick guitar player, Jon typically played what instrument during his time with Asheville bluegrassers Town Mountain?