Sometimes, a title just fits.  Such is the case with Goin’ In Hot, the new release from Moot Davis.  Mere days after wrapping up the recording sessions for the record, the studio where Moot and his mates laid down the tracks caught fire and was left a smoldering ruin.  The music gods, however, were smiling, and all of the tunes were found undamaged on the hard drive of an otherwise ruined computer.

Trail Mix caught up with Moot to chat about the new record, unusual names, and finding country music in New Jersey.

BRO – You are the first person I have ever chatted with named Moot.  Care to shed some light on your name?

MD – Hah!  When I was younger, I was getting into some trouble in New Jersey – married women – so I went to live with an uncle in New Mexico for a bit.  My uncle was a bit eccentric, and he had met a guy named Moot on a hunting trip out there.  So, when we started working together out there he just started calling me Moot.  We thought it was funny and it stuck.  After I went back east, whenever I got in trouble, I’d give the name Moot Davis.

BRO – You recently played some shows with Marc Ford, noted guitarist and producer, out in L.A.  Got a favorite Black Crowes’ tune he played on?

MD – Marc is great.  I don’t have a particular favorite.  I think all those tunes are killer, but I was more interested in Marc as a producer.  I was very interested in the albums that he made with Ryan Bingham.  That’s initially why I got in touch with him.  We were actually going to make the fourth album together, but it just didn’t work out that way.  We ended up making it in Nashville with Kenny instead.

BRO – Kenny Vaughan is one hell of a guitar player.  How was it working with him as a producer?

MD – I really like working with Kenny.  He’s no-nonsense and we just get in there and get it done.  I think we made two really good albums with him.  I’m very proud of those albums and I think he really likes the songs and that’s what you really want out of a producer – somebody that likes the actual songs and can help you get the best versions of them.

BRO – How does a boy from New Jersey get this deep into countrified rockabilly?

MD – Both my mom and dad’s families are from West Virginia.  When I was a kid, we would take trips down there in the summer.  I don’t know, I guess it just happened.  And it might just be in you to start with, no matter where you grow up.

BRO – We are featuring “Love Hangover” on this month’s Trail Mix.  What’s the story behind the song?

MD – I do this thing called crossfit and one of my friends/teachers, Andy Mahaney, is always telling jokes.  He once made a joke about a hangover and then mentioned the phrase “love hangover.”  This happened while we were all working out, by the way, and he said,  “There you go, Moot.  There’s a song for you.  “Love Hangover.’”  So I wrote it on the way home from crossfit.  It was pretty easy to do, because I was just coming out of a long term relationship.

BRO – You have just started your own label, Crow Town Records.  What can we be looking forward to in future releases.

MD – We are wondering that ourselves.  It’s a pretty new venture for us and we’re just trying to get our first release out at this point.  We have high hopes, so we will just have to see what the future brings.

You can grab a copy of Goin’ In Hot after it releases later this month.  For more information on the record or when Moot Davis might be hitting a stage near you, surf over to www.mootdavis.com. 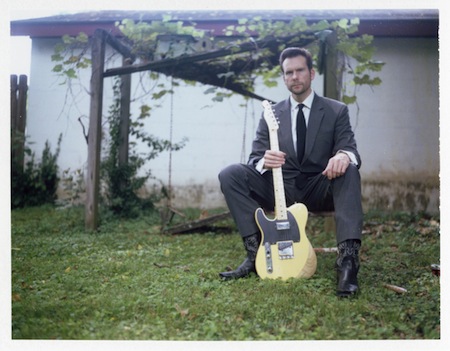