A bicycle can find a great home almost anywhere. A bicycle’s needs are basic and its demands are straightforward; sounding something like, “get off the couch and take me for a spin.” From mountain towns with punishing terrain and bars flanked by foam-pad-tailgates to urban jungles where bikers sport shoulder bags and chunder is a manhole, here are the Blue Ridge towns that bicycles love.

Brevard, North Carolina – Once mountain biking’s “best kept secret”, Brevard has a fat-tire grip on its claim as the capital of southern cycling. This small Appalachian hamlet has become a bicycle boom town with shops, breweries, and a variety of other businesses popping up in the wake of singletrack fever. Recent additions like The Hub Bike Shop, Pisgah Tavern, and Pilot Cove campground are enhancing Brevard’s regional repute and making it one of the hippest riding destinations in the world. The inexhaustible abundance of singletrack in Pisgah Forest, miles of windy road riding, including the Blue Ridge Parkway, and world class races and events means more and more riders are making the pilgrimage. Additionally, Brevard College has one of the top road, cross country, and downhill programs in the nation.

Must Ride: Any single track trail descending from the top of Clawhammer Road: Bennett, Black, Avery.

Chattanooga, Tennessee – 120 miles of purpose-built single track within 10 miles of the city limits only begins to explain how much Chattanoogans dig their scoots. With planners carving miles of trail, instituting a bike share transit system, and passing laws that protect cyclists, this small city is earning much applause for its progressive, two-wheeled worldview. Bicycle Magazine called Chattanooga the 27th best biking city in America, the highest designation to any small southern city. On top of new trail systems and greenways, Chattanooga offers all the extra amenities that make for a fun riding destination, including happening neighborhoods, with breweries, restaurants, and decked out bike shops, like Suck Creek Cycle, and even an adventure hostel called The Crash Pad.

Must Ride: Racoon Mountain for wildly fun singletrack, or Enterprise South Nature Park, where there is a little something for the whole family.

Harrisonburg, Virginia -With its proximity to a lifetime’s worth of trail riding and a full calendar of bike races and festivals, Harrisonburg is the capital of Virginia’s mountain biking and cycling scene. In addition to hosting stellar backcountry races like the Shenandoah 100 and rugged gravel grinders like the Harris-Doubaix, Harrisonburg is home to six bike shops and a collegiate team at James Madison University. While there, make sure you hit Massanutten Mountain for dirt and single track, or, to take advantage of breathtaking road rides through the countryside, head east of town to the Shenandoah Valley or up to Skyline Drive.

Louisville, Kentucky – Louisville has one of the richest biking traditions in the country. At the turn of the century Louisville was leading the national peloton, as a town fully enamored the new sport of cycling. In 1898, for example, 10,000 citizens took to their bicycles for a cycling parade. A little over 100 years later, Louisville still finds itself at the cutting edge of the bike world scene, as it was the first non-European city to host the World Cyclocross championship. And the groundbreaking tradition continues. Today Louisville is home to the largest underground bike park in the world, a 22-acre subterranean dirt world known as Megacavern. Louisville’s famed urban park system is relished by the countless cyclists who train on Olmstead’s Parkways for numerous regional road races. Antiquated single speeds are the preferable way to cruise some of Louisville’s hip neighborhoods, where bourbon, food, and music delightfully slosh together.

Must Ride: The Olmstead Parkways or Megacavern. You’re probably inclined one way or the other.

Davis, West Virginia –  Davis, West Virginia does not offer all the frills of other cycle-centric towns, but for what it lacks in amenities it makes up for with an authentic vibe and rowdy, black diamond single track. Besides, fewer breweries, shops, and crowds is a refreshing change of pace in an ever-more commercialized scene. The gear you truly need can be found at Blackwater Bikes, a main street dive which has served the Tucker County faithful since 1982. The wilderness areas of Monongahela, Black Water Canyon, and Canaan Valley surround Davis and offer immediate access to some of the most hair-bristling and technical trails anywhere in the East. Furthermore, every June the Canaan Mountain Biking Festival showcases Davis’s grassroots passion. Even the four-years-old gear up for trial races. Other area races include the Blackwater Classic and the Revenge of the Rattlesnake.

Must Ride: The Hellbender Cirque will give you a taste of the gnarliest stuff in the Canaan Valley. Commemorate the experience with  Davis-style apres-biking at Hellbender Burritos.

Best of the Rest 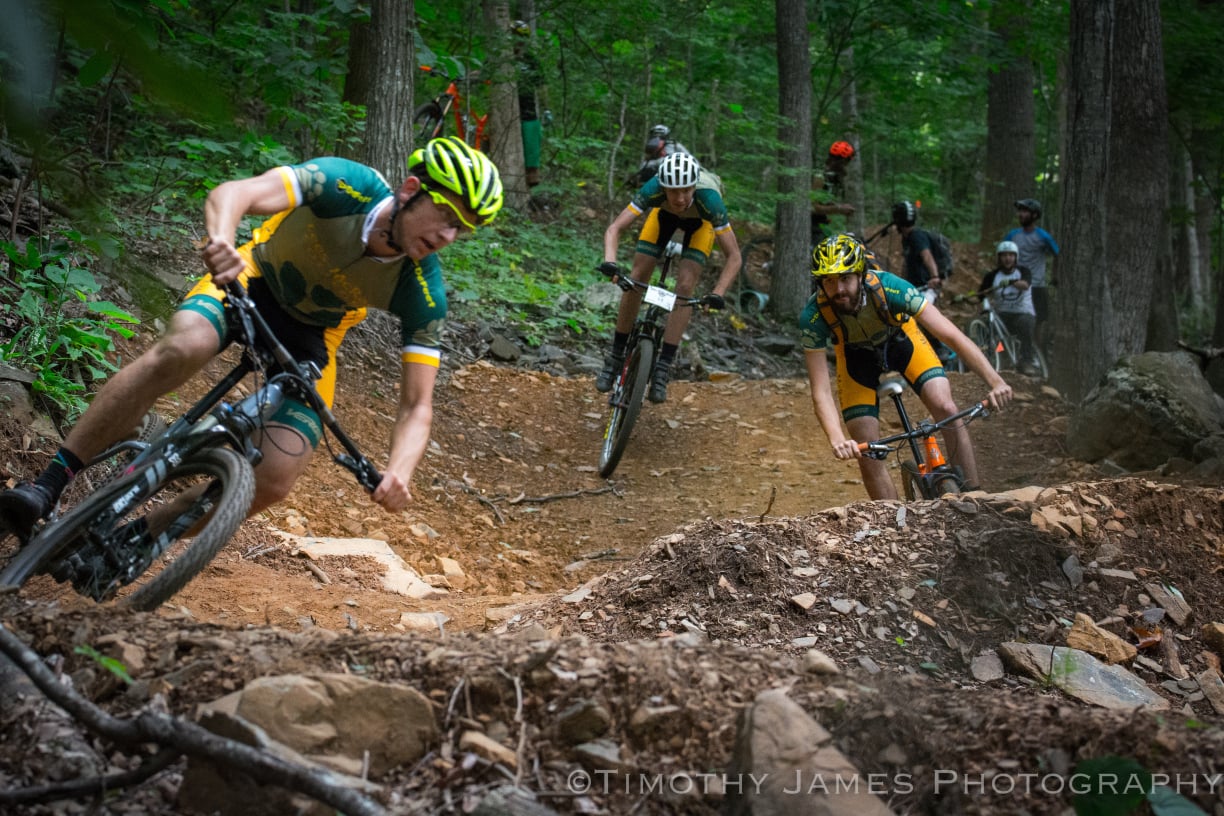 Ellijay, Georgia:  The capital of Georgia mountain biking serves up roughly 59 singletrack trails, such as Bear Creek and Pinhoti, as well as sweet digs at the Mulberry Gap Mountain Bike Get Away.

Washington, D.C.: Sharing systems, bike lanes, new trails, and other proactive approaches are making the nation’s capital one of the most bike-friendly metropolises in the country, especially as social planners try to bring biking to economically disadvantaged neighborhoods.

Asheville, North Carolina: While the Blue Ridge Parkway and the trails in Pisgah are international riding meccas, the best option could be a pedal, drink, and eat tour through downtown to South Slope to the River Arts District to West Asheville.