Pro cyclist Curtis Winsor leans on his training in the Blue Ridge to prepare for first season in the majors.

Arms stiff, head hanging, and gasping for air, I coasted past a “Leaving Rockingham County” sign. Connor Bell, my training buddy and junior phenom, didn’t look any better. The two of us had a no-sprint rule for the first few weeks of our offseason. This particular green sign marked our first gallop in over a month.  Despite lousy form, and discomfort, I couldn’t stop smiling. Just a day prior, I had signed my first professional racing contract with the Kenda 5-Hr/Energy Pro Cycling Team.

After weeks of back and forth with Kenda brass – and by that of course I mean weeks of my nagging emails essentially begging for a spot – I was the last rider signed to the squad. Between my victory dances and high-pitched squealing, I made phone calls to friends and family. Once the initial euphoria wore off, fear, panic, and excitement all stepped in. This whole bike racing gig was no longer an expensive hobby. It was now my job. A conversation with my coach reinforced my new mix of emotions. The verbal pat on the back was followed by, “It’s one thing to get a contract. It’s another to keep it and show that you deserve it.”

I had four months before training camp in Tucson, Ariz. As the unknown rookie low on the totem pole, I needed to arrive at camp fit and ready to go. Thankfully, I lived in the Shenandoah Valley with thousands of riding options and well-established loops from the Blue Ridge to West Virginia. Conquering massive routes mapped by veteran riders was a challenge within a challenge. The Tomahawk Loop, The Warrior Loop, The No Quiche Loop, and the queen of them all:  The Alpine Loop.

A quality training partner in Bell made the task at hand much easier. As we rolled away from the county sign, slow, fat, and out of race shape, we knew that 2012 was going to be a great year. We rode side by side like this every day for nearly four months, swapping insults and one-ups, munching energy-packed Honey Buns, nerding over our numbers, and constantly refining our movie star top-10. For the record, Evangeline Lilly and Jennifer Connelly are the front runners (Is my wife reading this?). Leaves crunching beneath our tires, each of us pushing the other, we got stronger and stronger. Perhaps too strong, too early.

By February, Connor had a couple elite mountain bike race wins to his name, smashing guys twice his age. I hadn’t raced but training camp was right around the corner and director Frankie Andreu would put us to the test with climbing drills, scrimmage races, and mock team time trials. Swapping the Blue Ridge for Tucson’s Mount Lemon, nervous yet excited, I felt like I had to prove that I belonged there.

To my surprise, every rider on the team, especially the well-established studs like Phil Gaimon, Roman Kilun, and Bobby Sweeting were beyond encouraging. After a solid camp, I was scheduled to race at the Joe Martin Stage Race. Two wins and a handful of podiums leading into it meant my training was working and on time. Still, the nerves to deliver and the inner pressure to succeed persisted.

It turned out that May was my month. The team took the Green Sprinters Jersey, third place overall, and a stage win with veteran Shawn Milne’s quick finishing speed. At this level, every rider on the team can take a piece of the credit and I felt I earned a small share that week.

We had just come off a successful stage with Shawn Milne throwing his hands up for the W and grabbing the green jersey. I ended up somewhere toward the bottom of the second page of results and a few minutes back. After trying to make the early move, the customary pee break (yeah…this actually happens), hauling at least 25 bottles throughout the day, and attempting to follow Frankie’s final instruction for the day to “crack the leader on the climb,” I had given one last push to bring the team up to the back of another’s train with five miles to go and finally dropped anchor. The “good job” from Frankie let me know I could party pace to the finish line where Shawn was looking for a podium hat. Even with the “good job,” I wasn’t so sure. I felt I still needed to prove I belonged up here.

Lying on the blacktop, tucked in a ball as 100 pros whizzed by I couldn’t believe my day was going to end like this. Had I done enough? Is my helmet cracked? Am I going to have to take one of those concussion tests? What’s my name?  I had just spent 25 miles in a three-man break that would force race leader Mancebo’s team to chase. Guzzling Cokes, breathing heavily, and grunting self pity ogre noises, I desperately tried to hang on. I charged for intermediate sprint points. Bad idea. I was shutting down and it was no surprise as much as I tried to hide it. As I unraveled, one of the more famous riders not only motivated me to stay with it…but he knew my name.

Even with a two-minute advantage, we were brought back to the peloton. Blown, I was content to sit on the back and let my legs refresh. Slipping back to grab waters from the team car, I looked up to see a break of ten rolling away. It turned out there was a major overall threat in it. We now had to chase them down.

I was toast. That didn’t matter, however. I had a job to do. Pulling through, gritting my teeth, I eventually cracked again. As I drifted back to find a place in our line, teammate Bobby Sweeting yelled, “Dude, you were in the break!” He knew my legs were jello and was surprised to see me still there. I gave him a push and fell back to catch my breath. Instead, the Coke was catching up and my burps had a less than refreshing caramel bite.

The break was caught, but still the race was not over. We had to give Shawn another clear shot at the line. Fully aware of my weak legs, I chose not to add to the firepower on the front for fear that any drop in speed on my part could hurt the team. Rather, I found a spot protecting Shawn’s back wheel from riders looking for a free ride. With less than three miles to go, two teams had control. Neither had fully opened it up quite yet but it was coming. Then, as is if in slow motion, the dominos were falling my way. 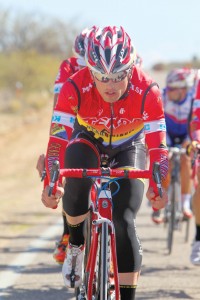 Death grip on the bars, my body tensely prepared for the unwavering smack of the pavement, I watched gravity pull Shawn’s green jersey towards mine. Somehow, he got a foot out and bounced off my shoulder and back into the race. I wasn’t so lucky. Bleeding on the pavement, I replayed the whole day and thought to myself that football players have no idea. The whizzing and clicking stopped. A pair of feet came running over. Frankie made sure I was okay while our mechanic grumbled (kidding, of course) about the tear in my bar tape.

With my bloodied torn shorts and bruised ego, I limped back to the finish line, still unsure of my performance. Thankfully, Shawn had managed second, solidifying the sprinter’s jersey lead.

In the airport the next day, Roman Kilun, former winner of the Tour of Virginia and well-respected vet, told me to stop overanalyzing the race and start thinking about my upcoming wedding. To him I had done a great job and it was time to celebrate—at Victoria’s Secret.  He walked in like he owned the place, knew exactly what he wanted, and made polite conversation with other women in the store while shopping for his wife. Conversely, I was sweating bullets. So I wandered to Best Buy.

Ten Days Without My Mistress

A couple weeks later, my fiancé and I planned the final details for our upcoming wedding. Director Andreu called to congratulate me and told me not to worry about missing the USPRO Road Championships, all but assuring me a spot for the following year.

The stress lifted. Just in time for my bachelor party. No, I didn’t get a stripper or have a drunken Vegas rager. Rather, my former teammate and best man Andy McKeegan led our last Blue Ridge adventure. The pleasant route featured Civil War battle sites, a solid 45-minute coffee stop, memories from our Cat. 3 days, and of course three state line sprints.

On the wedding day itself my wife, Alexa, and I received many congratulations, but more importantly, rave reviews of my dad’s home-brewed nut brown and IPA. We set off on our honeymoon, and I’d be lying if I said I wasn’t distracted by the fact that I’d be spending ten days without my bike – my mistress, as Alexa calls it.

When I returned to racing, I was shattered and mentally deflated. Back were the nerves and doubt. With some hard rides under the summer sun, I eventually found my legs, followed by a few more results and strong performances. Connor had earned a spot for the Junior World Championships, but form was starting to fall off for both of us. Our smashing sessions on Skyline Drive and over graveled mountains early in the year were beginning to take their toll. Too much, too early, confirmed. On top of that, my team was merging with another, limiting the roster spots available. Enter more stress, stage right.

Flash forward a couple months. The leaves are changing again. Red and gold everywhere. This time in a new place, with new roads, and a new team for 2013. Just outside of Charlottesville, Virginia, pressed up against the eastern side of Afton Mountain, I’ve begun my preparation for another season at the pro level. Though my training buddies are gone and form has returned to its ugly laboring pace, I still can’t wipe the smile from my face. I get to ride my bike for a living, and I get to do so in arguably the most beautiful place in the country. •

Now you know what a pro cyclist’s rookie season is like, how about racing a tandem mountain bike in a 100 mile mountain bike race?