Yes, it may look strange, but they could be the fastest way to marital bliss…or divorce.

Here’s the trouble with the tandem bicycle: It just looks funny. Like circus funny. Two adults stuck together on a conjoined bike, you expect the riders to be wearing red clown noses. The fact that tandems simply aren’t common in the U.S. doesn’t help that first impression. Tandem manufacturers are tight-lipped about participation numbers, but how often do you see a tandem roll up to the start line at the races you enter? It’s a seemingly-bizarre niche sport that many people put in the same category as the nude 5K. As in, “It looks kind of fun. Maybe, if the opportunity presented itself, I’d try it, but I certainly wouldn’t make a habit out of it.” Get past the awkwardness of the sport—two people should rarely be that close to each other while wearing lycra and sweating—and what you have is one of the finest examples of teamwork in the world of athletics. Think synchronized swimming. Riding a tandem successfully on the road, or dare we say it, on singletrack, may look a little strange, but it’s a thing of beauty and courage. And only the strongest couples need apply.

Yes, when I say “couple,” I mean of the romantically involved variety. Spouses. Partners. Lovers. In the U.S. the vast majority of tandem riders are bound together by law.

“Just about all of the tandem teams we see are couples,” says Roger Strauss, an Atlanta-based cyclist who organizes the annual Georgia Tandem Rally with his wife and cycling partner Evo Kofsky. Of the 120 teams that show up annually for the rally, most if not all are husband/wife duos with the guy up front (the “pilot”) and the woman in the back (the “stoker”).

“Every now and then, you’ll see a couple of guys trying to break the land speed record on a tandem, but the majority of tandem teams are couples,” Strauss says.

That’s not the case in Europe, where tandem cycling enjoys more mainstream acceptance. The Roc d’ Zur in France is probably the largest off road tandem race in the world, pulling more than 200 teams every year, the majority of whom are guy/guy combos. Occasionally in the U.S. you’ll see two dudes enter a bike race on a tandem (the Shenandoah Mountain 100 and Cohutta 100 saw tandem teams this year), but for the most part, all of those Y chromosomes on one bike is an anomaly on this side of the Atlantic.

Because tandem teams are usually couples and because tandem cycling can seem like such an extreme pastime for a couple to enjoy, bike shop guys like to call the double bikes “divorce missiles.”

“Every couple that sees my wife and me riding wonders the same thing: could we do that? Would we enjoy it, or would it kill our marriage?” Straus says. For him, riding a tandem is a no brainer. “It takes the weaker rider and brings him or her up to the level of the stronger cyclist. Before riding tandems, when I rode with my wife, I’d get to the turn and wait. Then get to the rest stop and wait. She was three to four miles slower than I was. On a tandem, we ride at the same speed as on my single bike, but I know where she is all the time.”

You can imagine the hesitation of some couples though. Imagine driving a car, but your spouse gets to control the gas and help turn the vehicle. You can see where problems might arise in that scenario.

Alex Nutt builds mountain bike tandems for teams all across the country. He started riding tandems for the exact same reason most people start riding tandems: so he could spend time with his wife and so his wife could enjoy the same kind of mountain bike experience he enjoyed. “The first ride we took on a tandem, we had a ball,” Nutt says. “But a lot of first tandem rides suck. You’re introducing a new set of sensations on the bike. It’s a big, unwieldy, uncontrollable machine that you have to work together to control. It’s not easy to get used to. I’d say whatever direction the relationship is going, if you get on a tandem, it’s going there faster.”

Andy Applegate is a cyclist with 11 national championships under his belt. Twelve years ago, his parents gave him and his wife, Cara, a wedding present: money for a tandem bicycle.

“We bought a used road tandem. After the first ride, we thought we’d sell it and never get on a tandem again. It was tough just getting the bike around a turn,” Applegate says. “But we gave it another shot. Two rides later, we were in love with it.”

On singletrack, mountain bike tandems are surprisingly agile. Not every trail is meant for a tandem, but flow trails become flowier because of the momentum created on the bigger bike. 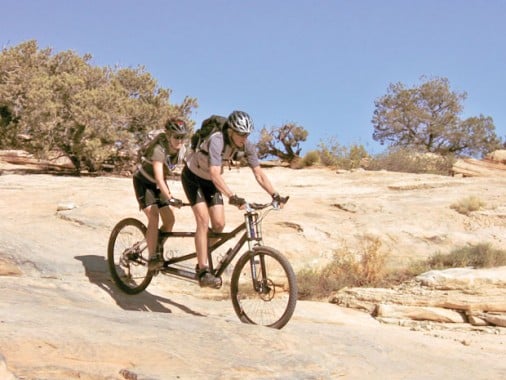 “There’s not much that we can’t ride on a tandem,” Applegate says. “Some of the more technical trails in Pisgah might be tough, but we’d get through them. Generally speaking, the only thing that’s really difficult on a tandem is a tight switchback. But it’s a trade-off. Because the tandem is so big and burly, you can point it at any obstacle and just cruise over it.”

What makes riding a tandem so tough is that the drivetrain is locked together. If the pilot is pedaling, the stoker has to be pedaling at the same cadence. Getting a tandem around a corner can feel a lot like driving an RV through a mountain pass. The pilot steers, shifts, and brakes, but both riders have to work together to create momentum and get the bike where you want it to go.

“The stoker has a surprising amount of influence over what the bike does,” Alex Nutt says. “My wife weighs half as much as I do, but if she leans out to the right, the bike will go to the right. If she rides with stiff arms, or stands up, that affects the bike. I can feel it.”

And the stoker can’t see a thing except for the back of the pilot, which means the pilot has to narrate the ride ahead, particularly on a mountain bike tandem.

“The amount of communication differs with each team,” Nutt says. “Some teams call out every shift. All pilots have to call out roots, rocks, and drops that are coming up. When you approach a log or rock, the pilot has to set the pedals up so the stoker’s pedal can clear the obstacle too. My wife and I only have one code phrase: ‘Oh crap.’ I say that and my wife knows we’re getting off the bike.”

In addition to riding tandem with his wife, Andy Applegate has piloted a blind biker in the Paralympic tandem trials, and piloted another fellow biker in the Masters Road Championships. After riding with friends, he’s not surprised that the best tandem teams tend to be husband/wife duos.

The Applegates are one of the best tandem teams in the business. They won the Elite National Championship tandem in 2010 and own the tandem category of the Leadville 100, winning three years in a row. They were also the first tandem team to finish Leadville in under nine hours, which is no small feat. To Applegate, the true benefit of riding a tandem is the fact that you’re so entwined with your partner for the duration of the ride, which ironically, is the one thing that keeps most from trying it.

“One of my goals in life is to get more people to ride tandem. It’s a different experience than riding alone. It’s actually a different sport altogether,” Applegate says. “You have to think for two, which can be difficult, but is also really rewarding. You get to share every victory or defeat as a team, pedal stroke for pedal stroke. Of the 11 national championships I have, the one I remember the most is the first tandem road race that we won. You literally did it together, and you have that person to share it with.” •

Check out the Tandem Freeride Invitational

“There are some couples that shouldn’t ride tandems,” says Alex Nutt, who sees his fair share of teams that succeed and fail. “It takes a huge amount of trust from both people, but especially the stoker.”

Here’s a quick relationship quiz to see if you and your partner are compatible enough to successfully ride a tandem. Answer yes to any of these questions, and you may want to think twice about going tandem.

1. Does your spouse constantly press the imaginary break in the floorboard when riding shotgun with you in the car? Does he/she reach over and put your blinker on for you? One person has to relinquish a considerable amount of control. The stoker can’t be a backseat driver.

2. Do you fight over the best route to the grocery store? Most tandem arguments center around directions, as in, “you should’ve taken a left back there.”

3. Did you hide the real cost of your latest bike from your spouse, telling him/her that you “got a great deal” without actually divulging the price tag? At a minimum, tandems are twice as expensive as a single bike. Usually, you’re looking at tripling your cost.