It took Sean Cobourn more than 30 years to climb the Chimney, a 315-foot monolith inside North Carolina’s Hickory Nut Gorge. Most of the chasm, which is preserved as Chimney Rock State Park, is thick with climbable granite, including hundreds of routes and boulders on Rumbling Bald, a granite dome on the north side of the gorge. But the Chimney, easily the most prominent rock in the area, has been off limits to all but a few lucky climbers throughout the years. Chimney Rock Park and the Chimney was a privately owned tourist attraction until the state purchased it in 2007.

“I always dreamed about it,” 50-year-old Cobourn says. “There were a handful of people who got to climb it occasionally because they knew the family that owned the park, but I was never in that crowd.”

After years of pining, Cobourn had an opportunity to tag along with a friend who guides inside Chimney Rock Park. Finally, the dream was a reality. Sort of. The Chimney is a two-pitch route, but the second pitch is aid climbing, which takes specialized gear. Cobourn and his partner were only prepared to climb the first pitch, an overhanging 5.11 that delivered them half way up the monolith that towers over the gorge and Lake Lure.

“Even just climbing that first pitch, I can say it’s one of the best routes I’ve ever done,” Cobourn says, adding that the rock didn’t disappoint after 30 years of anticipation.

Cobourn spent 2011 knocking out 50 first ascents on cliffs that he’d previously only dreamed about climbing—most of which were on private property. These crags are tantalizing for climbers, but ultimately off limits without permission. They are forbidden fruit. And the Southern Appalachians are full of them.

“The East Coast has less public land than the West, so a lot of our most impressive cliffs are on private property,” says Brad McLeod, one of the founding members of the Southeastern Climbers Coalition (SCC). The dearth of public property has led the SCC to begin buying cliffs and tracts of boulders to secure climbing access. The group is in the business of plucking forbidden fruit for the good of all climbers, with more than half a dozen cherished crags in their real estate portfolio today.

Currently, the most tantalizing piece of forbidden fruit on the club’s radar is Yellow Creek, a cliff that dominates a corner of Lake Weiss in Alabama, but has a landowner that’s uninterested in selling or allowing climbing of any kind.

“It’s a huge, beautiful orange and yellow sandstone cliff with a waterfall running down it,” McLeod says. “We drive by it and salivate.”

But McLeod knows if he keeps working the legal channels and trying innovative approaches, good things will happen. He also knows what it’s like to finally get to climb those forbidden crags he’s salivated over for years. McLeod and his team worked to gain access to Castle Rock, in Tennessee, for 15 years.

“That cliff was definitely a forbidden fruit. You’d see it clearly as you were driving to the sport climbs at Foster Falls. I’d always wondered if we’d ever get to climb it,” McLeod says. Four years ago, after signing a lease that secured access to Castle Rock for all climbers, McLeod finally got to climb the cliff. “To finally climb these cliffs, it’s like in Raiders of the Lost Arc, when they finally make it into the temple and see all that gold.“ 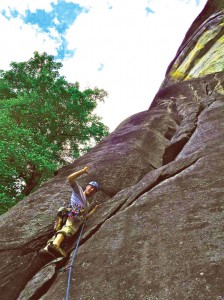 Thanks to the hard work of climbers like McLeod and Cobourn, much of the South’s forbidden fruit has been plucked and preserved for the rest of us. Here are three impressive crags that were off-limits to climbers until recently.

The tallest cliff east of the Mississippi, Laurel Knob offers 1200 vertical feet of slab and water groove climbing on granite. Some of the most daunting multi-pitch trad climbing is found here. And the long approach through Panthertown Valley is just as epic as the climbing.

Home to some of Alabama’s toughest routes, including the state’s first 5.13a, as well as the first 5.13d/14a, Yellow Bluff was a hotspot of hard climbing in the ‘80s before access was shut down. The SCC secured access to half of the cliff, offering roughly 1,000 linear feet of climbing, with a variety of routes from 5.5 up.

This buttress remains on private land near Foster Falls State Park, but a long-term lease agreement has secured climbing access. The cliff is a half-mile long and 80 to 120 feet tall with bullet sandstone and more than 50 sport and traditional routes. You’ll find one of the hardest routes in Tennessee at Castle Rock, Apes on Acid, a 513d.

Check out another outdoorsy hotspot, Pine Mountain in Kentucky!