MagazineDecember 2018The Other John Muir Trail

The Other John Muir Trail

In September 1867, two years after the end of the Civil War, a wild-eyed 29-year-old man left Louisville, Kentucky on foot with little money, food, or plans. Only a few months earlier he had suffered a serious eye injury in a work accident. He was heading south on a botanical journey with an ultimate destination of South America, then maybe Europe. He did not know it then, but he would become one of the most famous conservationists in American history. His name was John Muir.

Muir is known mostly for his founding of the Sierra Club, meetings and campouts with Theodore Roosevelt, and his journeys throughout the Sierra Nevada, and Alaska, but ask most Americans about his time in the South and they will likely never make the association. Yet this journey in 1867 was his first such sojourn, and one of his longest. He did not make it to South America, but he made it to Cuba, going for days at a time without food or money, and sleeping in the open air. His story of this journey became The Thousand Mile Walk to the Gulf, a portrait of the southern Appalachians and the Deep South at a time of great change and transition.

Muir walked through Tennessee’s Cumberland Mountains, crossing the Blue Ridge in eastern Tennessee and walking up the Hiawassee River Valley to modern day Murphy, N.C., before turning south to Blairsville, Georgia and the north Georgia mountains.

His path up the Hiawassee was the same path I am walking today out of Reliance, Tenn., a national historic district, where two outfitters, a burger and beer joint, and a few odd and interesting historical buildings make up the entirety of the architectural landscape. I am here because the John Muir National Recreation Trail begins here, running for almost 20 miles up the valley before terminating near the tiny hamlet of Turtletown.

This was wild country when Muir passed through here in 1867. The Cherokees had only been removed a few decades earlier and Muir described it as “the most primitive country I have ever seen, primitive in everything.”

As I leave Reliance and walk upstream, I imagine that the river of Muir’s visit did not look altogether different than it did when Muir described it.  Although there are dams upstream, beginning not far from the river’s headwaters with Lake Chatuge, the river here looks wild and free, rugged and forested. The trail stays close to the river and would be impossible to travel in places during high water. The meager online references I find have accounts of hikers turning back during such times. 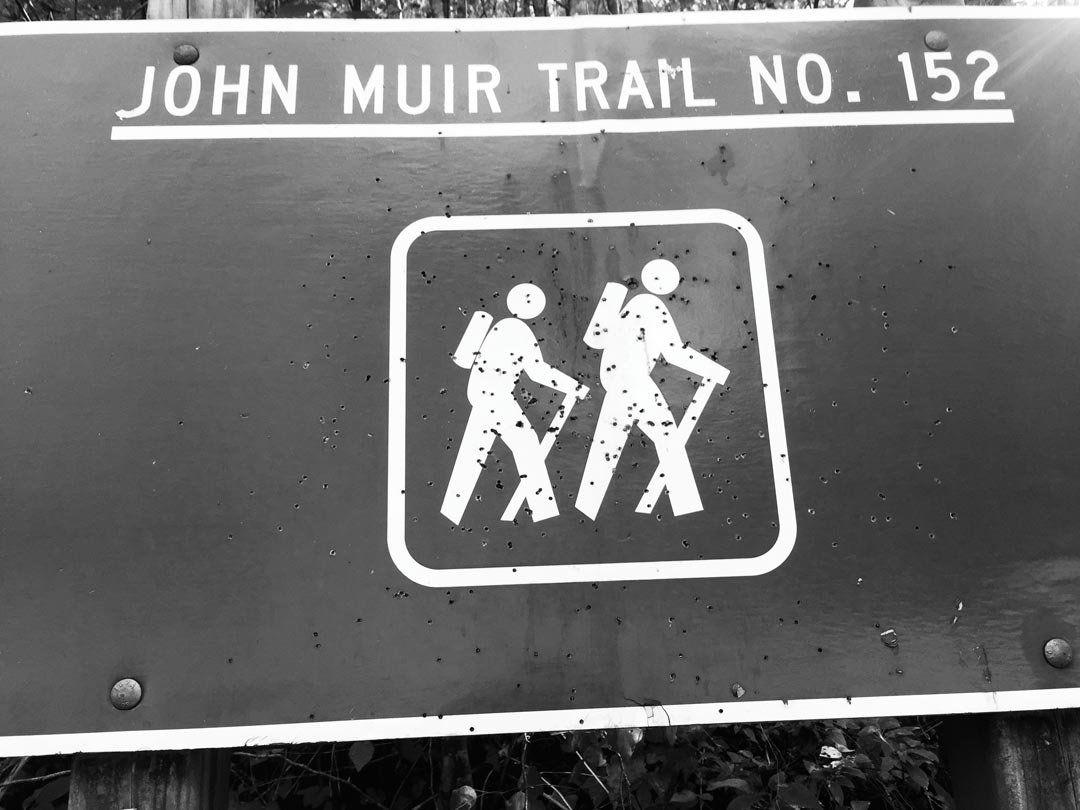 Muir described the Hiwassee as a “most impressive mountain river. Its channel is very rough, as it crosses the edge of upturned rock strata, some of them standing at right angles, or glancing off obliquely to right and left.” The river is loaded with large rocks and sluices, deep pools, and shallow rock filled rapids. It is much wider than I imagined it would be, knowing its size and appearance before it loses its wildness in the depths of Lake Chatuge, followed by Lake Hiwassee and Lake Appalachia.

On September 18, 1867, a farmer in eastern Tennessee took Muir to the crest of the Unaka Range, the long spine of the Great Smokies that forms the TN/NC state line, and which runs south to Georgia’s Cohutta and Tennessee’s Big Frog Wilderness areas. Muir describes this visit in some detail: “The scenery is far grander than any I ever before beheld.  The view extends from the Cumberland Mountains on the north far into Georgia and North Carolina to the south, an area of about 5,000 square miles. Such an ocean of wooded, waving, swelling mountain beauty and grandeur is not to be described.”

The amazing thing about this area is that it is still the darkest spot on the map, with one of the biggest concentrations of roadless National Forest and Designated Wilderness areas in the region. It’s a long spine of wildness, beginning with Great Smoky Mountains National Park, and descending southward through the Joyce Kilmer-Slickrock Wilderness, Citico Creek Wilderness, Snowbird Wilderness Study Area, Bald River Gorge Wilderness, Upper Bald Wilderness Study Area, and ending with the Cohutta/Big Frog Wilderness complex. I don’t believe there is another area in the eastern United States, and definitely not southern Appalachia, where such a description would be as close to accurate today as it was 150 years earlier.

What is different is the invasive-exotic plant life along the river, plants that Muir would not have recognized. From the trail’s beginning, the meager and struggling riverine forest is choked with privet, stiltgrass, multi-flora rose, autumn olive, and Japanese honeysuckle—all introduced and spreading far and wide. But there are also native pawpaws, umbrella leaf and Frasier magnolias, hazelnuts, walnuts, and a suite of fall wildflowers.  I see three anglers and a handful of boaters in eight miles of walking, but no other hikers, save two flip-flop clad tourists who were near the trailhead where I began, walking a bit north of the parking area for another view.  It’s hard to believe on such a spectacular day, where less than ten miles to the south the Ocoee River is packed with paddlers, commercial rafting, and logjammed tourist traffic.

Should I continue walking another ten miles or so, as Muir certainly would have, I would emerge on State Highway 68, where not far upstream the river end is held back by Lake Appalachia dam. I can’t make this 16-mile journey in a day, so I return in two weeks to go south from 68, down the Hiwassee to my departure point. From the start, I’m surprised at the lack of use. The river is just as spectacular, but the trail is overgrown, and I realize that I’m going to spend a chunk of the day crawling over and under blowdowns, and at times, simply trying to find the trail. The trail has seen no maintenance work in years. It’s a warm, dry day, and I consider every snarl of downed trees to be a five-star hotel for copperheads. My eyes study patterns in the leaves and grass as I proceed.

What forest did Muir see here in 1867? The Forest Service has cut the area heavily in recent decades, but occasionally I see a large chestnut oak or tulip tree that escaped the blade. There is also remnant rivercane, and loads of pawpaws, as well as the same invasive-exotic species. At one point, the privet is so thick that it has choked out all other vegetation along the river.  No campsites, no trash. I see one fire ring at about mile five, and it looks like it was used a very long time ago.

I can’t help but wonder if my feet are touching the same spots that Muir did. What was on his mind? What dreams fired his imagination as he wandered this once wild valley? I do know from his journal that he was every bit as awestruck as I am on this bright October day.

Muir arrived in Murphy on September 20th and wandered around for day or so, exploring what he describes as the “groves and gorges” of the town. It was a rugged and dangerous place then, especially in those immediate years after the war. And much like the Hiwassee river of today, Murphy still has a bit of a wild edge to it. It’s the last small town in the far corner of western North Carolina you pass through before entering Copper Hill, Tenn., and the site of one of the biggest American industrial disasters of the 20th century: copper mining that poisoned the air and soil so badly that the forest is still in recovery.

Today in Murphy, Muir would see a large billboard for Mackaysville Gun and Drugs. Yes, pick up your painkillers and your ammo in the same place. There are also pawn shops, fast food restaurants, vape shops, tattoo parlors, a casino, a growing restaurant scene, and a decent microbrewery.

On your way out of town, near the John Muir trailhead, there’s Field of the Woods, an enormous Bible theme park, free and open to the public. Ten commandments the size of skyscrapers cover a hillside. It’s just one sample of the interesting backwoods places and communities to be encountered here.  Just over the NC/TN state line, there is a small bar that must be the most remote bar in North Carolina. It’s called the Thirsty Turtle. Another worthy stop in this surreal landscape.

And the fact that John Muir traveled through here makes it all the more surreal. John Muir, founder of the Sierra Club and one of the most dedicated conservationists who ever lived, walked this same trail, saw these same rocks. I hope the trail gets some good love and much-needed maintenance in the future, though, and that his significance here grows.

If you decide to pay the area a visit, read Muir’s A Thousand Mile Walk to the Gulf before leaving. It will make your trip a special one. Except for a few occasional rises to avoid difficult bluffs, the trail is all on the river, which should make it an easy and relatively flat walk. But the trail’s condition is so bad that time must be allowed to navigate the blowdowns and dense vegetation. When Muir passed through here in the mid-19th century, this trail would have been a well-used trade path, in far better shape in 1867 than it is today.

Muir carried on from here, walking all the way to Cedar Key, Florida before catching a boat to Cuba. Then on and on and on, he wandered, until he could wander no more.