Diversify Outdoors is changing the face of adventure.

At the beginning of this year, #DiversifyOutdoors had only been tagged a few hundred times on Instagram. Danielle Williams, founder of Team Blackstar Skydivers and Melanin Base Camp, posted a lot of those photographs.

Then Williams launched Diversify Outdoors, an online coalition of organizations and people who are promoting diversity and inclusion in the outdoors. Eight months later, #DiversifyOutdoors has been tagged more than 20,000 times on Instagram.

“It was a confirmation for me that I’m not the only one, and none of us are the only ones,” Williams said. “There’s a community out there. It’s just a matter of getting people connected. And that’s kind of our role as digital influencers.”

Williams grew up running and hiking outside with her family in North Carolina. But it was not until she joined the Army in 2006 that she learned to parachute. In 2011, she started skydiving in between tours and has recorded more than 600 jumps in seven years.

She started Team Blackstar in 2014 to promote African Americans in the skydiving world. Williams knew there were other skydivers of color out there, but she did not see them represented by the larger skydiving community.

As Team Blackstar grew to 270 skydivers around the world, Williams started thinking more broadly about the outdoor community as a whole. In 2016, she started Melanin Base Camp on Instagram as a place for people of color to share their adventure stories and photographs.

“I wanted it to be a hub for different kinds of people who do different types of things,” Williams said. Here, Danielle talks about how Melanin Base Camp took off and became a launching pad for Diversify Outdoors. 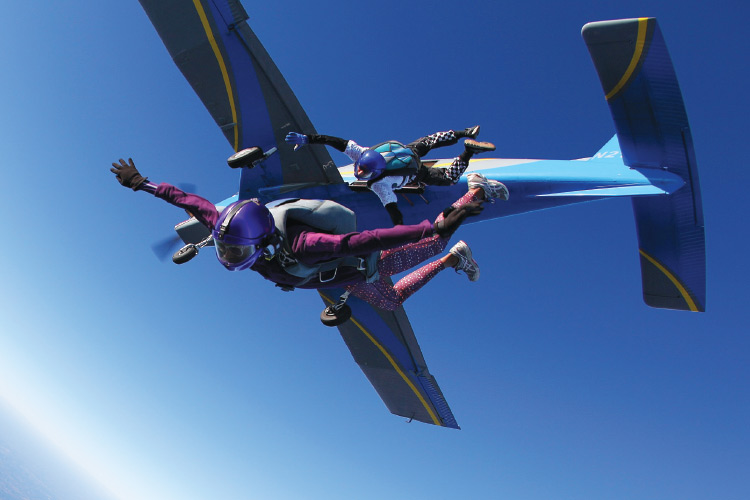 Where did the idea for Melanin Base Camp come from?

“At the time, I was looking for a community of other people of color who were excited about adventure sports. It was hard to find everyone; there wasn’t any one central hashtag. So I spent hours and hours online. I did it the hard way, scrolling through generic hashtags until I found other people of color.

How did the coalition Diversify Outdoors form?

I started meeting other people who were doing the same thing. I think 2016 was just the year people were like, ‘Hey if I can’t find this community, I’m going to create it.’ At the same time, Jenny Bruso started Unlikely Hikers and Ambreen [Tariq] started Brown People Camping. Brothers of Climbing had been going at it for a few years already when I started Melanin Base Camp. I think finding other people online was really encouraging. We were all doing our separate thing on separate tracks, but we started connecting via phone calls and eventually started appearing on panels together. So we all kind of agreed to work together.

What is your goal for these platforms?

We’re not going to fix anything; we’re not trying to. We’re not going to get rid of the trolls or people who feel uncomfortable with diversity. Hopefully, that’ll change over time. That’s not an overnight project and it’s definitely not ours. We just want people to be able to see themselves reflected, whether they are black or Asian or have a disability or identify as queer, we want people to have a space where they can see themselves reflected in the outdoors.

What have you learned from this community you helped cultivate?

When I started out, I didn’t do indigenous geotagging, I didn’t do captions for the visually impaired and now I do. It took me two years of seeing other people do that who have similar outdoor diversity and inclusion accounts, seeing how they do it and hearing why it’s important, and then eventually incorporating that into my own work.

What is your advice to someone who is just starting to explore the outdoors?

When we think of the outdoors, it’s kind of a very narrow sense of what constitutes being outdoors. It doesn’t always have to be half day hikes to the mountains or a really expensive trip to Zion or Bryce Canyon. It doesn’t have to be that sort of commitment. It can be something as simple as going for a walk in the evening or going to a local park, all of that counts as being in the outdoors. I think once we redefine what we consider to be the outdoors, people will surprise themselves. At the same time, being in the outdoors can be really expensive.

We shouldn’t pretend that nature is free because nature requires a lot of gear to do it safely. If you don’t purchase all of the gear, people will be the first to tell you that you shouldn’t have been out there without a hydration pack. Well, a hydration pack costs money. So I think it’s a balance, doing small things that you feel are within your means that you feel comfortable with, like going with your friends, going with a group, going through MeetUp.com. But also realizing that things cost time, they cost money. Time is money. Time is also childcare and paid time off from work.

Who inspires you in the outdoor world?

There are a lot through social media. I am definitely inspired by Vasu Sojitra. He is a North Face athlete and he does really good advocacy work in Montana. Don Nguyen, a Vietnamese guide and mountaineer who operates out of Mount Rainier. Dani Burt, an adaptive surfing Olympian two years in a row from California… They inspire me as athletes and advocates.