The Blue Ridge Parkway is a paradox that every American should experience at least once in their lives. This iconic and historic thoroughfare tours the heart of Appalachia, offering a welcomed respite to those looking to escape the trappings of modern American life. For 469 molasses-slow miles you’ll find no fast food or amusement parks. Cell phone service is spotty, and if you drive it in the fall you’ll forgo two days of televised football. When you reach the end there is nothing there, just the beginning of another long, windy road called Skyline Drive. My wife and I reveled in this kind of escapism and planned a south-to-north tour of the entire parkway. For two days we twisted and turned up the Blue Ridge Mountains, hunting for epic Autumn foliage. Here is our trip in 10 spectacular views. 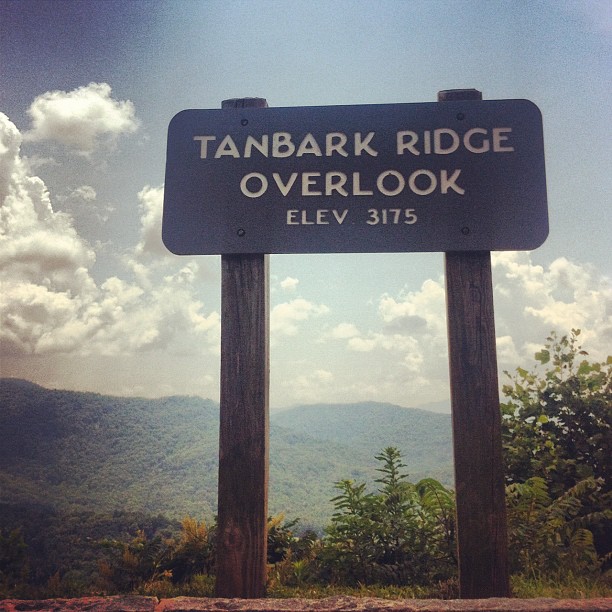 Technically we did not drive the entire parkway. We entered just south of Asheville, skipping about 60 miles of Nantahala National Forest. Regrettably, we missed a couple noteworthy viewpoints, like Devil’s Courthouse and Richland Balsam, the highest point on the parkway. About ten miles north of Asheville, near the Folk Art Center, we found Tanbark Ridge. Apparently a tannery use to occupy the site. Today an incredible view is all that remains.

Thick fog made for a challenging drive through Craggy Gardens. The descent from these misty heights revealed one the most magnificent panoramas of the entire trip. 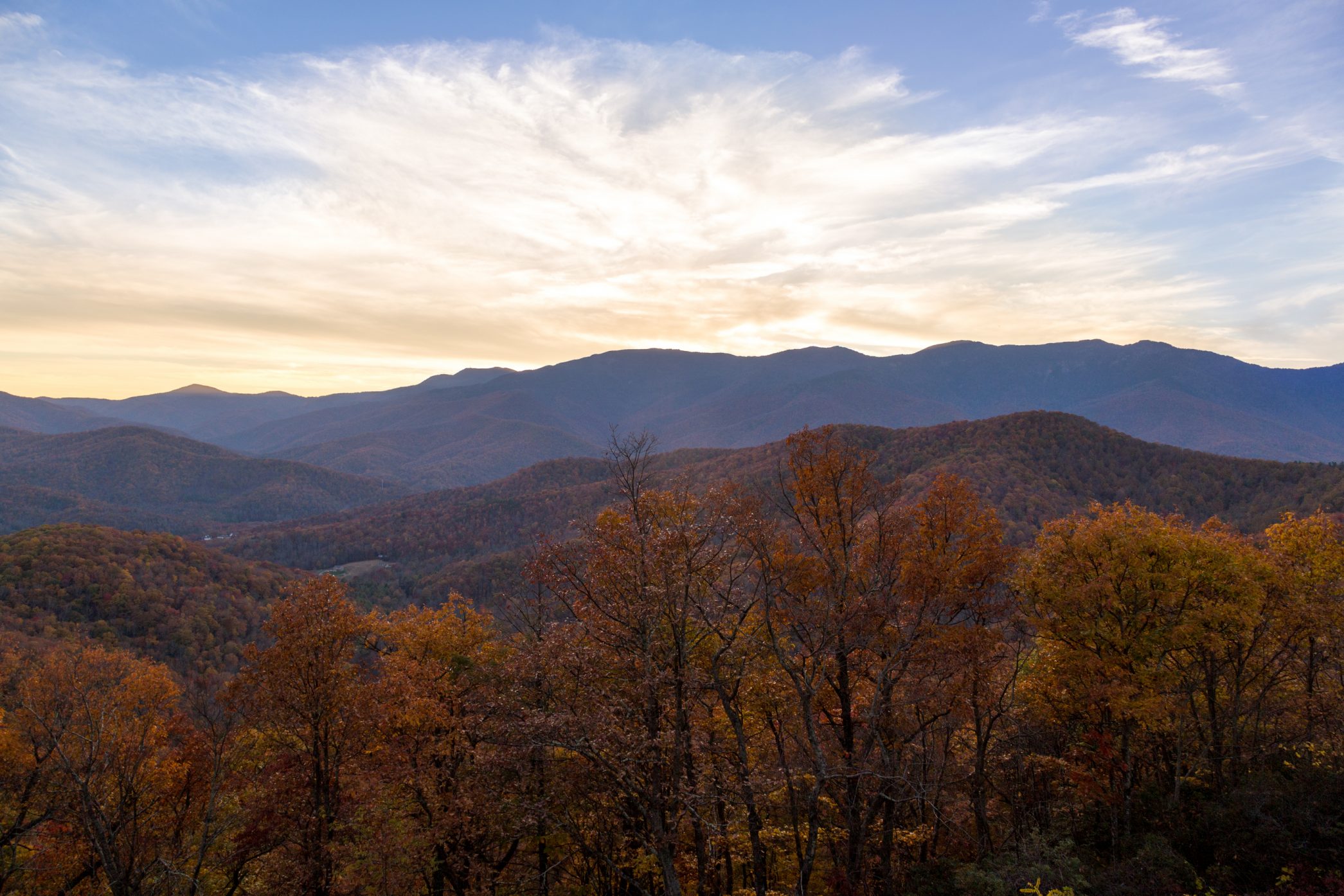 From mile marker 360 to Black Mountain Gap, we were stunned by the easterly view, where late afternoon sun, vibrant red, orange, and yellow leaves, evergreens, wispy clouds, and a shimmering Lake Burnett all played their part in a natural orchestra.

At Black Mountain Gap, a quick left turn takes you up 6,684-foot Mount Mitchell, the highest point east of the Mississippi. The contrast of the pines and maples at the entrance of the state park are breathtaking.

Thanks to its elevation the southern end of the parkway actually displayed more change in foliage than in northern Virginia. That very night a layer of ice covered Mount Mitchell. We, meanwhile, sojourned north in search of fall, not winter.

As we pushed on toward Grandfather Mountain, we were beset by blustery, fall weather. Leaves danced along the pavement, the skies darkened, and a cold, driving wind jostled my Ford F-250. Near Linville Falls we were surprised to discover two unfortunate souls standing along the roadside thumbing passing vehicles. A flurry of cars splashed by without so much as a momentary brake check of consideration. 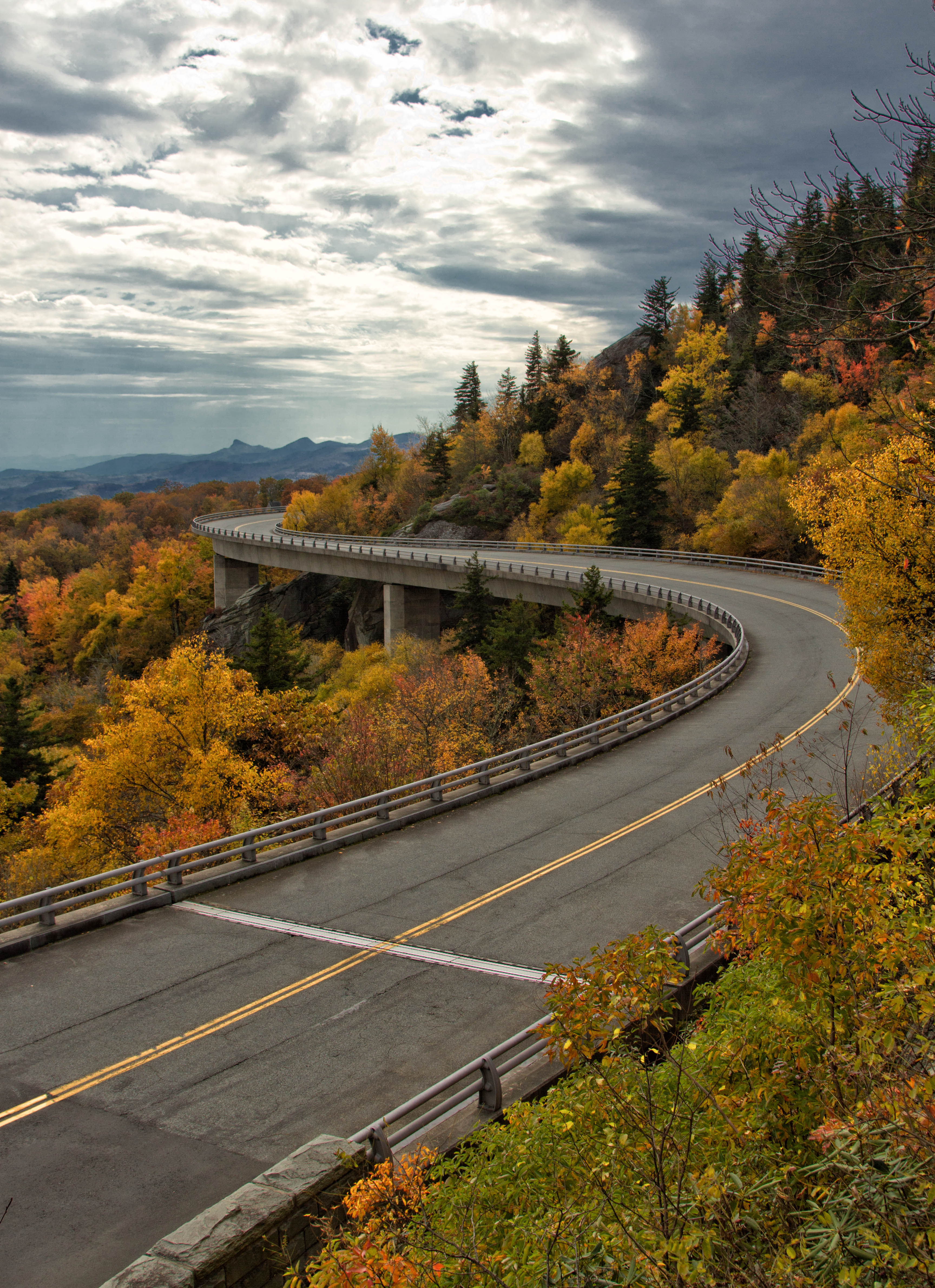 We offered them a ride, and they climbed in the truck bed. College kids from Boone, they had given up after hiking 14 miles south out of Julian Price Memorial Park. Together we crossed the Linn Cove Viaduct, one of the most iconic and exhilarating views of the entire parkway. After dropping off the hitchhikers, we made for Blowing Rock, where we strolled quaint streets and spent a cozy night wrapped in sleeping bags in the back of the truck. 60-mph winds rocked us to sleep.

The next morning we sipped coffee and ogled over old pioneer cabins dotting the parkway between the Northwest Trading Post and Doughton State Park. 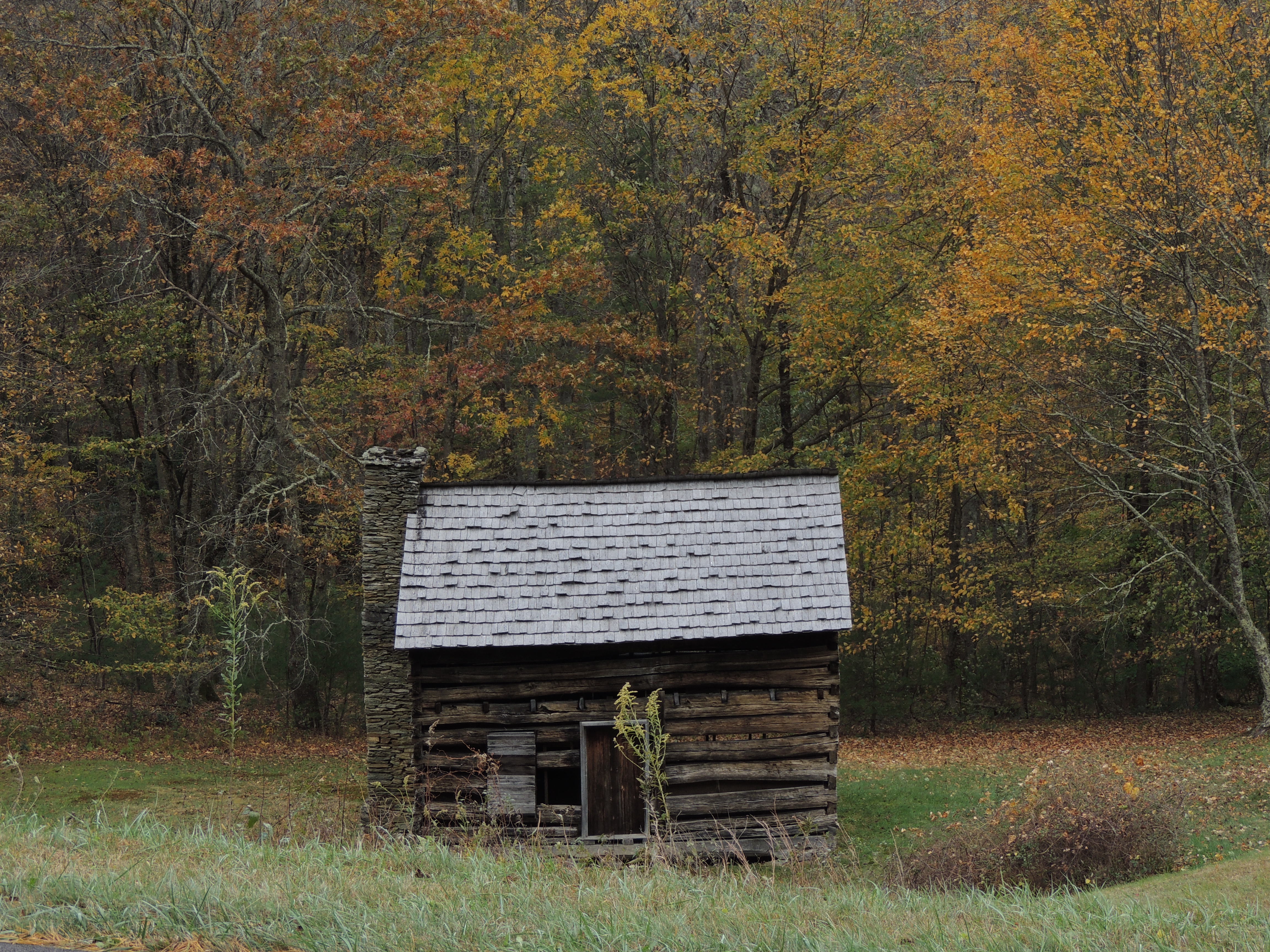 Some were mysterious and history-less, while others included exhibits complete with park rangers working old looms and crocheting. The Brinegar Cabin was especially picturesque. The morning sun poured through the canopy and the spirit of harvest time wafted on a swirling breeze.

The views at the Blue Ridge Music Center were not nearly as stunning as any one of dozens of high-reaching overlooks, but when you’re eyeballing bright red sourwoods in the comfort of a rocking chair and you can hear the twang of mountain music, the museum’s porch is indeed special and worth a nice long tarry before crossing the state line into Virginia. 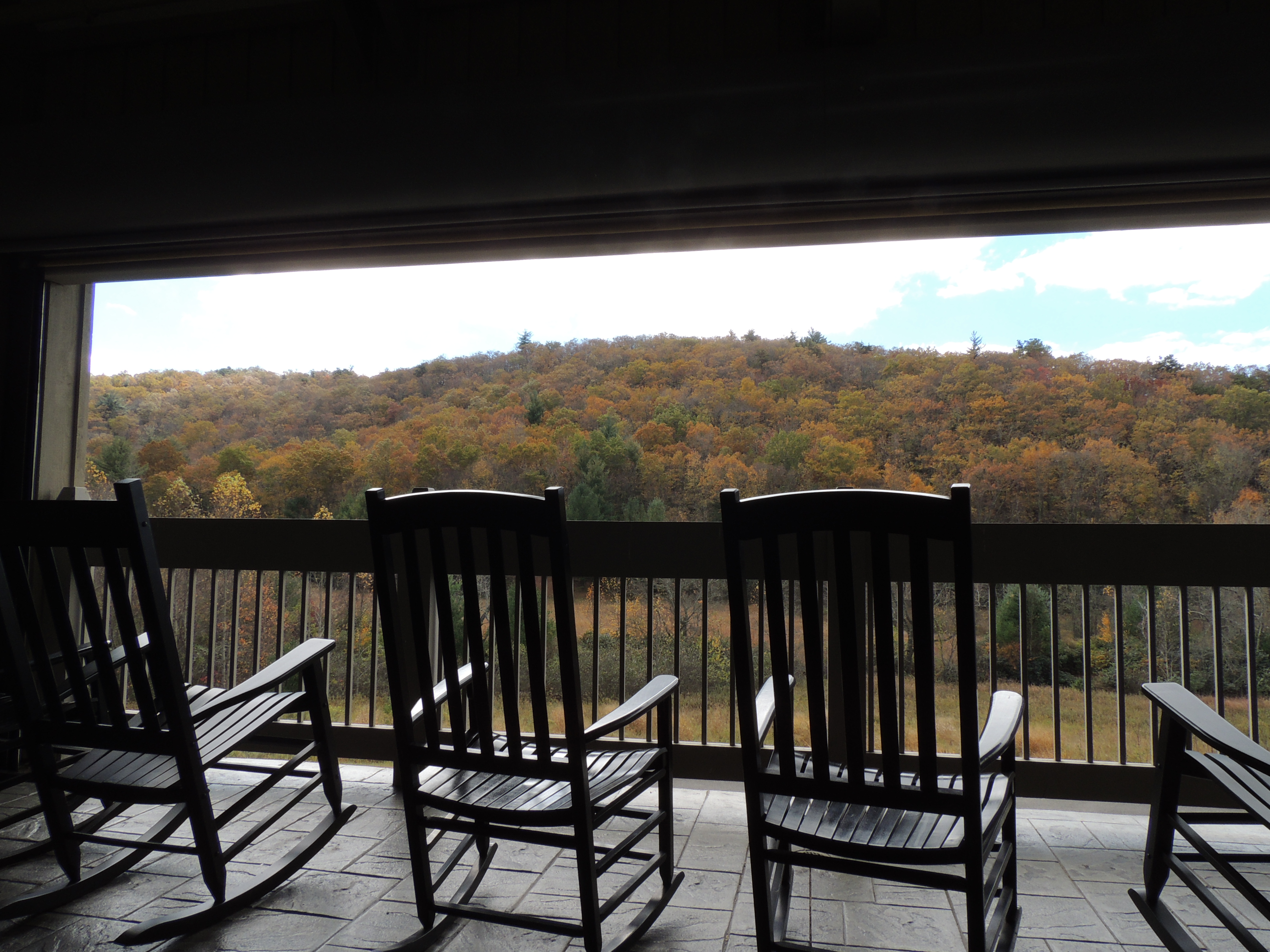 “Welcome ta Mabry County and Mabry Country Store. Where you folks from? Make sure you sign the guest book. There’s a lady sellin’ cornbread and homemade pinto beans out back.”

The Mabry Country Store is the best cultural viewpoint on the parkway. When everything else turned into a museum, Mabry Country Store kept on selling canned goods, apple pie, and postcards with FDR on them. In the yard behind the store, a few vendors purveyed homespun goodies. Here we met Karen J. Hall, author of several books about North Carolina quarries and the Blue Ridge Parkway. She told us about a quarry near Mount Airy that can be seen from outer space and how her favorite views were just up the road. “It’s just a sea of gold from Peaks of Otter up to Otter Creek.”

At the Peaks of Otter Lodge we ambled around Abbott Lake before slinking up to lodge bar, where we inquired about the drive time to Charlottesville. “Well it’s about four hours to Virginia Beach,” the bartender told us. Fearing waylay at the lodge and realizing our bartender would be no help in negotiating the road ahead, we abandoned our beers and headed back out – and just in time. The late afternoon sun slanted in and burst yellow through maples, sassafras, and birch trees – sea of gold indeed, Karen J. Hall. 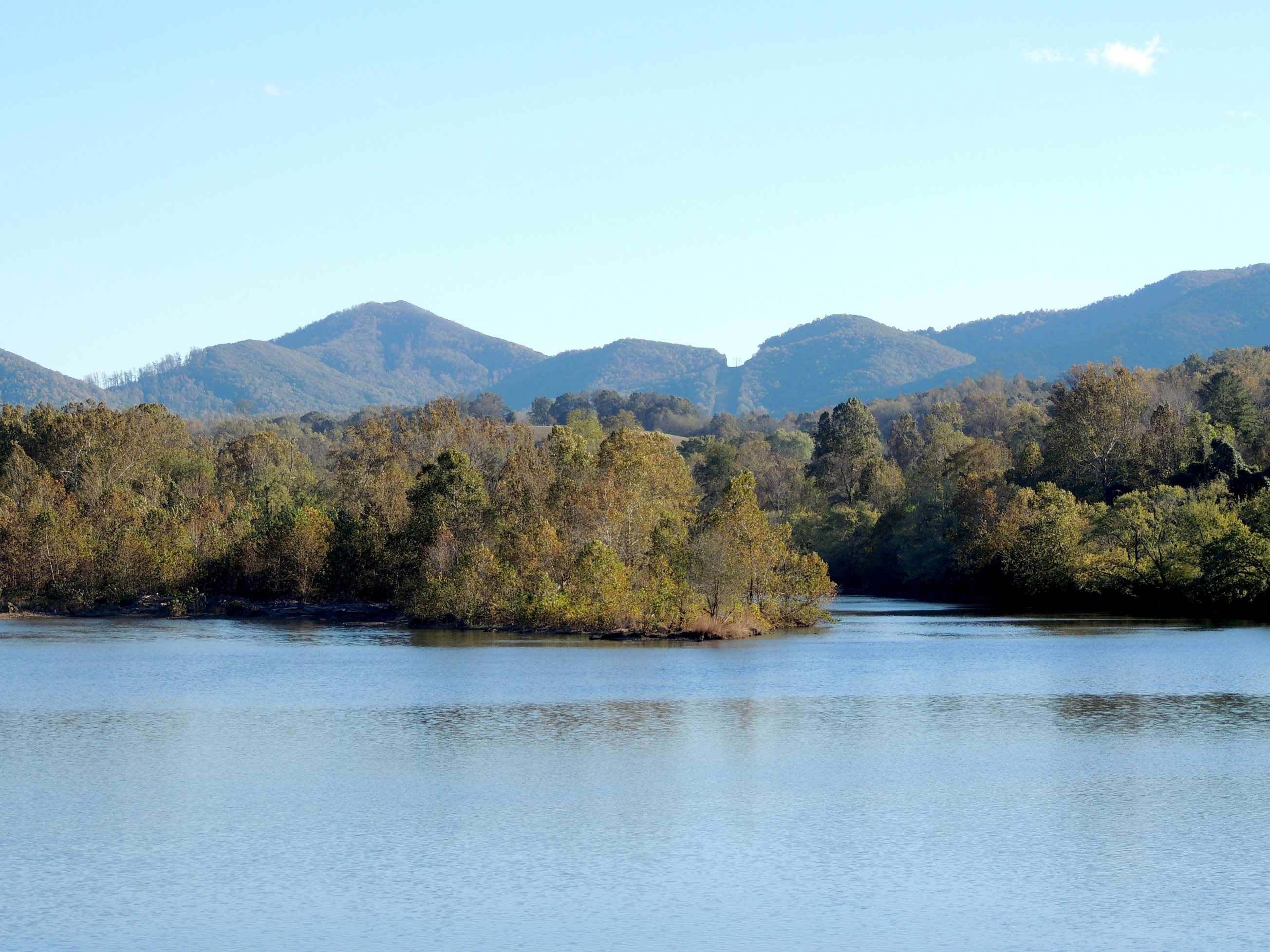 The James River is the lowest point on the parkway. At 649 feet the color change was still minuscule in mid October. Nonetheless, the bridge over this storied waterway proffered a remarkable view. It was plain to see that in two weeks, the James River’s rocky banks would be ablaze with color. Before departing, a park ranger, ironically named James, gave us a fascinating lesson on early 19th-century river barrages. When I played with his model barge I accidentally broke the little wooden boat master. A bad omen, I would later discover.

Fearing we would miss sunset, we sped through a long series of switchbacks toward Humpback Rocks. We pulled into the overlook just as the sun was falling behind the Great North Mountains. 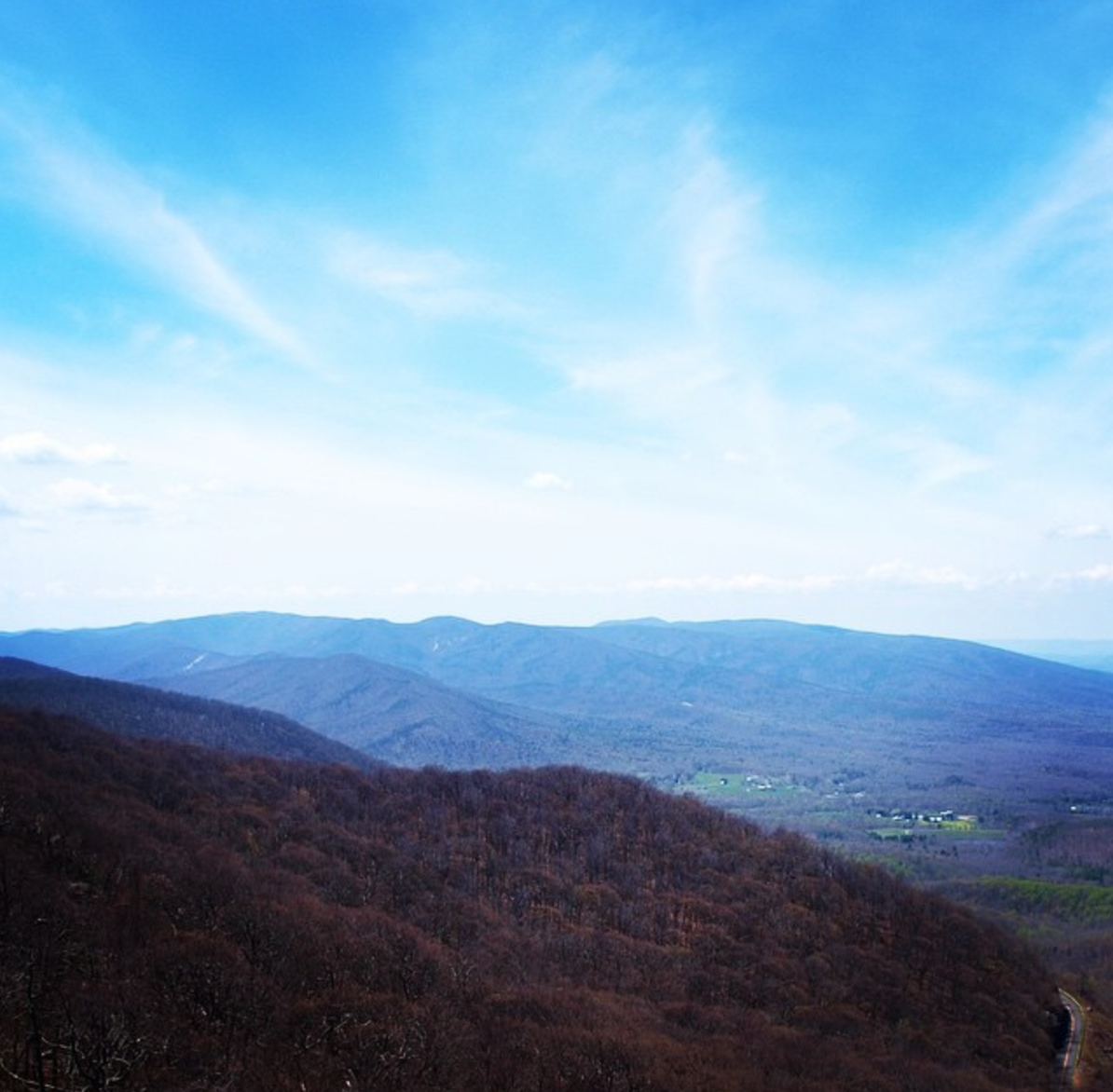 In a frenzy of excitement, I unwittingly parked in about 10 vehicles. As I raced about the rocks snapping photos a small riot nearly broke out, and with that we were back in modern America. We drove on to Charlottesville in just 30 minutes, where we forgot about the melee at Humpback Rocks and slept soundly in the truck bed to visions of oak and blackgum leaves. Two long, Autumn days on the parkway does funny things to a person. Nowhere to go, nowhere to be. Just another bend in the road.