Go Outside6 Adventure Breweries in the Blue Ridge

6 Adventure Breweries in the Blue Ridge

Life wasn’t always this good in the Southern Appalachians. There was a time, not that long ago, when friends would have to “smuggle” New Belgium’s Fat Tire back across the Mississippi River on the tail end of ski trips to the Rockies. Hell, it wasn’t too long ago, that people had to smuggle Coors back from Colorado. Seriously. Coors. That’s how bleak the beer landscape was in the South “back in the day.” Now look at us. There are more than 100 craft breweries making beer in North Carolina alone. Ditto Virginia. Not only is the Southern craft brew scene evolving, but big Western craft breweries are moving in as well (see sidebar). And some of these breweries, both big and small, are located on the edge of the South’s most iconic adventure. That’s where this guide comes in, because beer goes better with adventure and vice versa. That’s a scientific fact. You can’t argue with science. So we’ve picked six perfectly placed breweries that you can hit after a perfect day outdoors, whether it’s kayaking the coast or knocking out an epic day hike on the A.T.

Devils Backbone has outgrown its original basecamp location, moving most of its production to a much larger facility, called the Outpost, in Lexington, Va. But the party and the adventure can still be found at DB’s Basecamp. We’re talking about a brewpub that’s surrounded by 100 pristine acres at the base of Wintergreen Mountain and Resort within a stone’s throw of Three Ridges Wilderness. Devils Backbone has done its best to bring the area’s surrounding adventure scene into its brewery, developing its own 5K running and biking trails. DB has even fostered a solid connection with Appalachian Trail thru-hikers, picking them up from nearby Reid’s Gap and letting them camp in the Meadows for free. Thru-hikers even get a discounted breakfast the following morning. And you don’t have to leave the brewery’s property to find adventure; Basecamp hosts a series of trail runs and bike rides throughout the year.

DO THIS: There’s road cycling galore, thanks to the country roads that intersect the Blue Ridge Parkway nearby, and DB Brewing even organizes a road ride from their Outpost in Lexington to the Basecamp in Roseland. But you can’t beat the backpacking inside Three Ridges Wilderness. Knock out a 15-mile loop using the A.T. and Mau-Har Trail that hits big vistas, waterfalls, and backcountry campsites.

DRINK THIS: DB Brewing is now canning (thank God), so just about anything the brewery makes works as a post-adventure beer. But check out their new Trail Angel Weiss.

You want a good location? How about a brewery in downtown Bryson City, about three miles from the border of Great Smoky Mountains National Park? Nantahala Brewing Company’s choice location puts you on the precipice of some of the South’s most renowned adventure. If one of the greatest national parks in the system isn’t enough for you, drive 20 minutes down the road and paddle the class II-III Nantahala, or pedal 20 miles of sinuous singletrack at Tsali Recreation Area. Or hell, paddle Lake Fontana and look for cliff jumping opportunities. And NBC fosters that connection to the outdoors with their Trail Magic Series, a rotating series of big beers brewed in homage to the hikers plugging away along the Appalachian Trail, which follows the mountain crest through GSMNP, not far from NBC’s brewpub.

DO THIS: You have about 900 miles of trail to choose from within GSMNP alone, but the Lakeshore Trail, which runs for 45 miles along the edge of the Tuckaseegee River and Fontana Lake, offers water-side camping and enough history to fill a book. This multi-day backpack gives you the opportunity to swim secluded coves and explore ghost towns and former mine sites.

DRINK THIS: Noonday IPA is the go-to beer from NBC, thanks to its punch of grapefruit on the nose and dry finish. If you can find one, pick up a big bottle of their latest Trail Magic, or go even bigger with an 8-Foot Drop Double IPA, which packs a high gravity punch, but also a hint of wildflower honey.

Mountain State’s original brewpub, in Thomas, West Virginia, doesn’t look like much from the outside, but the two stepbrothers who founded this brewery in 2005 are true pioneers in the Southern craft beer scene who had the guts to open a brewpub in a town of 568 in a secluded valley far from any interstate in West “by God” Virginia. Hell, they even built this unassuming brewpub with their bare hands, using stones and timber from nearby sites. Legit. And the beer is good. Almost Heaven is an amber that has “gateway beer” qualities similar to the legendary Fat Tire. As for that remote West Virginia valley, it happens to be home to some of the state’s most rugged adventure, from backpacking the Dolly Sods to paddling the class V Upper Blackwater River. And those stepbrothers have turned their simple brewpub into a powerhouse, opening two other locations in the last few years, and are in the midst of a massive expansion that will triple their production. Mountain State is even growing their own hops now, which you can taste in the Homegrown Wet Hop IPA.

DO THIS: Timberline Resort’s lift-served downhill mountain bike terrain is some of the best in the South, with tight, hand-cut singletrack that drops through rock gardens, glades and the occasional, but rare, sweeping berm. Check out the top of the mountain for big boulder drops and whimsical bridges too.

DRINK THIS: Almost Heaven amber is a winner any time of year, but check out one of Mountain State’s summer seasonal Dolly Suds, a cranberry wheat beer that combines the Belgian wheat’s signature light, effervescent qualities with some vaguely fruity raspberry notes. Oh, and it’s named after nearby Dolly Sods, arguably one of the best backpacking destinations in the South.

Sure, Appalachian Mountain Brewery has a great location (more about that in a minute), but AMB is on this list mostly because we like the cut of their jib. The brewery offsets their electricity use with 5,000 watts of solar panels, donates a portion of their profits to a variety of water quality and water access non-profits, installed a bike barn at their taproom to promote more biking, and make a habit of brewing beers that benefit local events and groups, from Blood Sweat and Gears to the Blue Ridge Conservancy. They even have a biodiesel/solar panel food truck that sources everything from local farmers. Community involvement and social responsibility is a key part of Appalachian Mountain Brewery’s business plan. And we dig that. Now, about that location. AMB sits in an unassuming commercial zone in Boone, within striking distance of some of the state’s most iconic adventure. The Linville Gorge, the Roan Highlands, Wilson Creek…it’s all just down the road.

DO THIS: You can spend days, or weeks, in the High Country surrounding AMB and never exhaust the adventure to be had. For a quick hit only a few miles from the brewery, head to Rocky Knob Bike Park just east of downtown, which has eight miles of progressive singletrack with all of the wood bridges and boulders you can handle, along with a killer pump track.

Oh, and AMB has been integral in raising funds for Rocky Knob, too.

DRINK THIS: AMB has a few different flagship beers, but Long Leaf is the standout, and is easily one of the best IPAs brewed in North Carolina. And you can get it in tallboy cans built for stuffing in your backpack. 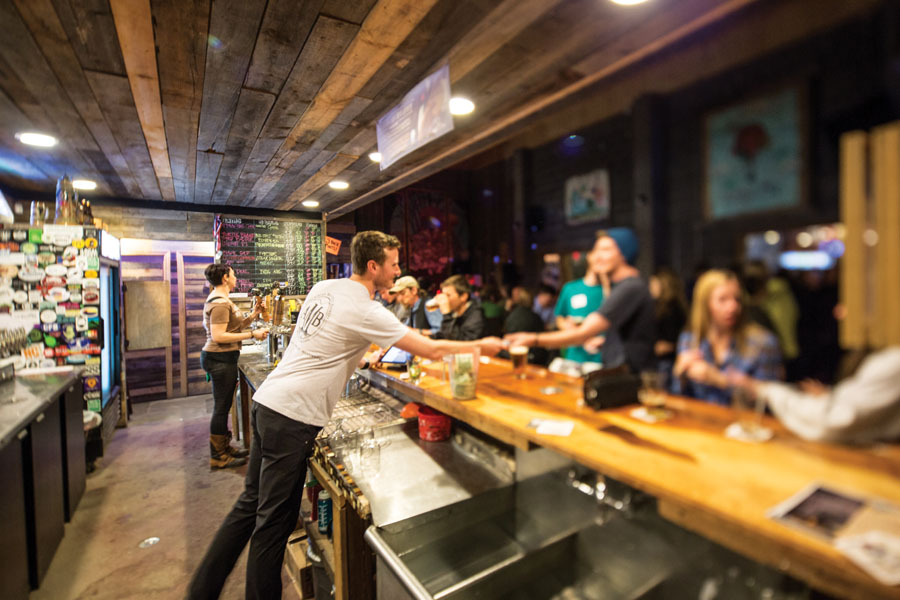 Brothers Frank and Chris Moeller had outdoor adventure on their minds when they were building Flying Mouse, from the location (it’s only half a mile from the Appalachian Trail, and sits directly on the TransAmerica 76 Bicycle Route), to the packaging—no glass, everything in cans, and stainless steel growlers to go. The brewery sits on 15 acres between the two tiny towns of Troutville and Daleville, with its own trail circling the property that’s used for cyclocross races. The Moellers wanted to bring adventure into the brewery, and it’s worked as countless cyclists and hikers find their way into The Flying Mouse from spring through fall. The beer they’re brewing on a 20-barrel system is also designed for adventure; each style is built to be sessionable and easy drinking, the perfect way to end a big hike or bike ride.

DO THIS: Not all sections of the A.T. are created equal, but luckily, Flying Mouse is close to one of the most iconic destinations along the entire path. We’re talking about McAfee Knob, that protruding plateau of a rock that has earned the title of “most photographed spot on the A.T.” You can start at the brewery and turn it into an overnight backpack by staying at the Pig Farm Campsite near the McAfee Knob spur trail.

DRINK THIS:  Just about everything Flying Mouse brews is perfect after a long hike, but we like Flying Mouse 3, which takes the light, crisp characteristics of a Kolsch-style beer and adds a more robust body and a slightly sweet layer. And keep an eye out for a new wheat beer that Flying Mouse plans on canning this summer.

Backshore Brewing is small, brewing tiny batches (about four kegs at a time), but they manage to knock out a solid rotation of beers (Belgian Dubbel aged on blackberries, anyone?), and they do it in a really sweet spot. Backshore (formerly known as Shorebilly) sits on the boardwalk in Ocean City, Maryland, near some of Ocean City’s most storied beach breaks. And Backshore embodies that surfside lifestyle, from the vintage VW bus out front on the patio to the skateboard decks next to the bar inside. And you gotta love the brewery’s motto: “Brewed in the salty air with our toes in the sand.” Backshore is only open on weekends, so plan accordingly. 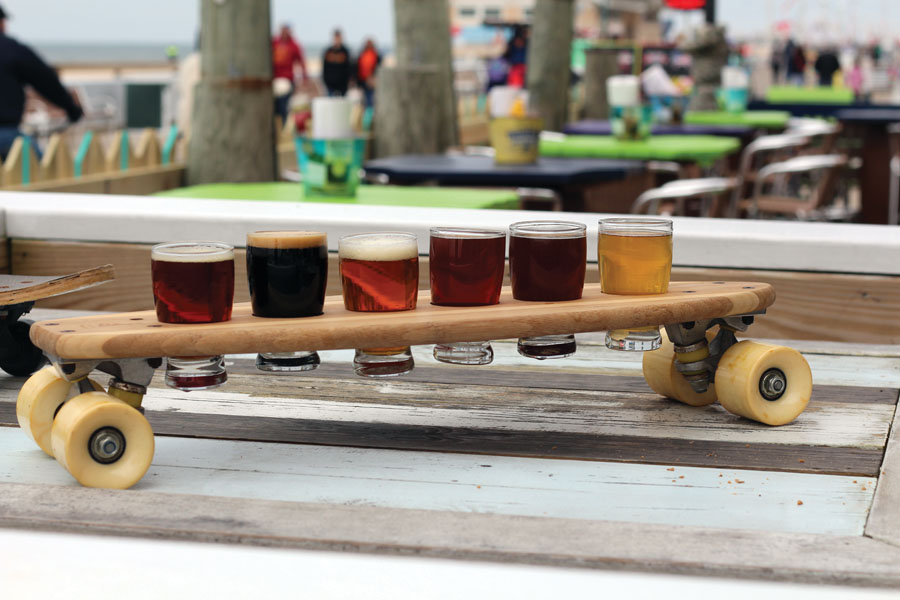 DO THIS:  You have surfing just across the boardwalk from the brewery, but the real adventure lies to the south, just across the inlet. That’s where you’ll find Assateague Island National Seashore, a 37-mile long barrier island with sandy beaches facing the Atlantic Ocean, and salty marshes and sinuous channels to explore on the bay side. Wild ponies, beach camping, paddling and surfing…Assateague offers a wild island escape only a few miles from quality beer at Backshore.

DRINK THIS: You’re at the beach, so don’t get too crazy. Stick with Backshore’s Boardwalk Blonde, an easy-drinking ale that comes in at a sessionable 4.3% ABV. And you pretty much have to order the Magnum P.A. (pale ale) because, you know, Magnum. They offer some of their flagships in cans, too, which makes it easy to stock up for a trip to Assateague. And check out their newest creation, called Hoop Tea, which is an all organic, tea-based malt liquor that comes in at 4% ABV.