Once a year a ragged and equally rowdy group of mountain bikers gather in an area of the national forest, other wise known as “Foof Town.”  A group of 40-plus riders started rolling into the “Mallard Duck” at approximately 10 A.M. Thursday, greeted by Appalachia’s finest camp site director whose only two rules for the camp ground were: 1. Do what you want, and 2. Have a darn good time doing it.

With that being said, we all saddled up and party paced over to the base of our first climb, where we all became unsuspecting victims of the misery our tour leader had in store for us. The first day was atypical of the giro, in the sense that it was now a full day of riding, instead of a half day.

Day one consisted of a dirty double and single track climbing on forest roads so steep they could make a mountain goat cry, followed by piercing some forest foliage and sneaking through the “worm hole” to race our first Super D descent. 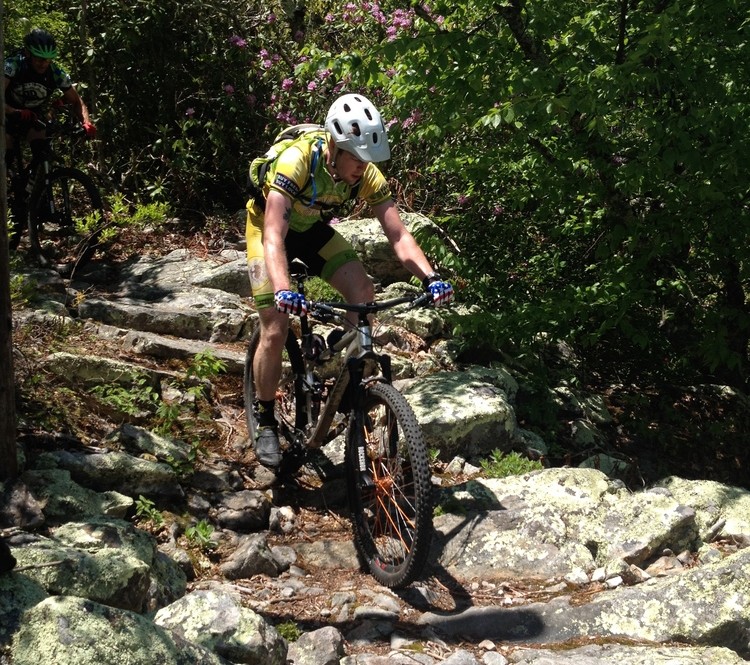 Day two started with another demoralizing climb up to the parkway that was sure to move many riders into Slum Town for the rest of the weekend.  If the climb didn’t do you in that day, the second stage surely would, Whetstone Ridge.  The stage started with us hiking our bikes into the trail to get out of the national park and into the national forest (a warm up for hike-a-bikes to come).  It was a demonstration of sorts, with a local law enforcement escort, in hopes to raise awareness of the trail user conflict that loomed over this ridge’s trail head for years!  Whetstone ridge was an experience like no other, with hike-a-bikes so steep, pushing your bike up them was daunting, The other sides were steep, loose chundery death shoots that were sure to make you smile!

Day three started off with a transferring of campsites, followed by ample amounts of “lizard time” (slumming on our camping mats in the sun, motivating to start the day).  After fully recharging, we saddled our bikes and rode out of camp, up the Blue Ridge Parkway, and on to Torrey ridge, my favorite section of trail!  With Fast loamy pine corridors, and rippin rock gardens, it was sure to be a magical time, as many of us started to get our tour on becoming permanent residents of slum-town.  After Torrey ridge, we pitted at camp and set out for some hot laps at Howardsville trail system, a series of short, punchy, loose and leafy climbs, sure to make even the strongest of legs weary. 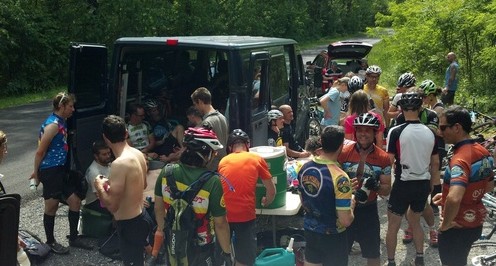 On day four,the final day of the tour, we were greeted with two stages that were sure to welcome us all into the pain cave. Today we would climb back up Torrey Ridge, and we all knew we were in for punishment.  Some of us questioning why we joyfully signed up for the punishment ahead! After Summiting the mountain and relishing an extended lunch, we started to separate into our team time trial groups based off of zip code.  We would race from the top of Bald Knob to the bottom of Coal Road, a 45 minute chunky sandy loose descent that challenged us all after four full days of riding.

With so much suffering throughout the week, some would question, why bother participating in such an event?  Though the event is physically demanding and at times absolutely soul-crushing, the community that develops after living in a tent city for four days is absolutely incredible. Though days on the bike were long and grueling, the evening’s celebrations were as rewarding as the trails themselves! For those who have ever been curious about a grand tour in the Shenandoah Valley, my only advice is “Come get your Tour on!”